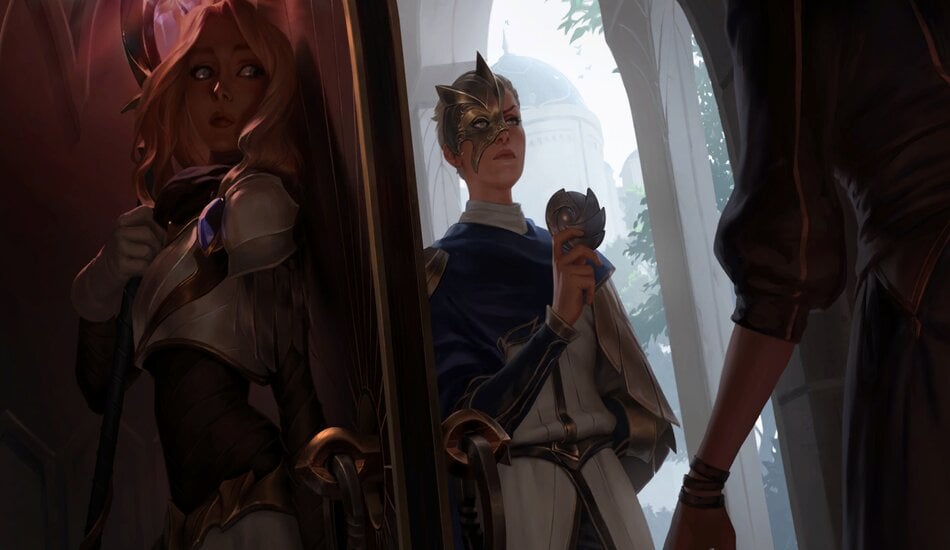 A rework has been applied to Legends of Runeterra champions Kalista and Hecarim, along with many minor alterations to various units and spells in the 0.9.2 patch.

The LoR team continues its nerf and buff trend in patch 0.9.2 with a bunch of minor changes and tweaks that are intended to reduce overpowered champions like Hecarim while increasing Expedition and Constructed play to Poro archetypes.

Failing to perform at levels the LoR team was satisfied with, Kalista has received a buff in Patch 0.9.2. Hecarim, on the other hand, has been reworked with a nerf and buff after overperforming in the meta.

Following LoR Patch 0.9.1, Kalista was the least played champion. Her buffs are designed to improve her playability in Ephemeral and Fearsome Aggro decks.

The adjustments made to Hecarim reduce the champion’s ability to perform as a finisher when combined with other regions but strengthen him when played in Ephemeral builds.

The nerfs to Hecarim include Spectral Rider receiving a power reduction from three to two.

To shake up the LoR meta, buffs were given to three Mageseeker units. And due to Elnuk’s RNG madness, the Freljord beasts suffered a slight nerf. Nerfs were also applied to Navori Conspirator and Chump Wump. Border Lookout was given an upgrade into the Dauntless Vanguard, now named Vanguard Lookout, and classified as an Elite unit.

Mageseekers serve Demacia by removing spell casters from society. Ironically, they often use magic, making them an ideal fit in LoR spell archetypes. Adjustments were made to improve gameplay with champions like Lux, relying on players to cast spells that cost six or more.

A nerf to Crowd Favorite was bound to happen after performing too well in Noxus aggro builds. The go-wide unit received a health reduction from two to one, slightly increasing his vulnerability.

In response to RNG playing too large of a role in Troop of Elnuks, as mentioned in the LoR State of the Open Beta, the text has been nerfed. This should prevent a large number of Elnuks from flooding the board while keeping the card still playable with certain archetypes, like Frost Control.

Considered one of the most powerful Elusive cards in conjunction with Inspired Mentor, or Omen Hawk, his power was reduced from three to two.

Chump Wump has overperformed in P&Z builds, where the region is supposed to have weak unit stats. The mushroom lover’s health was reduced from four to three, but its power remains the same.

With several adjustments made to the Mageseeker package, Unstable Voltician has also been slightly altered. Much like Mageseekers, Unstable Volitician now pops off when a player casts a six cost or more spell during the game.

In addition to Hecarim overperforming with a variety of region builds, The Rekindler has also proven to be too efficient. The LoR team hopes that an increase in its cost, from six to seven, will slow its play level down.

From Shadow Isles nerfs to multiple spell buffs that increase power levels in Poro archetypes, here are all the spell changes from LoR 0.9.2 update.

Poros was recorded as the worst archetype in Expeditions. To increase their play potential in Constructed and Expedition, several key spells were adjusted.

As noted in the LoR State of the Open Beta, Shadow Isles has proven itself as one of the most powerful regions. Several adjustments were made to spells that were heavily featured and underplayed since the last update.

Mark of the Isles

Used in Control decks, Flash of Brilliance has proven itself a tad too perficient, resulting in numerous Turrets by Heimerdinger with Elusive or Ezreal pumping off multiple Mystic Shots to an opponents Nexus for a win. A nerf to the spell keeps it worthy of playing without upsetting the balance.

Another change made in the LoR 0.9.2 update includes Rummage, tweaking the spell to improve gameplay with Jinx.