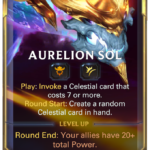 Legends of Runeterra: Call of the Mountain’s card reveal season is nearing its end.

Riot Games revealed the final champion for the first third of the new set today: Aurelion Sol. He has the new keyword Fury, which gives its user +1/+1 in stats whenever it kills another unit. Aurelion Sol also bears the Dragon tag, which allows him to synergize with the Dragon-themed cards shown off earlier today.

At 10 mana, Aurelion Sol is the most expensive champion unit in the entire game. With 10/10 stats, in his base form, he also has the highest level one total combined stats when compared to any other champion. Aurelion Sol has a play effect that lets you Invoke a Celestial card that costs seven mana or more. In addition, he has a Round Start ability that randomly generates a Celestial card to your hand. On top of his Fury keyword, Aurelion Sol innately has Spellshield, which grants him even more protection against removal. He reaches his leveled form at the end of the turn when your board has a combined total of 20 or more Power.

Aurelion Sol’s leveled form is also 10-cost with +1/+1 in stats, the same Play and Round Start abilities, and the same keywords. The new ability Aurelion Sol gains is a passive aura that makes every Celestial card in your hand cost zero mana. This allows you to play them all for free.

Aurelion Sol is the embodiment of “go big or go home.” At 10 mana, he wants you to end games quickly. And with Spellshield, it’ll be hard for your opponents to remove Aurelion Sol without sinking multiple resources into him. In addition, Aurelion Sol will continually grant you free value after playing him, putting your opponent on a clock to either win the game or slay the champ. Otherwise, they’ll get grinded out of the game.

Aurelion Sol’s main weakness is that he doesn’t have an effect that immediately impacts the board the turn you play him. This means if your opponent has a wide board and is about to swing for lethal, there’s not much he can do to protect you like a She Who Wanders could.

While leveling up Aurelion Sol sounds like a gargantuan task, the champ already has 10 power. This means no matter what, your starting point toward leveling Aurelion Sol will always be halfway there. In addition, Aurelion Sol has the Fury keyword, which slowly gives him the ability to add credit to his level up progression.

Related: Every Celestial card that can be found from Legends of Runeterra’s Call of the Mountain Invoke keyword

Aurelion Sol will join the champion roster when LoR: Call of the Mountain is officially released for PC and mobile on Aug. 26.