Yuumi, the Magical Cat, will be released on May 14

Check out all of yummy Yummi’s abilities before she hits the PBE. 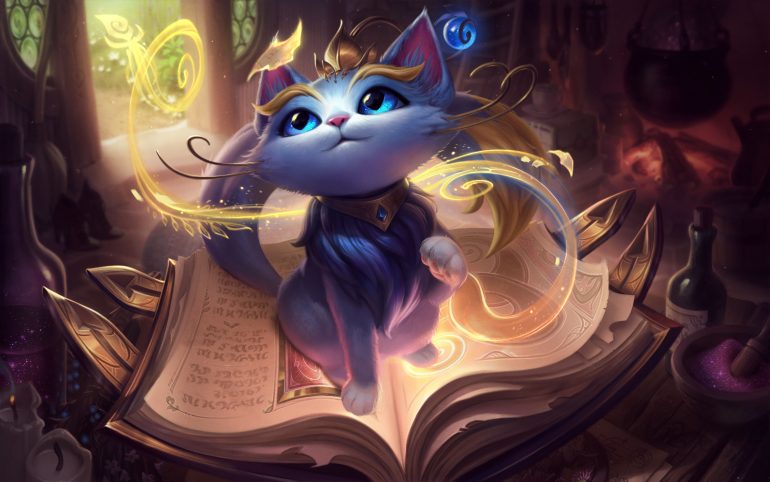 Yuumi, the Magical Cat, got quite the introduction to the world. The newest League champion was mistakenly leaked, which caused a whole bunch of speculation before we even knew what her splash art looked like or what her abilities are.

Well all of that is available now and it’s all amazing. Just look at that face. Can you imagine leaving it behind?

Apparently that’s exactly what Yuumi’s master, a mysterious mage named Norra, did. A Yordle enchantress from Bandle City—perhaps she knows Lulu—Norra left Yuumi alone with her spellbook. Left only with Book, Yuumi set out to find her master while making other new friends along the way.

Riot has been pretty adamant that Yuumi is in fact a support, and her kit definitely emphasizes that. She’s an enchanter support through and through, and one that wants to stay near her allies.

Her primary ability is definitely her W, You and Me! It physically attaches Yuumi to an allied champion, making Yuumi untargettable except by turrets. While attached, she and her ally share a percentage of each other’s AD or AP, converted into Adaptive Force. Her spells also change while attached. If she wants to un-attach or switch allies, she can recast her W with no cooldown.

As an enchanter, you’d expect Yuumi to have sustain in her kit—and she actually has two kinds of sustain. Her passive activates every few seconds to empower her next auto attack to restore mana and provide her and her attached ally with a shield. The shield lasts until it’s broken, so it’s effectively extra HP.

Her E heals both herself and her attached ally while giving both a burst of decaying movement speed. Yuumi can store two charges of the spell, making it potentially very good for chasing down people—or getting away. The heal is based off of missing health, though, so don’t waste it too much when you’re near full HP.

Her Q is a projectile that deals magic damage and, if it flies long enough, slows the target. And if she’s attached, it turns into a guided rocket that can be controlled by Yuumi’s mouse.

Her ultimate might be her most fun ability. It’s basically a Miss Fortune ult that shoots seven waves of magic damage along a straight path while rooting anyone caught by three waves. And the best part? She can move, cast E, or dash between allies with W while channeling. And since her W has no cooldown while she’s already attached, this could be a devastating combo for her to get into the middle of fights. Think of it as Rakan’s original ult, only with range and damage mixed in.

How to play Yuumi

Riot’s tips for Yuumi definitely focus on how much she relies on allies and how squishy she is by herself. She wants to carefully select when she’s by herself to zone or poke enemies, and when she’s attached. Riot said she’s great for newer players because you can just follow your ally around.

In the mid game, she also wants to be more selective about which ally she attaches to. Maybe it’s the jungler to set up an objective, or a solo laner to create a pick. Later on, she wants to create picks with her ult—the root is potentially more powerful than the damage—and provide heals and shields to her team.

Overall, she sounds like a super fun, team-oriented champion. She’ll be released to the PBE on April 30 and will ship to the full game on May 14.