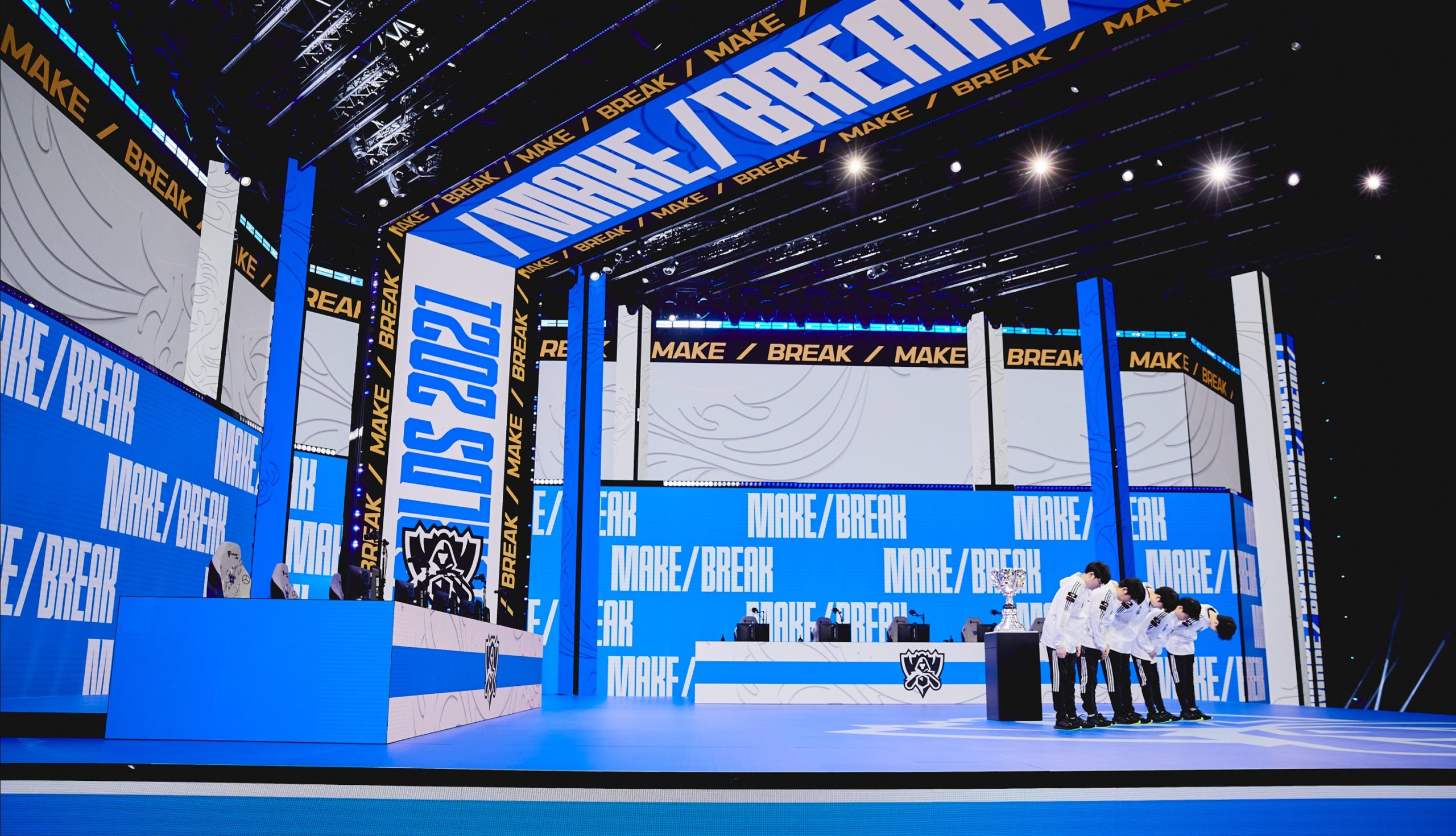 The 2022 professional League of Legends season has arrived, and with it, the slate has been wiped clean for dozens of teams in both the Eastern and Western Hemispheres.

Even by the standards of traditional sports, the League offseason is incredibly short. Just two months have passed since Edward Gaming lifted the Summoner’s Cup in Iceland, giving teams the better part of the holiday season to construct new rosters ahead of 2022. Now, with the season set to begin just two weeks into the new year, the 10-month race to the top of the professional League mountain is officially underway.

After an offseason that saw much of the global scene upended via roster swaps, cross-league trades, and the emergence of young and talented players across the world, pro League is back in full swing.

To ring in the new year, we asked our team of League writers to sit down and give their thoughts on the 2022 season before it begins to unfold. Here are some of our expectations and predictions as another year of competitive League gets underway.

Who will win the 2022 World Championship?

Tyler Esguerra: If many of these new, star-studded rosters play close to their ceilings this year, then League fans should be ecstatic. The 2022 season has the potential to be one of the most competitive we’ve seen, and the battle for the top should be incredible. But the one team that should rise from the bloodbath is Chovy and Gen.G’s revamped superteam. This top-three mid laner finally has the Ironman and Thor to his Captain America with Peanut and Ruler coming in as perfect co-stars to help shoulder the load, instead of him having to drag his team to the finish line.

Michael Kelly: The smart move would be to say Edward Gaming based on their recent world title and the fact that they managed to keep the entire starting lineup intact. But I’m willing to bet that if we replayed Worlds 2021 a dozen different times, we’d get a dozen different results. I’m not entirely sold on EDG as League‘s next dynasty, but I have a hunch they’re the running favorites right now. Still, I’d look for teams like Gen.G, LNG, and even the new-look DWG KIA to be in the conversation for the Summoner’s Cup all year.

Henrique DaMour: Repeating in League as a world champion is so unbelievably difficult. All respect to Edward Gaming, but I don’t think it will be them. LNG, RNG, and a smattering of other teams will look like contenders at any given moment, but Gen.G look like the best team in the world as of right now. Three of the five former members of Griffin’s legendary 2019 team are reunited, and with Peanut and 2017 world champion Ruler at the jungle and AD carry positions, this team looks the most poised to make a run. They have all done it at the highest level before, but enough of them still have enough of a fire under them to fuel Gen.G to a world title.

Ethan Garcia: When you think about the best League teams in the world, usually your mind quickly fixates on the LCK and the LPL due to their storied histories as Worlds winners. Heading out of this preseason after Edward Gaming’s victory at Worlds 2021, I think we can say once more that one of these regions will reign supreme in 2022. This year, however, instead of EDG and the LPL running it back, I believe an LCK team will regain the Summoner’s Cup, particularly the former two-time champions, T1. With a roster consisting of some of the best talent in the world, T1 made their presence felt on the Worlds stage in 2021, with their renowned mid laner making his grand return. Though the team isn’t experiencing any major changes bar Zeus’ return to the main roster, the consistency in its roster will likely result in T1 regaining the world championship in 2022. That’s not to put the new iteration of Gen.G down, however. These two teams will undoubtedly put on classics on their way to grasp the Summoner’s Cup, and I can’t wait to follow along.

Which team will fall the shortest of their expectations in 2022?

Tyler: Team Liquid’s new roster might look unbeatable at first glance, but there are still some concerns that have people hesitating to give their full support. Don’t get it twisted: this is the strongest lineup we have in North America on paper by far—and one of the best we’ve seen in LCS history—but we’ve seen superteams fail before and for simple reasons. For example, Liquid could run into a classic “too many cooks” situation, where these big-name talents butt heads when it comes to choosing a playstyle. Almost every player on this team was the face of their respective franchise in 2021, and now they have to learn how to share the spotlight amicably.

Michael: It’s hard not to look at such a stacked Vitality roster and wonder what their floor is going to be. This team has the potential to be one of the best western squads ever assembled, but I can’t help but worry about the possible reality where Vitality fall short of the mark that their members’ past accomplishments have set for the team. While I don’t think Vitality are going to flounder in the regular season à la 2021 G2, 2015 Elements, or other superteams of yesteryear who bit the dust prematurely, I still believe it’s entirely possible this year’s Vitality team won’t level out its hype/results ratio in the later stages of the postseason.

Henrique: Vitality is for sure the team that comes to mind, especially in a year right after what was supposed to be the greatest superteam of all time crashed and burned in 2021. But if all of those extremely talented and big personalities can mesh, I could look extremely silly because Vitality will likely be the best team in Europe by a good margin by the end of the year. But what the heck. The LEC is one of the most exciting regions in the world in large part due to the amount of hungry young talent it pushes out, and there will be a roster that is hungry enough and play loose enough to shake Vitality out of their comfort zones and become the next MAD Lions. If that happens, the Vitality project would have to be deemed a failure.

Ethan: If there’s one thing about DWG KIA that proves true every year, it’s that the talent they bring in become some of the best players in the world during their time on the team. This year, the former world champions that made it to the Worlds finals again last year are bringing on three new players: Burdol, deokdam, and Kellin. Burdol is a great example of already stand-out talent that can grow his ceiling even further as a part of DWG KIA. Deokdam and Kellin together brought NS RedForce great success in 2021, but have never ventured outside of regional competition, something that DWG KIA is used to doing. Replacing Ghost and BeryL is a giant undertaking, and one the team has not had to deal with in quite a few years. While the team may stay afloat in the LCK’s regular season with their collective potential, it’s international experience that stands out between the tenured players and the new faces.

Which player will hold the title of “Best in the World” at the end of the year?

Tyler: A handful of new faces might have joined DWG KIA this past offseason, but the most important part about this coming year for the organization is that they were able to keep the best mid-jungle duo in the world together. One half of that duo is Canyon, who strives to continue his campaign towards G.O.A.T status by pushing DWG KIA to even more regional championships in 2022. Smart, aggressive, and downright destructive in mechanical skill, this 20-year-old phenom is only getting better as the seasons go by, and in a meta where junglers can decide victories over losses, the best player in the role will be in the spotlight from now until October when Worlds kicks off.

Michael: I firmly believe that this is finally going to be Chovy’s year. The guy has been a perennial talent for each of the last three seasons, but with a serious team around him this time—one that could easily contend for the Summoner’s Cup—Chovy might finally have enough stature to finish ahead of players like ShowMaker, Viper, and other top-tier players who have only outpaced him thanks to their international results.

Henrique: Canyon could very easily win this and remind everyone in the esport and its painfully short attention span that he’s still the best player in the world. But he’s got a larger load to lift on a re-vamped DWG KIA squad. LNG jungler Tarzan, meanwhile, is already the best jungler in his region, and will have a much lighter load to lift on a roster that, with the addition of Doinb, went from great to excellent overnight. That mid-jungle duo is going to be a must-watch, even if it might take a while to gel. Doinb will facilitate at a high level, while Ale especially, as well as Light and Iwandy, will take steps up, but Tarzan will steal the show.

Ethan: For a player to be touted as “Best in the World,” they should belong to a team in which they’ve consistently held their own, standing out individually while also maintaining their spot in well-balanced coordinated team play. That being said, my eyes are locked on Chovy finally getting the recognition he deserves this year. While other best-in-the-world contenders hail from the mid lane, such as Faker and ShowMaker, Chovy made it his agenda in 2021 for the world to learn his name—and the world is now never going to forget it. Constantly raising the bar for what is expected of a professional League player is just a normal task for Chovy, and for that reason I believe, by the end of 2022, there will be no contest in calling Chovy the G.O.A.T.