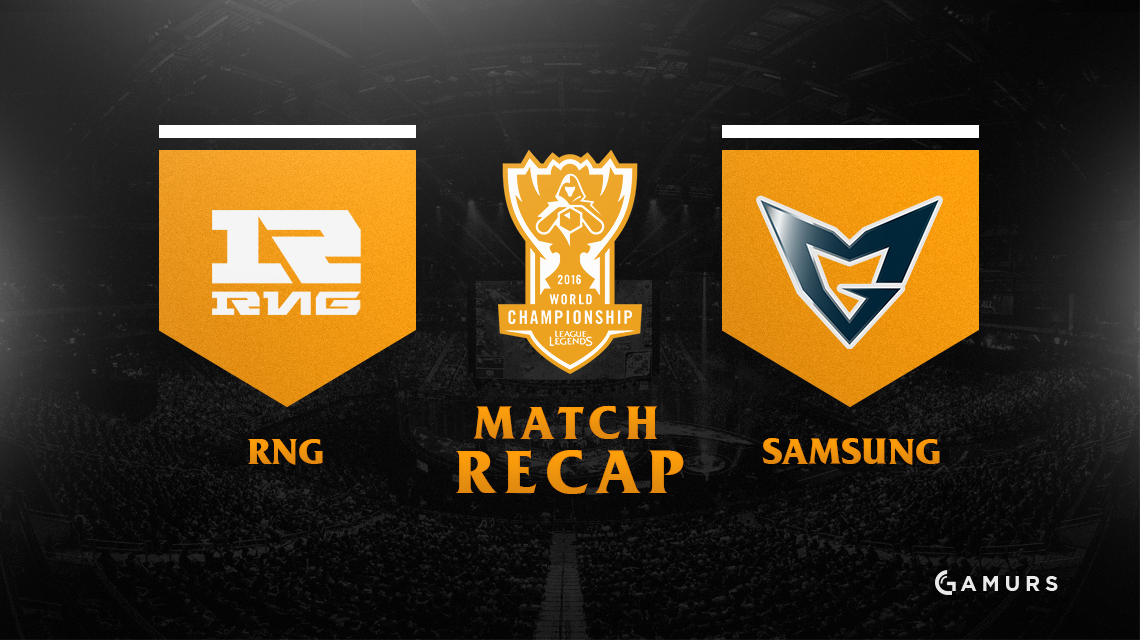 After Samsung secured first blood on Uzi courtesy of a successful Skarner gank by Kang “Ambition” Chan-yong, Liu “Mlxg” Shi-yu desperately tried to trade back a counter-gank kill but ended up pointlessly dying, giving two kills to Ambition’s Skarner by six minutes. Despite an early death, Uzi was able to maintain a CS advantage throughout the laning phase.

At the 24-minute mark, Samsung took Cloud Drake and, with an effective engage by Ambition, took a four-for-one teamfight in their favor, largely due to Lee “CuVee” Seong-jin’s Kennen ultimate. Samsung then elected to take Baron and extend their lead by gaining deep vision around the map and finding picks.

By 30 minutes, Samsung Galaxy, utilizing their near 10k gold lead, won a teamfight in RNG’s top-side jungle and broke the base of RNG. Improbably, Samsung was actually able to close the game in their first push into RNG’s base due to superior itemization and Park “Ruler” Jae-hyuk’s turret damage on Jhin.

Royal Never Give Up played uncharacteristically, in that bot lane duo Uzi and Cho “Mata” Se-hyeong couldn’t have much of an impact in teamfights and were on the back foot for most of the game. This, compounded with Ambition’s masterful Skarner carry performance, led Samsung Galaxy to a surprisingly dominating victory that sends both RNG and Samsung’s preliminary records to 2-1 heading into Week 2 of the Group Stage.