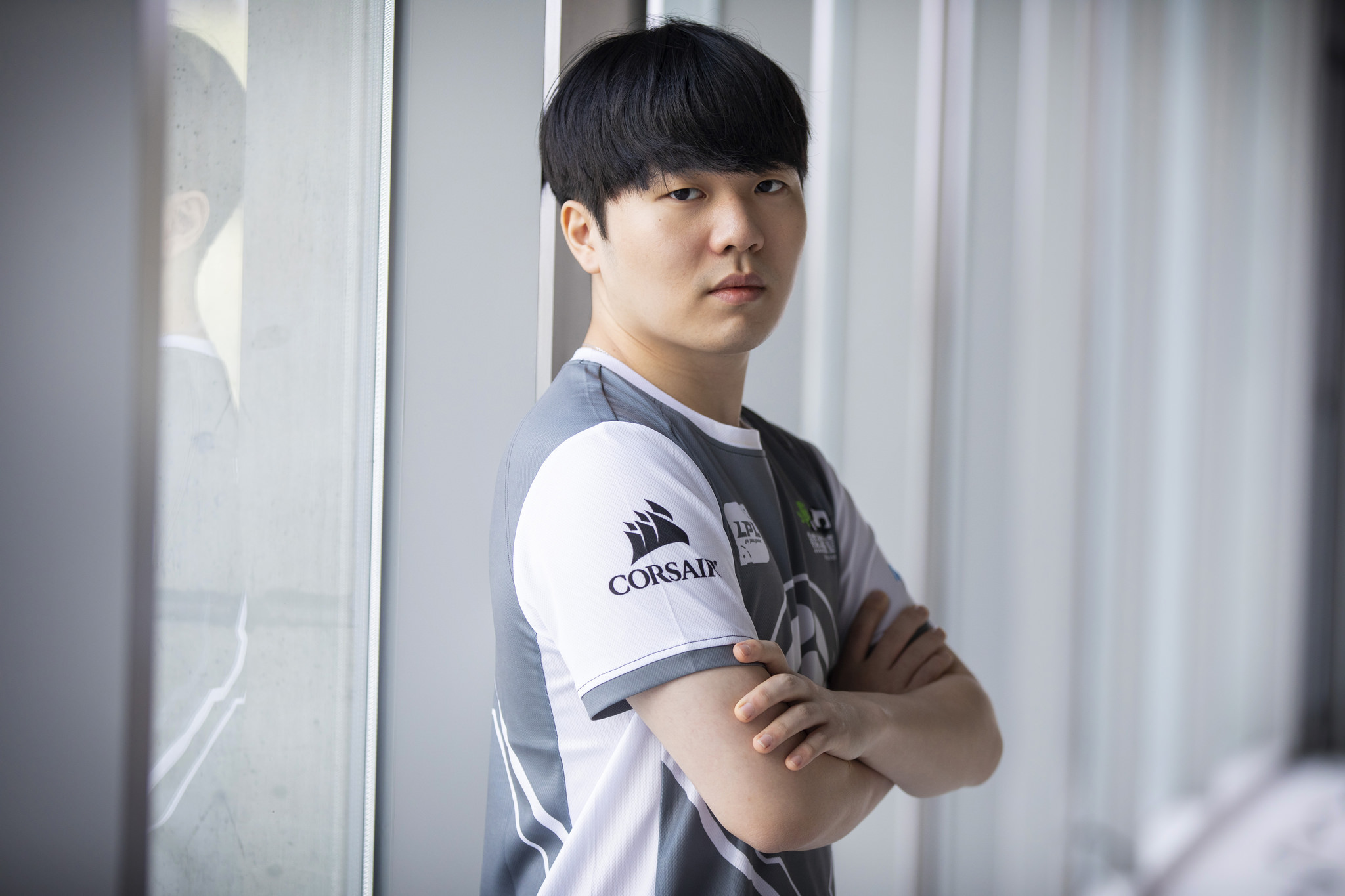 When Song “Rookie” Eui-jin left Korea for China four years ago, he was unknowingly blazing a trail. He was one of the first League of Legends pros to make the transition from the LCK to the LPL as part of the Korean Exodus.

Many followed in Rookie’s footsteps, including bigger names like Cho “Mata” Se-hyeong and Jang “Looper” Hyeong-seok. But none made an impact as big or lasting as Rookie’s in their adopted country. Rookie hasn’t just become one of the best players in the world—he’s developed an intensely loyal fan base in China, absorbing the language and style of his new home. He’s now one of the most beloved League pros in the country.

That makes Rookie’s triumphant return this year to Korea for the World Championship so much sweeter for him. He’s come back to his roots while carrying the hopes of an entire nation. With just one more victory in the finale vs. Fnatic, Rookie could unleash the pent-up frustration of League’s biggest and most important region, one that’s never taken home the Summoner’s Cup.

So no pressure, Rookie. You got this.

Leaving Korea after the 2014 season was curious timing. To many serious fans of competitive League of Legends, that year was the height of Korean dominance. There was so much talent in the region that many organizations formed sister teams, two complete and separate star-studded rosters. At Worlds, Samsung teams White and Blue dominated, with the former taking home the title.

But they barely had time to celebrate before the entire landscape of the league changed. In the ensuing offseason, Riot outlawed sister teams, and all 10 members of the Samsung teams left for China. Somewhat lost amidst all that commotion was one of the first Koreans to make the jump over the Yellow Sea: the young mid laner for KT Rolster Arrows, Rookie.

Rookie wasn’t an unheralded player back then—his Arrows had won Champions Summer, after all. But because he missed Worlds, he didn’t have the name brand of Samsung stars. And he was so young, just 17 years old at the time.

A teenager blazing the trail for older champions famous all over the world? We should have known at the time that Invictus had something special when they signed Rookie in December 2014.

With Rookie and jungler Lee “KaKAO” Byung-kwon in the fold, IG’s goal was to make Worlds in 2015. They accomplished that mission by barely squeaking through the regional qualifier after a third place finish in the Summer Split playoffs.

But any hope that IG would be an instant success internationally faded just a couple minutes into the team’s first game. Facing off against Fnatic, who had just gone undefeated in the EU LCS Summer Split, IG showed little understanding of Fnatic’s early lane swap, giving up pressure in the side lanes and dropping turret after turret.

IG crashed out of Worlds that year with a 2-4 record, good for last place. The next two years would be a grind: IG consistently made playoffs but never won anything, narrowly missing out on Worlds last year after losing to Team WE in the regional qualifier.

But those were important years for Rookie. Unlike many Korean pros who venture overseas, Rookie fully absorbed the language, turning into a fluent Mandarin speaker. He built a personal following through streaming and letting fans see his personality. It’s no mistake that he’s become one of the most popular players in the LPL despite not playing on traditional powerhouses RNG and EDG. And it’s not an accident that of all the Korean pros that went overseas after 2014, he’s pretty much the only one still with his team.

When they look at Rookie, Chinese fans no longer see a foreigner brought in to win a title. They see one of their own, a player with whom they share years of Worlds disappointment. And that makes this weekend’s revenge series vs. Fnatic that much more important.

All that grind finally paid off this year as IG dominated both Spring and Summer splits in the LPL. They stumbled a bit in the playoffs, losing to RNG twice, including a series where they lost starting top laner Kang “TheShy” Seung-lok to an injury. But at full strength, they’re extremely dangerous. IG have built their whole team aroud Rookie’s ability to control mid lane and win any skirmish in his domain. Even without vision coverage, they all pile on Rookie’s back and fight to the finish.

That led to two-straight MVP awards for Rookie and status as one of the best in the World. So far with his performance at Worlds, he’s dropped the “one of” part of that title. Rookie is, hands-down the best mid laner alive. He’s most likely the best player, period. The only team standing in his way is an old nemesis: Fnatic.

The pressure on both teams on Saturday will be intense. Both represent regions desperate to win. But of all 12 players that could be fielded on stage, the most pressure falls on Rookie. He’s his team’s best player, the one person they’ve been able to rely on all year. He’s playing in front of his old country while representing his new home. The European audience is fantastic, but hundreds of millions of Chinese will tune in to see if Rookie can carry them to their first world championship.

It’s in spots like this, where everything is on the line, that unforgettable moments are created. Rookie’s already a superstar. Win on Saturday, and he’ll be a legend that never dies.