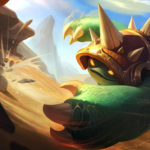 Viego, the Ruined King, first appeared in a trailer for a turn-based RPG game featuring the same name as him. The game will be published by Riot Games in 2021, but Viego made his debut earlier than expected for League of Legends fans.

Having hit Summoner’s Rift on Jan. 21, Viego became a solid choice for jungle mains. Though the champion can also be seen in the top and mid lanes, the win rates speak for themselves, with Viego having double the win rate when he contributes to his team from the jungle.

Viego’s kit allows him to clear jungle camps quickly, and he has a decent ganking tool in his W, which works like Vi’s charge. When a champion that can farm quickly in the jungle is also able to lockdown lanes without any trouble, you may need to form a game plan to slow down their overall effectiveness around the map. While you’ll be able to do just that by watching your positioning against certain champions, like Evelynn, others can force you to consider counter-picking just to increase your odds of winning.

Despite how powerful Viego can be, he struggles against his counters like other champions. Once you pick one of these champions, you should focus on decreasing Viego’s impact around the map to give your team some breathing room. Other champions on your team should be able to farm safer, and they’ll also be able to deal with Viego by themselves if they itemize correctly.

Here are the best champions that counter Viego in League of Legends.

One of the best ways of dealing with Viego is beating him at his own game. Rammus is an aggressive ganker that starts raining terror on side lanes sooner than Viego. As you start ganking other lanes with Rammus, you’ll automatically kick off a timer that’ll be ticking against Viego.

Viego’s teammates will start pressuring him to help since they’ll desperately need it, and it’ll naturally slow down his farm. Note that ganking lanes you’ve already successfully visited with Rammus will be quite hard for Viego when your teammates are also ahead in terms of farm.

Tanky junglers look like Viego’s kryptonite for now. The ones that can also farm fast in the jungle, like Poppy, will be quite hard to take down for Viego unless he gets some additional help from his teammates.

Poppy gets to harness more out of her teammates due to her overall tankiness. If Poppy and Viego were to meet while ganking the same lane, Poppy’s lane partner would be able to dish out a lot more damage on paper.

Even if she isn’t jungling, Poppy can be quite the lane bully since her passive allows her to turn up the heat and take trades. Mostly in the top lane, if Poppy’s opponent is in bad shape, Viego won’t have that many chances to gank Poppy’s lane, and he’ll need to look for opportunities elsewhere.

If you see Viego close to your lane, make sure to warn your closest teammate so they won’t be the next on the Ruined King’s agenda.

Another jungler that can go toe-to-toe against Viego is Evelynn. Not only can Evelynn farm the jungle as fast as him due to her sustainability tools, but she can also outperform him when it comes to helping other lanes.

Evelynn’s camouflage allows her to gank lanes from unimaginable angles, meaning no one will be safe if Evelynn sees an opening. Similar to Rammus’ case, actively roaming around the map will pressure Viego to do the same, and it may backfire on him if he doesn’t have enough farm. In any case where Viego also leaves empty-handed from his gank attempts, he’ll fall behind in farm and experience.

Based on jungle-clear speeds, Ekko may fall behind Viego. But Ekko starts showing his difference throughout the mid game where he’ll be jumping in and out of the fights. If you pick Ekko into a team that lacks ability power, his effectiveness will increase further and it’ll be tough for Viego to get a hold of Ekko toward the late game.

Ekko can also lane in the mid lane and his hectic nature makes him a pretty tough target for Viego, especially after level six. Ekko will be able to disperse most of Viego’s gank attempts if he has wards placed, and he’ll also be able to put some pressure on the enemy turret with his ultimate at his disposal.

Ekko can burst Viego through the later stages of the game, and he’ll also have a chance to follow a more tanky route. This flexibility makes Ekko an excellent pick against Viego since he’ll be able to adjust depending on how the match is going.

Keeping up with Viego when it comes to farming and overall map effectiveness will be your gateway to beating him. Gragas is a tanky champion with self-healing tools that allow him to clear the jungle quickly.

While Gragas is considerably slower than Viego, his Body Slam is still an excellent tool to start ganks. Gragas can also close the gap with his enemies with his slowing abilities, but it’s his ultimate that makes him a more of a threat than Viego through the late game.

If you compliment Gragas with champions that can utilize his ultimate ability, like Orianna and Garen, it’ll be extremely hard to match your side’s teamfight strength.

Similar to how Evelynn out maneuvers Viego around the map, Shaco can also do the same with additional perks. Alongside being a formidable ganker, Shaco also excels at taking down map objectives like Drakes by himself.

Even in cases where Viego happens to be more active than you around the map, you can still keep your team in the game by stacking up dragon buffs and capturing Rift Herald. Targeting the squishy champions and leaving the enemy team at a numbers’ disadvantage will be key throughout the game, but try not to overextend since getting caught off position may force your team to take a four-vs-five fight.

Vi and Viego are probably a lot similar than they’d like to admit. Their early game routines resemble each other, but Vi can end up being much more impactful.

Compared to Viego, Vi brings more lockdown tools to the table, and if she’s paired with the right champions, she’ll be a more valuable asset to her team. Though it’s possible for Vi to take over a game by herself, the chances are she may fail to outscale Viego with her team lagging behind in terms of farm.

Assuring your team’s safety and continuation of their farm should be one of your primary targets as Vi so you can rely on them later.

Heading toward the late game, you’ll need a reliable lockdown tool to make sure Viego doesn’t get out of control. Sejuani is one of the more consistent junglers in the game, and she easily matches Viego’s speed during the early game.

Even in a scenario where both champions are performing pretty similarly, Sejuani will have more utility tools to offer. If you have a lineup that doesn’t have any damage problems, Sejuani will be a better fit than Viego.

You can either try to snipe Viego with your ultimate or simply bully him out of teamfights with your tankiness. Viego will need to spend a lot of resources to get past Sejuani, and he can easily get punished during the process.

Though picking one of the champions on this list will increase your chances of winning against Viego, you can achieve the same results with your existing champion pool. Against junglers like Viego, who can close the gap with a champion while ganking, you need to be aware of your surroundings. Make sure to have wards up around your lane and pay close attention to your teammates. If you see Viego anywhere far on the map, use the opportunity to play more aggressively in the lane.

Pressuring your enemy when Viego can help them will keep their HP low and they’ll be too weak to help Viego if he ever decides to gank your lane.