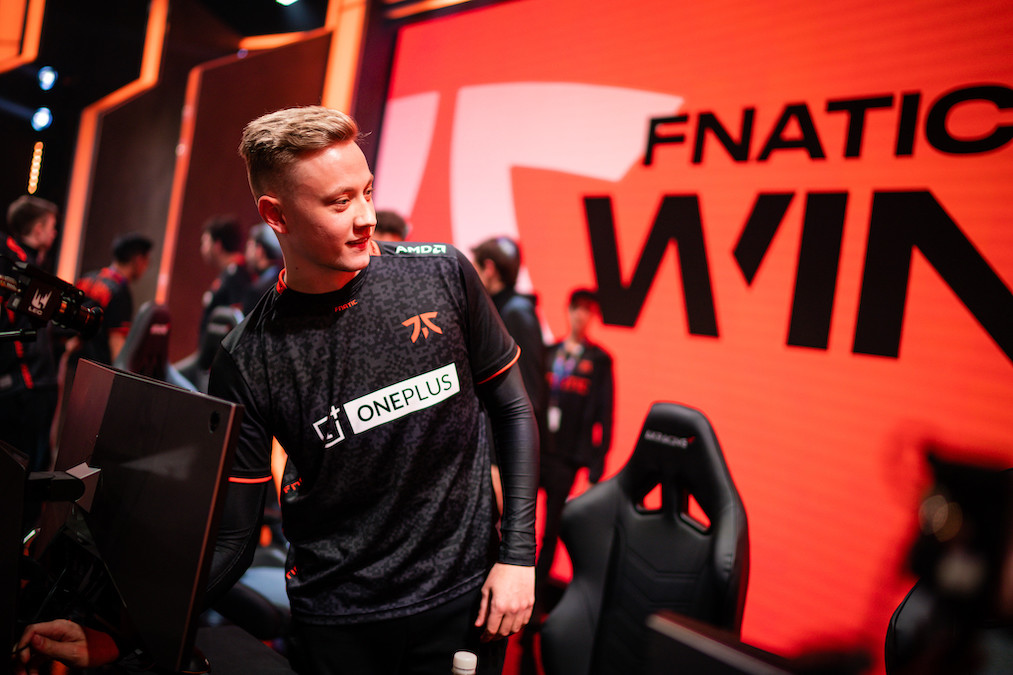 Star ADC Rekkles left Fnatic earlier in the week to join G2 Esports after serving as the organization’s franchise player for nearly 600 games. Though Rekkles is one of the most talented bot laners the European League of Legends scene has ever produced, it’s his never-ending desire to be the best that sets him apart from other players.

Starting from 2015, there hasn’t been a single season that wasn’t won by either Fnatic or G2. The two teams pushed each other to be better each split, and both squads looked forward to tearing the other apart before moving onto global tournaments to represent Europe to the best of their abilities.

Rekkles stayed with Fnatic almost from the beginning. A 16-year-old Rekkles found himself at the doors of Fnatic and only left the team once until his recent departure.

The Swedish ADC had a lot to consider during the split, but he ultimately followed his ever-burning desire of winning. He could sign for an LCS team to earn more money or stick with Fnatic to give it yet another go. A move to G2 certainly looked like it would give him the best chances to keep his promise of winning Worlds someday, though.

Although it may be difficult for fans of Fnatic to watch Rekkles play in another jersey, there’s no denying the ADC has plenty of moments from his time with the organization worth looking back on.

Here are all the plays that allowed Rekkles to carve his name onto the list of the greatest players that League fans got to watch during his time with Fnatic.

Even with two open lanes, sieging the enemy base can become quite trickier than it looks. One misstep at the front of your enemy’s base can cost a team multiple objectives around the map, allowing a comeback to happen.

During the third week of the 2019 LEC Spring Split, Fnatic were up against Rogue. Despite the close scores, the game was looking pretty much over for Rogue. Not all hope was lost, however, and the team still had one last chance to initiate the perfect fight.

Rogue had all the tools and the positioning advantages at its disposal with Alistar closing in from the backside of Fnatic and Aatrox in a favorable position to stun at least three Fnatic champions. Considering Rogue had Yasuo in their lineup, they only needed a single knock-up on Rekkles, who was the heaviest hitter on the Fnatic side.

Though the initiation looked like it was going well at first, Rekkles seemed to glance into the future and dodged all the spells that would have turned him into a sitting duck for Yasuo.

Dodging all these skill shots to get away would be one thing, but Rekkles made sure to hit Rogue back with everything he had to secure himself a pentakill in the process.

Taking down Baron Nashor is one way to assert your dominance over the enemy team. While you’ll always want to secure a couple of kills beforehand to make sure you don’t get contested in the Nashor pit, you may not get the chance to do that when you’re playing against one of the best teams in the world.

During the second game of the 2019 LEC Summer Split playoffs between G2 and Fnatic, Rekkles and his teammates were after the Baron buff. Though Fnatic were close to taking it down, G2 made it just in time to contest it. But Rekkles was having none of that with his perfect positioning.

Away from all the dangers that the G2 squad possessed, Rekkles started raining down skill-shots with Ezreal and even secured a kill on G2 Caps’ Akali after a bold teleport play.

Baron Nashor was long forgotten by both teams when Rekkles chased down every member of G2 with his team to wipe them and win the game.

Fnatic went on to lose the series after G2 pulled a reverse sweep, but it was still one of the better performances that both Rekkles and the Fnatic squad put out during 2019.

Each level you’ll gain on a champion will open the doors for a kill opportunity. You’ll have access to a one stronger spell than your opponent. This advantage grows massively when a champion advances to level six from five, which unlocks their ultimate spell.

While a young Rekkles was just debuting for the Fnatic squad in 2014 against Gambit during the first week of the Spring Split, things looked like they were taking a turn for the worse. Rekkles’ Jinx and YellowStar’s Annie were both level six, while Gambit’s ADC was just level five, and the two were ready to burst them down before Gambit’s jungler Shyvana made it to the scene.

The level advantage suddenly meant nothing since it was now a three-vs-two situation. Just when Rekkles had one hit of HP left, he cast his ultimate to score a double kill on Gambit’s ADC-support duo, Lucian and Thresh, which also granted him movement speed to outrun Shyvana.

Though Diamondprox’s Shyvana tried his best to catch Rekkles’ Jinx, there was no stopping Rekkles.

Kite it till you make it—Fnatic vs. G2: LEC Summer Playoffs 2019

A Baron Nashor attempt almost never goes well if you’re surrounded by the enemy team. Tunnel visioning them won’t be an option since they’ll be coming from multiple different angles, and you’ll get cornered into the Baron pit.

This was certainly the case when Fnatic were playing against G2 during the second round of the 2019 LEC Summer Playoffs. Fnatic committed to taking down Baron Nashor even though it looked like a slightly risky play, and G2 closed in like a wolf hunting down its prey.

G2 were successful in making Fnatic let go of Baron and were even challenging them to secure a couple of kills, which looked quite likely. G2 kept on advancing, and Rekkles continued to kite them with his Xayah. Rekkles took down three of G2’s champions with Xayah’s feathers and single-handedly prevented G2 from taking down any objectives after scoring four kills on Fnatic.

Chasing down after kills is one of the most natural instincts you’ll have in a League match. You can always run in a straight line while doing so, but taking advantage of your surroundings will always give you better odds of securing kills. Knowing your champion will also be a vital factor in the process since each match depends on your tools.

During the ninth week of the 2017 LEC Summer Split, Fnatic were up against Team ROCCAT. Rocking one of his signature champions, Tristana, Rekkles looked like he felt the game from the beginning. Fnatic had to overcome a score disadvantage until this decisive Baron fight, but it never felt like they were out of control.

Despite closing down on Fnatic in a well-organized manner, ROC were quickly dismantled by Rekkles’ on-point marksman plays, and they found themselves retreating to fight another day. Rekkles was slightly far away from the rest of the ROC squad, which was making it more difficult for him to land the killing blows.

He suddenly started jumping over wall after wall to land shots that’d allow his team to take out a total of four enemy heroes. Rekkles showed how advanced he is when it comes to micro-plays; if he were to get hit by one or two more skill-shots, he’d simply die, and his team would never be able to come out of the skirmish in the same way.