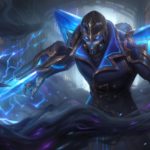 Halloween is headed to the Rift. The spooky holiday is just around the corner and Riot Games is celebrating the season with a new batch of League of Legends skins.

The developer showed off PBE previews of new Tales from the Rift skins for Amumu, Elise, and Fizz today, as well as a new Hextech skin for Kassadin. Each of the holiday skins redesigns the champions into Halloween-themed creatures.

Bewitching Elise dresses the jungler as a witch with an army of pumpkin spiderlings trailing her. Pumpkin Prince Amumu reimagines the Sad Mummy as a sad pumpkin that summons a whirlwind of bats for his ultimate. Little Devil Fizz carries a golden trident and boasts a set of devil horns, throwing out a crown for his ultimate, which attracts a giant Little Devil Teemo in place of his usual shark.

Kassadin is also set to receive a new Hextech skin. In his new look, he wears a long navy blue robe and sports two crystal-like shoulder pads. Fans of the Void Walker will be able to craft his regal look by combining 10 gemstones in the client’s Hextech Crafting tab.

The new Tales from the Rift skins aren’t the only ones the League developer showed off today. Riot also previewed new Odyssey skins for Kha’Zix, Aatrox, Sivir, Twisted Fate, and Karma, which will arrive on the game’s PBE alongside the Halloween-themed skins and Hextech Kassadin in the upcoming patch cycle.