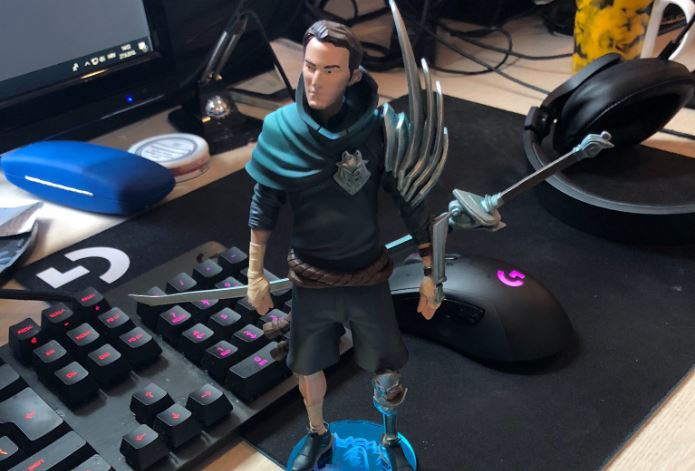 Only a day after the Rise music video was released by Riot, Luka “Perkz” Perković received a figurine from Riot of his appearance in the video.

Perkz’s appearance in the video was nothing short of epic, dressing him up in a G2 Esports-themed Yasuo costume as he slashed, dashed, and danced with Kang “Ambition” Chan-yong across a field of tall grass. Sure, he lost, and Ambition moved on to fight his next opponent, but Perkz still looked cool, right?

So far, no other players from the video, including Lee “Faker” Sang-hyeok, Ambition, or Jian “Uzi” Zi-Hao, have said that they’ve received figurines as well. We certainly hope they do, though, because, and no offense to Perkz, their roles in the video were all a little more impressive.

While this is awesome, we imagine some players from Worlds 2017 who made more of an impact than Uzi or Perkz might feel a little slighted. Either way, though, having an actual figure of yourself from this video is a touching tribute.

Hopefully, Riot continues this tradition by including obvious references to players in anthem music videos, because it’s really, really cool.

Update Sept. 27 at 8pm CT: Riot Games released a video on Twitter showing that Uzi, Faker, and Ambition each received figurines of themselves, too.