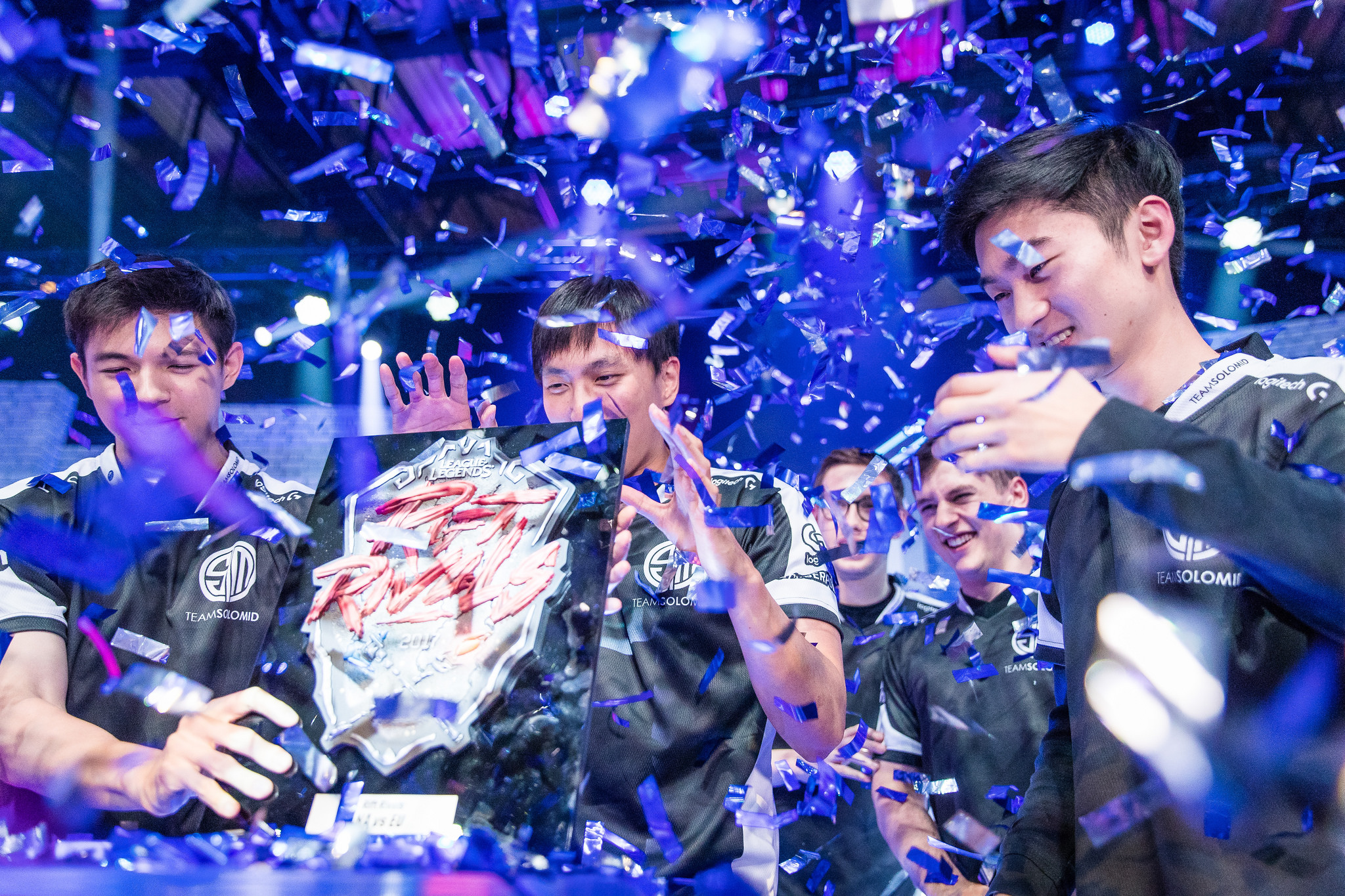 One of our teams finally won an international tournament again. It was especially sweet to see TSM lift the trophy after they were the source of so much disappointment in recent years. It doesn’t matter that Rift Rivals only included NA and EU in this iteration. Few expected North America to do well, but instead, they dominated. By the end of the week, there was no question that NA is better than EU right now.

The three NA representatives, TSM, Cloud9, and Phoenix1, play vastly different styles, but took advantage of some common strategies that worked wonders against their European counterparts. Both TSM and P1 would have been favorites in the final against Unicorns of Love, and even Cloud9 would have given them a fight despite a bad group stage record against UOL.

The fact that the eighth-place NA team would be favored in a hypothetical matchup with the best European squad is a huge surprise. And it all starts with the player of the tournament, Phoenix1’s rookie jungler Mike Yeung.

Total control over the jungle

Before looking at NA’s big advantage in the lanes, it’s helpful to see what happened in the jungle. All three NA junglers dominated. Cloud9’s Juan “Contractz” Garcia continued to show why he’s the best jungler in NA. TSM’s Dennis “Svenskeren” Johnsen, who has struggled heavily at international events, showed up, including on Kha’Zix, a champion he’s been inconsistent on.

Then there’s Mike Yeung. Holy hell. The rookie is only halfway through his first split, but he’s already the heavy favorite for rookie of the split. And at Rift Rivals, he won the Riot analysts’ award for MVP of the group stage.

By playing balls-to-the-wall. Mike Yeung ruthlessly invaded the EU jungle, setting up deep vision and helping his lanes succeed. But he also just took camps for himself, focused on getting himself ahead.

Fnatic and Unicorns of Love have dominated their region in jungle CS, with Fnatic’s Broxah in particular having a huge advantage. Broxah continued to do well for himself at Rift Rivals, again far outclassing the field in CS at 10 minutes. It’s what happened after that point that told the story.

After the lane phase, European junglers are typically called all around the map to support their team’s lane swap shenanigans. EU teams have been on top of lane swap theory for years, and with the return of Rift Herald to the top side, those have increased. While NA teams have picked up their fair share of Rift Heralds, they’re also comfortable with standard lanes and establishing control over dragons. Doing so allows their junglers to farm both sides of the river.

Mike Yeung is the shining example for NA junglers putting on the carry pants after farming greedily. He showed proficiency on meta champions, but his performance on his pocket Nidalee really shined. UOL made the crucial error to give him that champion in their second match—it had been 100 percent banned against him until that point—and paid dearly.

UOL chose to lane swap, and Phoenix1 did nothing. They let Noh “Arrow” Dong-hyeon and Mike Yeung to keep farming. UOL accrued a hefty kill lead, but it all fell apart once P1 started to press their vision advantage in the jungle.

After this point, Nidalee ran away with the game.

That play from Phoenix1 also highlighted another North American strength: mid lane priority. We wrote about this when examining NA’s surprisingly good start to the tournament, and it held true through to the finals—NA played mid lane better.

UOL mid Fabian “Exileh” Schubert redeemed himself somewhat with good teamfighting, but was an abomination in lane. G2 mid laner Luka “Perkz” Perkovic had the best tournament of the three, but G2 lost nearly every other part of the map.

Finally, Fnatic’s Rasmus “Caps” Winther had a dismal tournament for someone with so much potential. TSM mid laner Soren “Bjergsen” Bjerg mentioned as much in his interview following the last group stage game against G2. “Caps has been heavily underperforming this tournament,” Bjergsen said. “I had pretty high expectations for him, but I think he did not perform well at all.”

The fact that all three NA mids in the tournament once represented Europe had to hurt EU fans. Each of them dominated lane and had great influence in fights. Even C9, who typically struggle to get Nicolaj Jensen involved, figured out that they can simply bring the rest of the team to him.

All three NA teams boldly grouped mid in response to side lane pressure, often diving into turrets. This didn’t always work, but it did catch their opponents off guard. Even in the final, UOL looked surprised by how decisively TSM would dive. Mid lane priority gives teams options for which side to play around, and can also solve awkward assignment decisions for where to put the mid and ADC.

UOL’s fate was sealed in the third game of the final when they just couldn’t find inroads to punish Bjergsen for taking Kassadin, a scaling pick, into LeBlanc, an early-game snowball champion. Jensen won a game against then-first place Immortals in the NA LCS by punishing this particular matchup.

It was almost comical how much attention TSM had on mid lane to keep Bjergsen safe. Not only was Svenskeren constantly there, but so was support Vincent “Biofrost” Wang.

Look at the TSM vision on the bot side river. Biofrost constantly showed mid, abandoning ADC Yiliang “Doublelift” Peng on a low-mobility ADC in Ashe, all to help Bjergsen. It got to the point that all Biofrost needed to do was disappear into fog to impact two lanes. UOL got off to a hot start with an early game team composition and still lost because of how fed Bjergsen got.

This is not a strategy without counterplay. Over time, Europe should develop an antidote, namely comps that aren’t so heavily devoted to splitpushing with side lane pressure. But this isn’t a small fix. The players have to improve and the teams may have to rethink their macro strategies. It will be interesting to see if EU figure this out before Worlds, especially as the meta shifts.

Drafting and the meta

Another theme of the week was how well the NA teams were drafting in the meta. Numerous casters and analysts praised all three teams for their drafts. In what way were they ahead of the Europeans?

For one, NA did better on playmaking supports. Thresh and Rakan are at the top of draft lists worldwide, while Western teams have a fondness for Blitzcrank as well. Their counters are now almost exclusively Tahm Kench and Braum.

The most disappointing EU support was G2’s Alfonso “Mithy” Rodriguez. He had a good Blitzcrank game, but G2 has relied so much on his playmaking, especially with Trick in a slump since MSI. But the duo lane just couldn’t find an impact in the games.

The North Americans also drafted more cohesive comps overall, while EU oscillated between comfort champs and counter picks. Counter picking and flex champions are powerful tools, but only when crafted into a strategy that the team can execute. We saw how this could work when UOL beat TSM in the group stage—Gnar and Vlad are both comfort picks that synergized well with UOL’s aggressive teamfight strategy. Sadly, we didn’t see that cohesive of a draft from UOL in the final.

Drafts are a hard thing to analyze because we never see 99 percent of the strategy that goes into them on stage. We don’t know what these teams are practicing, which comps they’ve ruled out, or why they think certain ones are good. And many coaches will tell you that draft analysis is overrated—it’s much more instructive to see what the players do with the champions, no matter which ones they are.

But for now, the draft seems like the starting point to fixing EU’s problems.

Rift Rivals is a new format and it looks like it will take the place of IEM as the third-tier international tournament behind Worlds and MSI. In a recent interview with theScore, CLG’s Zaqueri “Aphromoo” Black indicated that he didn’t think too highly of the tournament and that he was glad to be resting back home.

Whether that sentiment is genuine is questionable since CLG wasn’t participating. But we’ve seen NA teams purposefully skip IEM before, which raises the question: is Rift Rivals an accurate barometer of the two regions’ strengths, and does it matter in the long run?

The answer is yes.

Part of it is how thoroughly NA dominated this year’s tournament. They are clearly outclassing the Europeans in several fundamental categories. With G2, in particular, in a slide since MSI, EU needs to take this as a serious wakeup call if they want to do well at Worlds later this year.

In a sport where these types of tournaments are rare, we should seriously consider the results, even if there was only one best-of series. Yes, the sample size in NA vs. EU is small, but with Rift Rivals, it’s bigger. We can’t ask for more opportunities to judge regions against each other if we don’t take advantage of what we have.

We don’t know how predictive these results are. But we do know that NA is better than some thought going into the week. We know that Mike Yeung is a beast and that Phoenix1 isn’t dead. We saw some crazy tower dives and fantastic League of Legends. Rift Rivals isn’t supposed to be as serious as Worlds, but it still was a smashing success.

And so were the teams from North America.

All player and team stats from Oracle’s Elixir, champion data from Games of Legends.