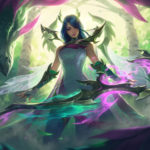 Dragons are taking over League of Legends in this patch cycle. As part of the game’s new Dragonmancer skin line, Riot Games is releasing six new skins in Patch 10.20.

Ashe, Aurelion Sol, Brand, Lee Sin, and Sett are all receiving new skins with the upcoming update. Fans will be able to purchase the skins when they arrive in the client’s store later in the week.

Of the bunch, Lee Sin’s Storm Dragon skin stands out as a legendary cosmetic item. The skin comes with a new voice over and will be priced accordingly at 1,820 RP. Similarly, Sett is receiving this patch cycle’s Prestige skin, which redesigns the juggernaut’s dragon-themed look in a new golden coloration. Fans of the top laner will be able to craft the skin with 2,000 event tokens.

The remaining skins—Storm Dragon Aurelion Sol, Eternal Dragon Brand, Obsidian Dragon Sett, and Fae Dragon Ashe—will sell for 1,350 RP. Each of the skins will release in the store alongside a set of eight unique chromas for additional purchase. Storm Dragon Lee Sin will also have a set of six chromas that fans can pick up to further customize the jungler’s look.

Patch 10.20 is scheduled to arrive on the live servers tomorrow morning. The patch’s batch of cosmetic items will become available on Oct. 1.