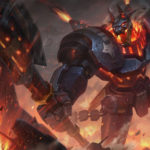 Five new additions to the Battlecast and Resistance skin lines will release in the 10.23 patch cycle. Victorious Lucian will also launch in this patch cycle for League of Legends players who reached Gold or higher in the game’s ranked mode during season 10, which just ended.

Nasus and Zac are joining the Battlecast skin line, while Jayce, Singed, and Yorick will take up the opposition as part of the Resistance. This is the first time Zac and Singed have received skins since 2017 when Riot Games released SKT T1 Zac and Beekeeper Singed.

Those who reached Gold or above in League’s ranked mode before season 10 ended will automatically receive Lucian’s new gem-encrusted Victorious look. Qualified players who haven’t unlocked the champion will also have him added to their account for free.

Related: A number of League champs join the space fight with new Cosmic skins, including Skarner, Hecarim, Varus, and Nidalee

There are six additional chromas for Lucian, which will be handed out based on rank. Those who reached Platinum will receive a Platinum-themed chroma, and each subsequent rank will receive an associated chroma. The Battlecast and Resistance skins will also release alongside their own set of chromas, which will be available in the client store for additional purchase.

League fans can purchase the Battlecast and Resistance skins when they hit the client’s store on Nov. 12. Victorious Lucian will be distributed to qualified players by Dec. 10.