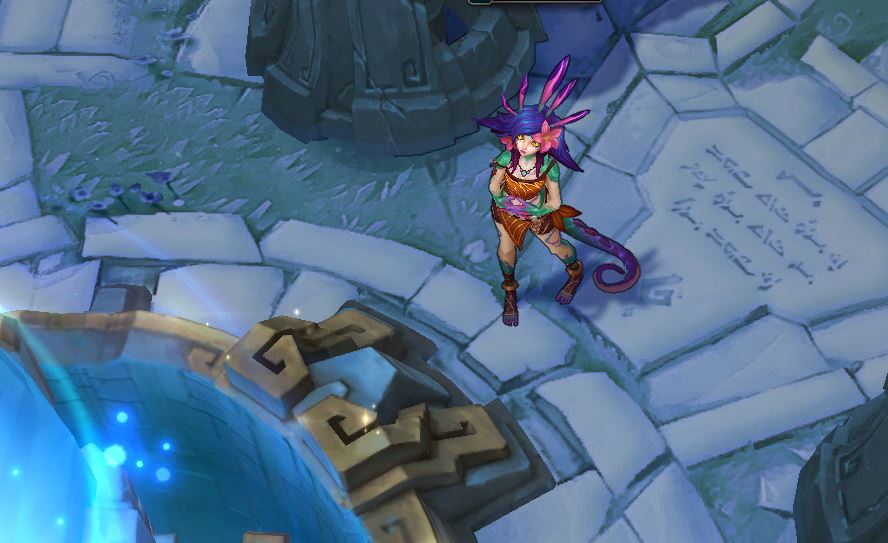 Patch 8.24 should arrive this week in League of Legends, which means Neeko, the queer chameleon set to join the game’s lineup of champions, should also be coming this week.

To prepare ourselves for the inevitable horde of solo queue players either instantly locking or instantly banning the poor child, we’ve loaded her up in the PBE a few times. Our findings, after running numbers in Practice Tool and actually playing normal games on Summoner’s Rift, is that she might be a bit overpowered. And when we say a bit, we actually mean a lot. She’s, uh, very strong.

First, we’ll take a look at the numbers, because, as they say, the numbers don’t lie. For items, we built a Luden’s Echo, a Lich Bane, Nashor’s Tooth, Zhonya’s Hourglass, and finally a Rabadon’s Deathcap. For boots, we chose the Sorceror’s Boots, because why not. With this build, we found the AP high enough to get proper scaling from her abilities while the Lich Bane and Nashor’s Tooth combo worked with her three-hit passive very well. It deals a lot of damage, so it felt appropriate to utilize it at least that much.

Why this combo? By using the E first, you root the enemy in place and trigger Lich Bane for the next basic attack. Then, you launch another basic attack to set up your three-hit passive. This part alone deals roughly 700 damage. After this, the big burst happens.

By launching your Q, you deal about 586 upfront and 500 more with the following bounces, you pop Lich Bane again on the next basic attack at the same time as your three-hit passive. Finally, you launch the ultimate ability, cashing in at around 1,500 damage with that alone and a total burst of just a hair under 3,000. If you keep firing basic attacks during your ultimate’s channel, which you can do, you can pop your passive one more time, stacking the total burst up to 3,500 with Nashor’s and Lich Bane. Obviously, that’s a lot of damage. If resistances weren’t a thing, it would even be enough to burst down a tank or bruiser. With resistance, it could still wipe out about half their health bar at end-game.

Now let’s talk about why this will likely irritate real life players instead of just training dummies. It essentially comes down to the fact that Neeko is extremely accessible. Her abilities are shockingly easy to lane, but they’re also very hard to dodge. Why? Her Q just has to hit an enemy champion to trigger the bounces, it flies over minions, it’s very long range, its projectile speed is fast, and it’s an area-of-effect attack to boot.

Her W is great for survivability and trickery, but requires much less talent and skill to utilize properly like LeBlanc or Shaco. Her E is a snare that goes through a few enemies, dealing damage to each, and that can be extended if it hits enough people. Her ultimate is the kicker. She just hits the button and runs into a team, dealing a massive burst of 1,500 damage, gaining a big, fat shield, and all in a very large explosion radius. If not interrupted, it will be very difficult to get out of the circle.

On top of all that, you don’t actually really need to land the proper combo to deal all that damage. Barring stacking Lich Bane procs consistently, you could literally just toss all her abilities in any random order, and as long as you keep basic attacking after they’re all thrown out, you’ll still deal comparable damage.

Easy accessibility and high power is a solo queue player’s worst nightmare. Not only do we think she’ll cause a bit of an uproar upon release, but we also imagine balance changes are in her immediate future—possibly even before her release. That’s just an assumption, however, it’s hard to predict any sort of balance change in League.

If Riot follows the typical patch cycle, this explosive chameleon will arrive on Wednesday,