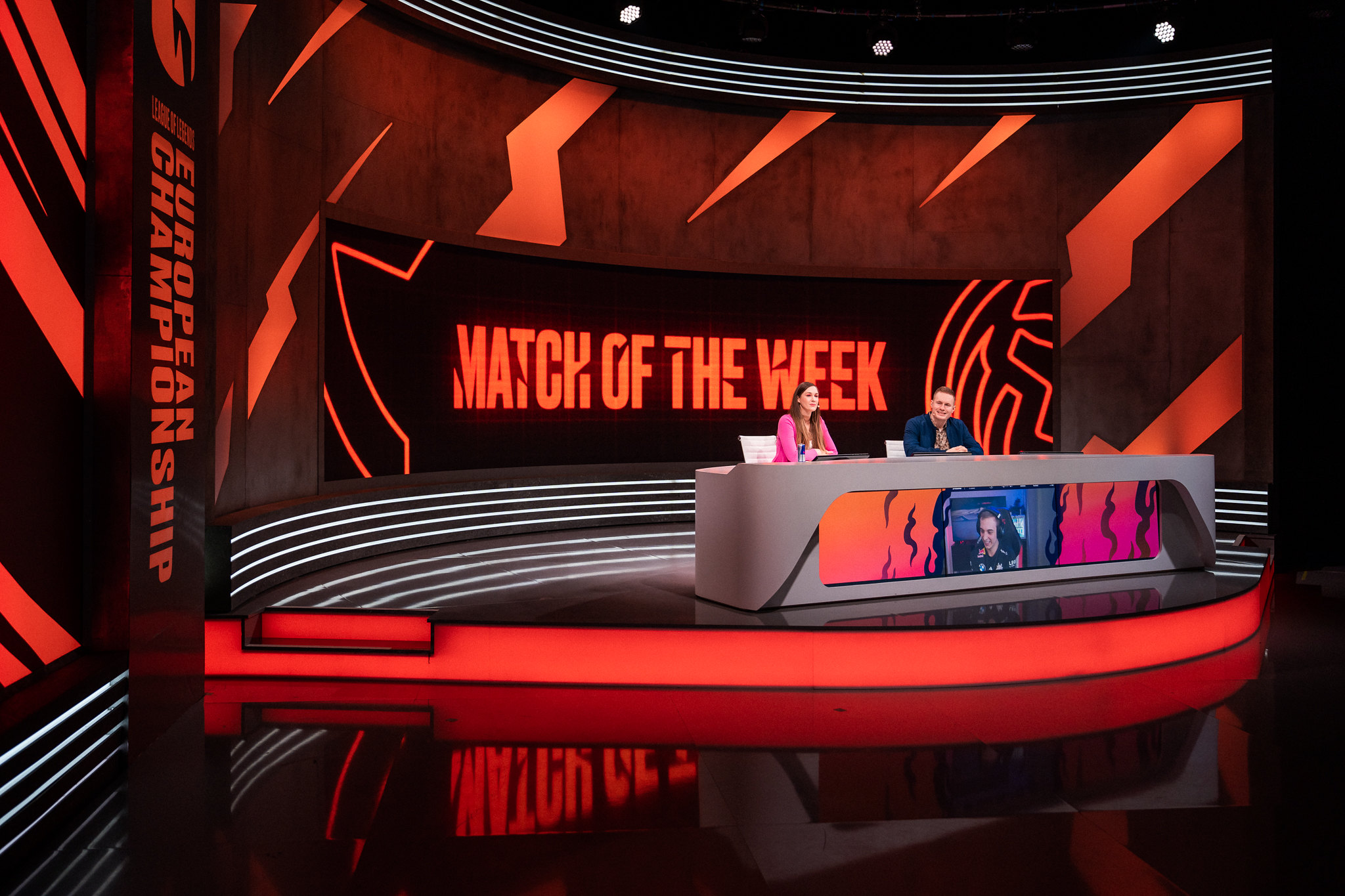 We’re almost at the finish line for the 2022 LEC Spring Split, with one week remaining in the regular season. And yet the race for the final few playoff spots is still hanging in the balance between a handful of League of Legends teams.

Team Vitality created some space for themselves in the postseason hunt by winning two important matches against SK Gaming and Misfits, while Fnatic continued to gun for Rogue’s first-place spot with their third win in a row. Lastly, Vetheo remained steadfast in his bid for an All-Pro First Team nomination with some impressive play through a 1-1 weekend.

Before the start of 2022, many people heralded Vitality as the final boss of the LEC. With a collection of superstars in almost every role, this new roster was supposed to top the league right from the get-go. But if you watched the first half of the Spring Split, you might’ve mistaken this team to be a middling organization trying to sneak into the playoffs.

In week seven, however, the team finally came to life against SK and a rising Misfits squad in what was their best performance yet. One player in particular who needs to be praised is their star top laner Alphari, who absolutely destroyed the competition from the early game onward. He only died one time this weekend and grabbed nine kills and seven assists on Gangplank and Gnar.

Alphari is known as the most dominant laning player in Europe, with the LEC’s highest average gold difference at 15 minutes, according to Oracle’s Elixir. But instead of fumbling those leads with unusual mid-to-late game decision-making, he and the rest of Vitality translated that early advantage into an even greater push to victory. From great teamfighting to good macro, Alphari and the rest of Vitality could become a problem if they can stay consistent with this level of play from start to finish.

Razork is in top form this split, much like his whole team. Since the beginning of the season, he’s sharpened his skills as a jungler, reaching first place in KDA statistics among all LEC junglers, according to the League stats website Game of Legends. Last week, one could say that Razork shined as bright as the moonlight with his 4/0/10 performance on Diana against Rogue.

But when playing with and against great players like Upset, Larssen, Humanoid, and Comp, it’s easy to fade into the background of the feats accomplished by other carries. Razork has made himself as much of a star player as anyone, though, thanks to his combinations that have been destructive to his opponents. In the recent match against the season’s front-runners, Razork played aggressively but also in a rational way, consistently attacking the enemy backline and claiming several dragons by himself for his team. From the first few minutes, Razork moved in search of plays and aggressions even beyond his half of the map, which helped his team gain necessary advantages for a victory against the best team of the season.

Still second in the standings, Fnatic and Razork will have to prove they can keep hold of their position when they face Misfits, who are quickly climbing the standings thanks to Shlatan and Vetheo, in the last super week of the regular season. Razork’s team also has a chance to overtake Rogue for first in the standings. But to do so, they need Rogue to make a mistake and lose at least one game and Fnatic need to close out the week with a 3-0 record.

Vetheo has emerged as a top three, potentially even top two, mid laner this split on the back of nothing more than a series of strong performances stringed together. When the season started, Vetheo was merely listening in on the conversations surrounding the best mid laner in Europe. Seven weeks into the Spring Split, he’s dominating those conversations.

Vetheo leads all LEC mid laners in KDA this spring (7.3), kill participation (77 percent), and ranks second in damage per minute (542), according to League stats site Games of Legends. This weekend, Vetheo came up enormous in a must-win game against Misfits’ closest competitor in the Spring Split playoff race, G2 Esports. In that game, Vetheo had the performance of a lifetime on Akali, posting a final scoreline of 16/2/4. Although Misfits went on to lose their second game last weekend against Vitality, that performance was enough to earn him TOTW honors in our book.

Fnatic are now at the top of the mountain after defeating two heavyweights in Rogue and MAD Lions. They played with great synergy and incredible match awareness. Achieving these victories should’ve boosted their morale, moving closer to the playoffs.

One of the primary reasons for this squad’s monumental success is Upset’s potency and efficiency in their matches. After joining the team in 2020, he has successfully filled the enormous void left by Rekkles and emerged as one of the best AD carry players in the LEC. In week seven, he wreaked havoc in teamfights with his Aphelios and Jinx picks and gathered seven kills, 14 assists, and, on top of that, remained deathless in both the matches. That’s not surprising at all considering the fact that he boasts the highest KDA (17.6) in the 2022 LEC Spring Split. Moreover, he also has one of the highest average gold, experience, and creep scores, according to the League stats site Games of Legends. These stats show his dominance in the early game and how influential his presence is for his team.

It’s hard to believe that Hylissang, who’s had an illustrious seven-year career, is still leveling up his game. Coming into 2022, the biggest knock on Fnatic’s most-tenured veteran was his excessive aggression and high death totals. In the last three splits, Hylissang has led the league in total deaths, nearly eclipsing the century-mark last spring with 99 deaths in a single split. Since the start of the 2020 Summer Split, Hylissang has died 294 times in regular-season games, according to League stats site Oracle’s Elixir. With just 39 deaths through Fnatic’s first 15 games of 2022, however, he is on pace to have his most effective split in recent memory.

But even though Hylissang has seemingly shed the most noticeable Achilles’ heel of his playstyle, his trademark aggression and willingness to hit the “go” button is still just as present in Fnatic’s winning formula. With 11 of his 15 games this season being played on engage supports such as Rakan, Pyke, Thresh, and others, Hylissang is essentially Fnatic’s trigger finger—just as he has been for the last two seasons. When he goes in, the rest of the team is likely to cascade behind him. Only this year, he’s found a way to walk away without a scratch on him more often than not.