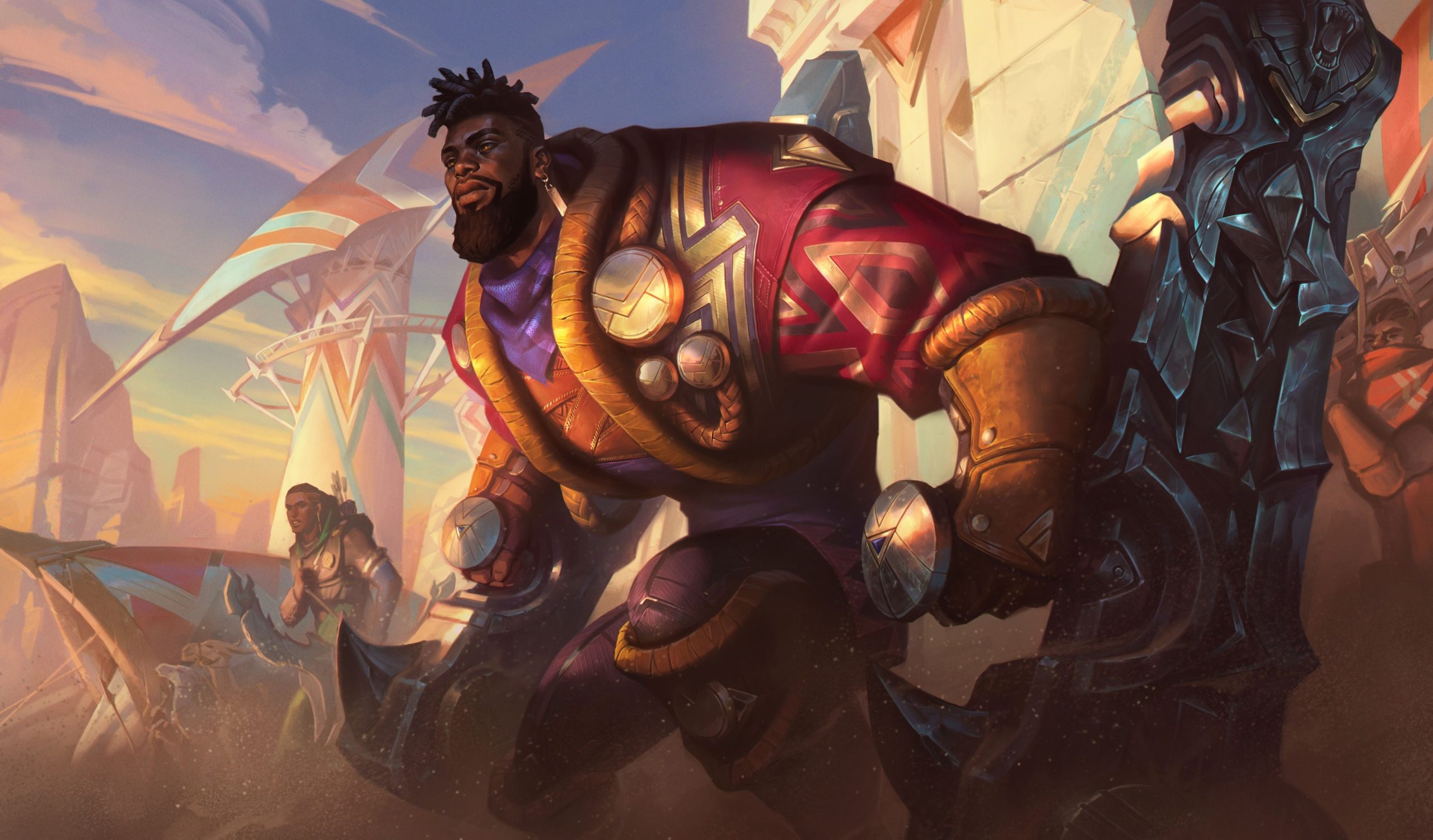 For League of Legends (and really, Riot Games as a whole), diversity and inclusion have been propelled to the forefront over the last few years. Riot’s push to represent more cultures and peoples in its games has been amplified with its two premier titles, League and VALORANT, at the forefront.

League’s next champion, K’Sante, who releases later this year, will push Riot’s diversity initiatives into new territory. Beyond being a headstrong skirmisher in the top lane on the gameplay side of things, K’Sante’s lore, story, and background all continue the company’s mission to diversify the characters in its games.

A majority of the recent champion releases dating back to 2020 have represented and been inspired by real-world marginalized groups. K’Sante marks new territory for the game’s roster of 160-plus champions as its first Black and openly gay addition.

“[Diversity and inclusion] is something that, specifically for League champions, we’ve come a long way but still have farther and farther to go,” Michael Luo, narrative designer at Riot, said in a recent developer roundtable event. “In no way does one character make up for years of D&I work that we still have left to do.”

In 2020, Riot strongly increased its company-wide effort to boost its authority in the D&I sphere, with strides being made in multiple games to represent different cultures, countries, backgrounds, and orientations.

In VALORANT, seemingly every new agent that joins the roster represents a new country, and only two of the characters in the game hail from a repeat nation (Viper and Brimstone, United States).

And although it’s easier to represent real subsets of people when the setting of a game is literally planet Earth, challenges begin to arise when designers of a game like League are forced to work around the rules of cultural inspiration and draw their work from real life while placing it into a fantasy scope.

“Being able to reach people and achieve a specific level of representation that’s going to speak to certain people and allow people to be seen in the content that we’re making… it’s really exciting, energizing, and wonderful to feel empowered, to tell those stories, and to allow ourselves to weave those stories into the overarching fabric of League of Legends,” said Thomas Randby, skin designer on the K’Sante team.

For K’Sante, those real-world inspirations are drawn directly from Africa, in a similar fashion to many other artistic undertakings set in the Runeterran nation of Shurima. While Shurima as a whole takes on countless points of inspiration from North Africa, Egypt, and occasional sub-Saharan cultures, K’Sante’s home city of Nazumah (which is located in the greater nation of Shurima) is directly inspired by West African culture, according to Riot.

Throughout the development process for K’Sante (and specifically, his story), Luo and the rest of the narrative team spoke to other Riot employees internally who had “lived experiences of being queer and Black.” According to Luo, a central theme of “pride in all senses of the word” popped up around every corner, and it wasn’t until then that K’Sante’s story “revealed itself.”

Whether it was in the form of being proud of your homeland, heritage, orientation, skin color, or heroic deeds, K’Sante became a beacon of what pride means in the world of Runeterra—and how it connects to pride in the modern world.

“I was super grateful to speak and learn from people with those lived experiences and try my best to be a student and incorporate as much of that authentic representation as we could,” Luo said. “For K’Sante, I want to think we did our best due diligence in incorporating the details and nuances of that identity.”

Riot also made it a point of priority to showcase how pride can turn to arrogance and stubbornness, adding complexities to a character who struggles with his own internal demons.

“He is always straddling this line of wanting to be proud of everything he is and everything he can do,” Luo said. “At the same time, that does become a hurdle to cross, and in his deeper backstory, it becomes a reason for some of his mistakes and fallings-out with those he loves the most.”

Where diversity in League goes from here

With an increased focus on making the League roster represent more people, Riot is doing everything in its power to not only make up for lost years but set a standard for future releases. With K’Sante, the company also teamed up with Grammy award-winning artist Lil Nas X, a Black and queer rapper, to create a prestige version of the champion’s launch skin.

“We are always considering diversity and inclusion in all aspects of creative content that we put forward, be it in a champion, a story, or even re-examining past champions and looking at it from all perspectives in any new characters we develop going forward,” Luo said.

With K’Sante, it’s clear that diversity was a major pinpoint of the champion’s development cycle, which lasted over a year, according to Riot. All four of League’s humanoid champions released in 2020 have had black or tan skin, showcasing the company’s effort to have more groups feel represented by the characters they see or play in-game.

Traditionally, the League preseason is a time in which more champions are released at a frequent rate. With the 2023 preseason set to begin sometime within the next two months, players should keep an eye on new potential champion releases and the potential diversity initiatives they could encapsulate.

“One champion can’t represent everyone, but we hope [K’Sante] is a worthy effort to push Riot forward in terms of diversity and inclusion in League of Legends,” Luo said.

K’Sante will go live in League later this year.