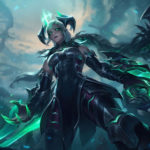 Get your wallets ready, League of Legends fans. A total of eight new skins are arriving on the live servers this week with the release of Patch 11.2.

To mark his arrival on Summoner’s Rift, League’s newest champion Viego is recruiting a few familiar faces for his army. Draven, Karma, and Shyvana are joining the Ruined King’s ranks with shadowy, green-accented skins in this patch cycle. Fans can pick up the three Ruined skins from the game’s client shop for 1,350 RP each.

In addition to the Ruined skins, Cho’Gath, Jhin, Neeko, and Nautilus are all stepping up this week as the lucky recipients of the newest skin line: Shan Hai Scrolls, a new Chinese-inspired theme with fiery, cloud-like elements. Each of the four Shan Hai Scrolls skins will also sell for 1,350 RP.

Viego’s release skin, named Lunar Beast, is set to drop this week following the champion’s arrival on the Rift. Riot Games revealed a number of additional Lunar New Year skins today that will join Lunar Beast Viego on the Rift in the next patch to celebrate the holiday.

Patch 11.2’s batch of skins will arrive in-store on Jan. 21 and will release alongside a set of chromas for additional purchase.