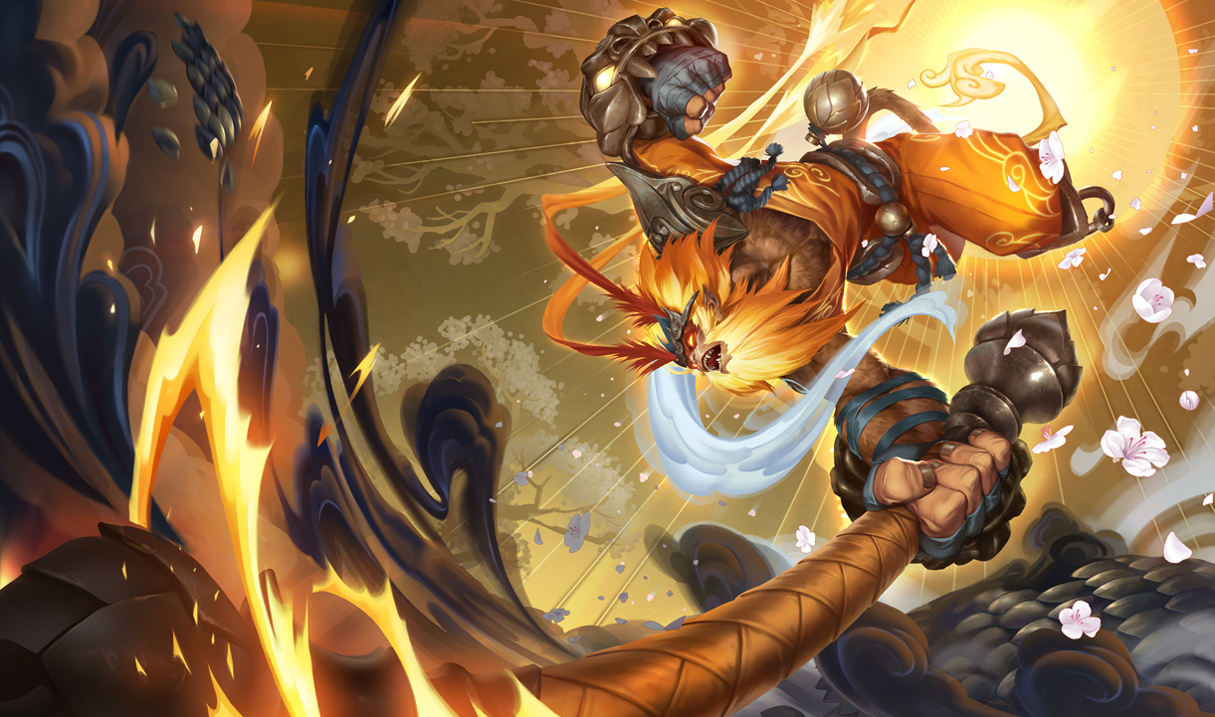 Wukong’s rework that was shipped to the League of Legends live servers recently looks great so far. In fact, it looks so good that the Monkey King is close to being overpowered.

Wukong fell out of favor due to the number of bad matchups he has and a loss of agency during the later stages of the game. He was most viable with a lethality, assassin type build, which not many people enjoy playing. His only goal was to get a good flank on a carry and try to blow them up since he couldn’t deal with any of the frontline champions.

While the current top lane tier list doesn’t feature Wukong as a high free Elo pick, this might change soon once we gather more data from the live servers.

Why Wukong required a rework

Wukong’s most popular build path was an assassin one where you went in, tried to get a kill, and then died. His kit left no room for error, so if you went for a bruiser type build, your damage wouldn’t be that high. The assassin path was the only way. This created a non-interactive gameplay style with Wukong trying to pick up some farm in the top lane then roaming around for kills and abandoning his lane due to a plethora of bad matchups.

His abilities also felt outdated when compared to Sett and Ornn. His old kit didn’t synergize well with the assassin role in which he found some comfort.

As a result, summoners turned toward more interactive champions that wouldn’t become useless if they lost their lane, which was the case for most Wukong games. He was just not a good laner anymore after all the reworks and updates for other champions.

Wukong’s updated kit looks amazing. It feels much smoother to play and has more decision-making incorporated into it.

His old passive, Stone Skin, granted armor and magic resist for every nearby champion. That was reworked to grant armor and health regeneration, which is stackable if you damage enemy champions. While it did lose the MR bonus, the new passive feels like a better fit for the bruiser type champion Wukong is being shaped into—a champ who wants to have extended fights and manipulate enemies with his clone.

His Q, Crushing Blow, received a nice buff, allowing you to decrease its cooldown if you or your clone damage an enemy. The price paid for this buff was reduced attack range from 125 to 75 at level one of Q, but this evens out once you’ve ranked it up to level three.

His W, Warrior Trickster, received an amazing rework. Instead of having a useless decoy spawn at the place you use W, Wukong now has a decoy that will interact with your abilities and actually does damage. The price of this was reduced invisibility from 1.5 seconds to one second, but this is a fair nerf considering the damage potential there is now in Wukong’s kit.

Wukong’s E, Nimbus Strike, was nerfed to compensate for other buffs to his kit. Instead of scaling with bonus AD, it will now scale with AP. Riot did provide some compensation for this by increasing the attack speed gained and the attack speed buff duration.

His R, Cyclone, is now a terror to deal with. Both Wukong and his clone from W can use this ability, allowing you to knock-up targets far from each other and deal a lot of damage to them at the same time without being even close. The other significant buff lets Wukong cast it a second time, allowing you to do your combo, ult, then do your combo again and ult again. This is extremely deadly against any carry who might be able to escape your first ultimate.

Is the new Wukong overpowered?

While it’s still too early to tell, the initial data gathered over the past couple of days shows that Wukong is outperforming most top laners in the game, even those who were considered counters to him.

He’s hovering at a 53-percent win rate and a six-percent pick rate right now. This will likely increase soon as more people meet him and start picking him up after seeing how strong he is. The small pick rate percentage is also affected by his ban rate, which is around 30 percent.

Just to get a brief idea of how strong Wukong is, take a look for yourself at the clip below in high Elo on the NA server:

With just a Tiamat and Doran’s Blade, Wukong was able to kill Darius from 100 percent health without many issues at level six. That’d be unheard of if we were talking about the previous iteration of Wukong.

Related: Was the Akali rework a failure?

His current updated kit mimics other reworks from Riot, which put too many resources at his disposal.

Wukong is being tested in all roles except ADC. He has the highest win rate and pick rate as a top laner for now, but multiple summoners are finding success in the jungle and mid lane as well. While Wukong support doesn’t seem to fit the role, he’s being played there as well right now.

While the old Wukong would focus mostly on assassin type builds, the new Wukong seems to be more successful with CDR oriented, bruiser builds with Conqueror as the primary keystone. Old players seem to be focused on Electrocute, which was the primary keystone in the past. But this might be dragging his win rate down for now.

The new Wukong has the core kit as the old Wukong but received great quality of life buffs, such as a useful passive alongside an interactive clone who deals a lot of damage and can mimic Wukong’s abilities. While summoners are still experimenting with builds and roles, the most successful combination based on initial data seems to be in the top lane with Conqueror as the primary keystone and a bruiser build to complement it.

Expect to see Wukong’s play rate skyrocket in the next couple of days as more summoners pick him up after seeing how strong he became.