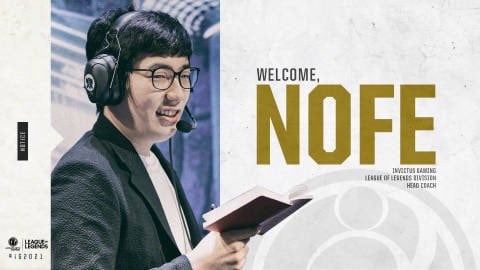 Invictus Gaming is acquiring Korean coach NoFe as the head coach of their LPL team for the 2021 Summer Split.

Having coached in both the LCK and the LPL, NoFe joins the team after a brief stint as an analyst for the Korean broadcast of the LCK. The LPL organizaton announced the move via Weibo today.

He began his career as a jungler in 2012, and transitioned to a coaching role in 2014. Since becoming a coach, he has attended four World Championships, including one Worlds final with the KOO Tigers in 2015, and a semifinal with ROX Tigers in 2016. In both the LPL and the LCK, he has won five regional titles, including a victory at the KeSPA cup in 2016 with the ROX Tigers. Most recently, he was head coach for Hanhwa Life Esports in the LCK.

The signing comes after IG underperformed in the LPL Spring, losing to Rare Atom in the first round of the Spring Playoffs. The roster currently contains four World Champions in TheShy, Ning, Rookie, and Baolan, and despite winning multiple LPL titles since their Worlds victory, they have been unable to replicate their international success. They came close in 2019, but lost to eventual champions FunPlus Phoenix in the semifinals of the World Championship.

NoFe enters the roster with years of experience under his belt. Although he took a brief hiatus from the coaching role in order to participate in the LCK broadcast, he’s a highly decorated coach who IG are hoping will help secure them a spot at the 2021 World Championships.

The LPL Summer Split is set to kick off on Wednesday, June 9.