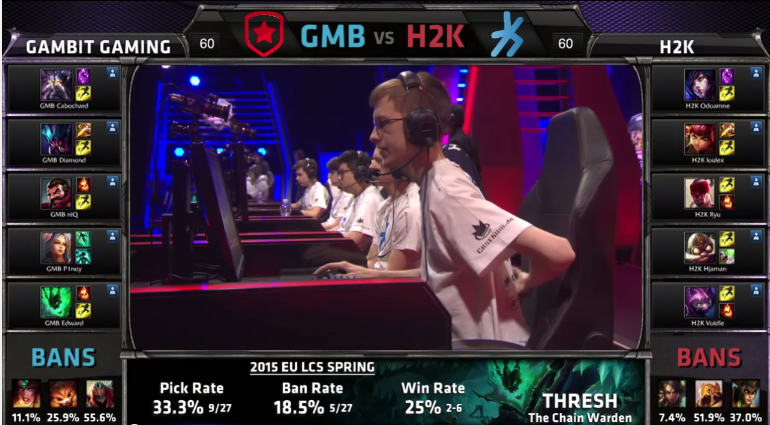 Gambit have started the season with a 1-5 record. This has been one of the worst starts that teams have had in the history of the EU LCS and the LCS in general. Gambit have been in a downward spiral after wining IEM Cologne showing promising performances at said tournament but then continue to lose all their games until the game versus H2K. A game they needed to win in order to gain confidence and possibly avoid relegation as at the moment they are prime candidates with MyM.

Gambit’s bans are focused on two power picks in the current meta which we really haven’t seen Gambit play them effectively and a targeted ban towards Ryu. While H2K prioritizes baning the Nidalee jungle which is one of the best junglers in the current patch having been played in solo queue by Diamond even before the buff to her jungle and denying two champions which Cabouchard plays but can be flex picks. In picks Gambit prioritized the Kassadin as their first pick which can be played both mid and top. But also mainly it is a comfort pick for niQ who hasn’t been preforming lately on the other champions. H2K prioritize an engaging support in Annie and one of the best all round picks at the current 5.2 patch Ahri who has a decent matchup versus Kassadin. This allows Gambit to get Pinoy his comfort champion Graves and Rek’Sai also a power pick in the current meta. Lee Sin gets locked in as Loulex’s most played champion and Corki which is decent versus Graves and a generally good pick. Irelia is a good laner versus almost any top laner and Thresh as a previous comfort pick for Edward. And H2K opts for a last pick Kennen.

Gambit goes for a pick comp while H2K go for a team-fighting comp which has engage and also a lot of peel for the backline. Gambit have a pretty good pick comp in order to win they need to maintain vision and get picks and proceed to kill the rest of H2K with Kassadin and Rek’Sai mobility. H2K’s comp is a good teamfighting comp but they have a lot of magic damage making them easier to itemize against. The win condition for H2K is not to get picked, to get flanks with the Kennen or Annie resulting in a wombo-combo or peeling for the backline after they engage because Kassadin, Irelia and Rek’Sai want to dive the backline.

The game starts with a lane swap that H2K opts for sending the support and ADC top while Loulex tries to get a greedy blue buff on the side of the map where they are outnumbered which gets interrupted by Edward thus rendering his early ganking pressure lowered which doesn’t help after Voidle takes his blue buff in a lane where there is no one to harass. The 4 man dive on Odoamne who decides to also stay greedily in the bot lane results in first blood. Which afterwards translates into the first tower and first drake, after first blood Gambit send their duo bot top lane because H2K’s botlane has been freezing the lane. Gambit overstep at killing Kennen in the bot lane and end up giving two kills to H2K. Gambit gain an early lead but fail to gain the appropriate vision as their vision is lackluster during the early game, they get a drake and then Diamond gets some deep wards in the bot jungle. They have good vision on the second drake spawn and sneak it but H2K’s lanes are wining in CS. Having a better late game comp have the edge but their vision continues to be poor for the pick comp they have.

Gambit try to get an advantage in the top lane after having cleared the top vision for H2K and to dive the Kennen which fails because Odoamne has a ward at the golems. While Ruy pushes up mid and Voidle decides to re-setup full vision on the top side instead of fully warding at the drake and get deeper wards. Then cause of the lack of vision on Gambit’s part the pick comp gets picked by Ryu’s burst and they kill Pinoy. H2K don’t get an objective after the kill even though the wave clear on Gambit is gone as nobody else can safely clear waves on Gambit’s side but they do set-up vision for drake and H2K gets it without contest after backing. After the drake Gambit decides to siege instead of getting vision for their pick comp and try to kill someone which is not what their comp is meant to do. While sieging they decide to fall back having no vision Odoamne tries to flank them only to get stunned by Irelia and bursted by Kass who both have hit their mid-game power spikes, they line up perfectly for a Graves ult and then Gambit get two kills which results in two towers falling on the side of H2K. Gambit have no vision in the Baron pit so H2K baits them into going in and then gets a kill on Pinoy but Gambit kills Hjarnnan in the pit making them unable to take the Baron. A brave Voidle dies without his team at drake giving Gambit the 3rd drake with having again no vision around it. Then his team mate Odoamne remains in the bot lane farming, knowing they are doing the drake and continues to give another kill to Gambit. Instead of gaining vision or placing deep wards Gambit decides to send Kass top and group mid. While Kass is pushing H2K gain coverage and Voidle tries to get a good position to flash stun but gets seen by the Kass coming from toplane getting picked once more and then the chase potential from Gambit is really strong. Which nets them a pretty much free Baron which gets traded for a bot lane second tier turret. Gambit have a great advantage cause of the missplays of Voidle and their team in general but neither team have played their comp accordingly as H2K lose the midgame despite having better vision control.

After securing Baron Gambit opt to secure the drake trying to set up vision around it but not getting deep wards in their jungle. H2K face checks and tries to go in without having proper vision and Voidle gets caught which results in a 4v5 fight because Corki is dead from getting bot turret, which Gambit win and they get another free drake. H2K in order to get back try to get a pick which they do with killing Edward while he sets up some vision but they get collapsed from multiple angles from the Gambit squad and get an inhibitor and another four kills. Gambit starts to set up some deep wards after this point having won almost all the teamfights. H2K is obviously tilting at this point because they forget to pop a Rek’Sai portal which enables Diamond to engage because they don’t need to get a pick at this time because they are so much more powerful than H2K. The solo laners play smartly and don’t wanna jump in the Kennen maelstrom and wait for it to pass while kiting a bit back but Corki remains untouched for the fight and chunks Diamond and Edward. Corki finishes up Edward and Diamond as he over-commits getting killed by Graves as they get a 3 for 3 while Gambit having Baron. At this fight we see how H2K could of won the teamfights if none of the members of the team got picked in the first place. But at that time it is too late but still get a comfortable trade. Pinoy after the fight remaining alive gets their fifth drake as they then move to Baron after respawns. Gambit try to setup vision and get a pick around the Baron as H2K is forced to facecheck and gets picked off which gets followed by Gambit spliting up and going one by one at Ahri and Corki getting all killed until they get so low and Pinoy comes to clean up Corki while Ahri escapes with little to now health. They have the fifth dragon buff but still fail to teamfight accordingly and lose 4 people because of that and getting a 4 for 4 trade while having gotten a pick which is totally incomprehensible at this level of play. They don’t show the proper team coordination and team-fighting prowess the old Gambit had, but this Gambit has only two members of the old which explains the lack of synergy. After the 4 for 4 trade they return to Baron with the fifth dragon stack gone on all of them. H2K tries to setup vision and search for a pick but Ahri gets bursted by the Kassadin and then gets killed which ends into them getting Baron the fifth dragon stack again and finishing this game.

Both teams this game played really poorly which shows why this is a fight for survival in the EU LCS. Gambit had poor vision throughout the whole game and failed to make their comp work but instead relied on H2K’s missplays and going in without vision to get the picks they needed in order to snowball and win teamfights. Their teamfighting and coordination were poor having lost fights with the fifth drake buff cause of spliting up and not pursuing the same targets. H2K’s comp had a lot of magic damage and relied on them not to get picked but walking blindly or getting caught out basically helps Gambit. Voidle got caught too many times which led to them getting uncontested Barons and drakes. The vision control was much better from H2K but their decision making when to go in and the positioning of mainly Voidle and at the last fight Ryu where he decided to split from the team cost them the game. H2K didn’t play to their teamcomp’s strengths.

Moving forward Gambit really needs to work on their vision control and learn how to make a pick comp work because an experienced team won’t give you the picks like H2K did. Their teamfighting and individual performance needs to improve in order for them to stay up in the league. Losing in almost all of your lanes can sometimes be detrimental. And also they need to play to the team comp’s strengths instead of going and sieging with a pick comp. Shotcalling also is key because not focusing the right players in teamfights showed in this game can be almost fatal.

H2K had better vision control throughout most of the game, they didn’t play out their comp correctly and got caught too often sometimes with vision and sometimes without. Communication needs to improve and they need to try to play to their strengths and force objectives to snowball their lead in lanes versus weaker opponents and try to gain an advantage with the vision control you possess.