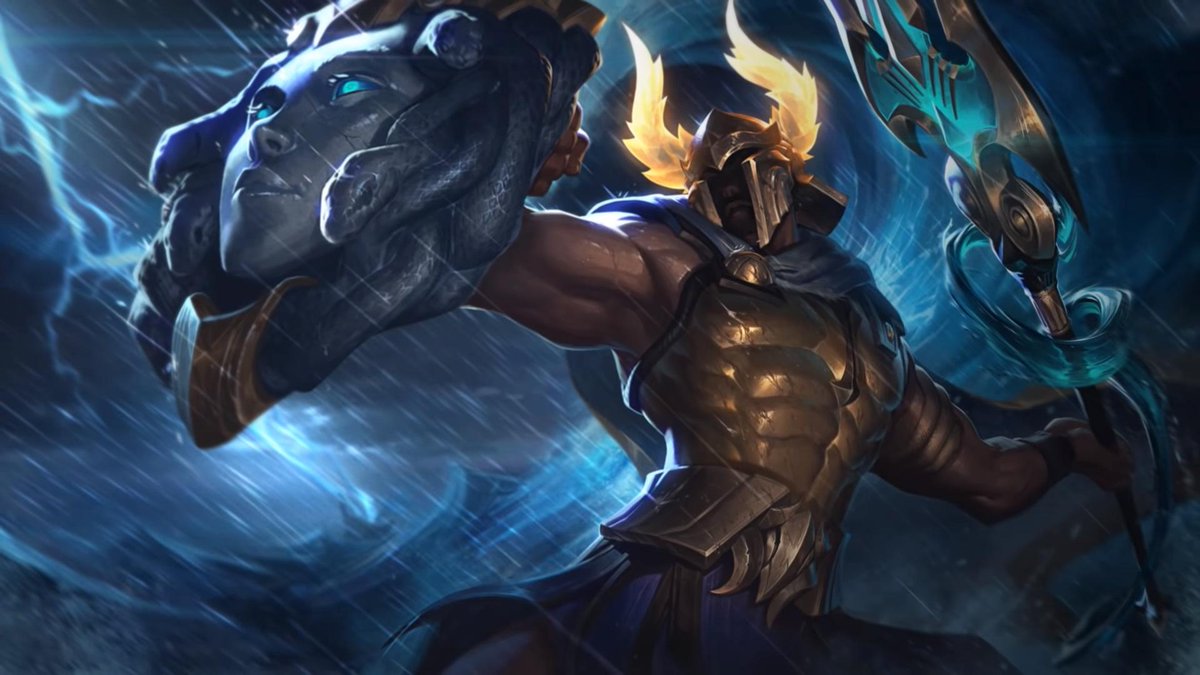 With the Pantheon rework shipping onto the League of Legends PBE soon, Riot Games gave fans their first look at the game’s newest demigod and revealed some information about his revamped kit.

Alongside a lore and visual overhaul, Pantheon has a new moniker, the Unbreakable Spear. The video also contained a bunch of new artwork for the Targonian warrior.

Based on portions of the video, Pantheon appears to have a five-part passive, like Annie and Jhin’s ammo system. When max stacks are reached (likely by attacking enemy champions and/or minions), all abilities change from a gold icon to a deep-red, indicating that some extra power is being given to those abilities. The stacks are consumed on the next ability cast and will have to be charged up again. There’s no word on what this ability will be called yet and whether the basic attack immunity from Aegis Protection will return, but the passive already seems quite strong.

Pantheon’s Q is Comet Spear and it works relatively similar to Pyke’s Q, Bone Skewer, without the pullback component. Pantheon throws a spear much like his previous Q, Spear Shot, except the main difference is that it’s now a skill shot as opposed to a point-and-click ability. This should help to reduce the linear nature of Pantheon’s gameplay and begin to inject some more skill expression into the champion. When passive-empowered, Comet Spear will most likely do extra damage (such as critical striking to be reminiscent of his old kit), but it could easily do something else.

The second and last of Pantheon’s abilities to remain unnamed, the Unbreakable Spear’s new W also looks quite similar in appearance to his old W, Aegis of Zeonia. But when landing after leaping to an enemy, he strikes them with his spear as well. When empowered, Pantheon’s W strikes three times after landing and also roots and stuns. The root duration lasts after the stun, so there will be a window where an enemy can’t do anything. But it also gives them an opportunity to fight back while Pantheon is laying into them.

Aegis Assault is Pantheon’s new E, and it appears to function quite similarly to his previous E, Heartseeker Strike. A fan of blades sprays out from Pantheon and deals damage, but similar to Ornn’s W, Bellows Breath, an extra explosion of damage comes out from Pantheon after the main ability finishes. The combo seems relatively straightforward and is extremely reminiscent of old Pantheon. He uses W to get into range and deal some damage, but also sets up his poor opponent for a new barrage of damage from the E.

For what quickly became a budget Galio ultimate, Grand Skyfall has received a stellar upgrade. Now called Grand Starfall, a Pantheon player designates an endpoint and the Unbreakable Spear now swoops in along the ground, damaging enemies on his way to that spot. As mentioned by gameplay designer Bryan “Axes” Salvatore, this should offer skilled Pantheon players a new way to show off their skill and be more effective in teamfights. It’s a much more flashy ability than what he previously had and it looks extremely fun to land as you fly in like a comet to lay waste to your enemies.