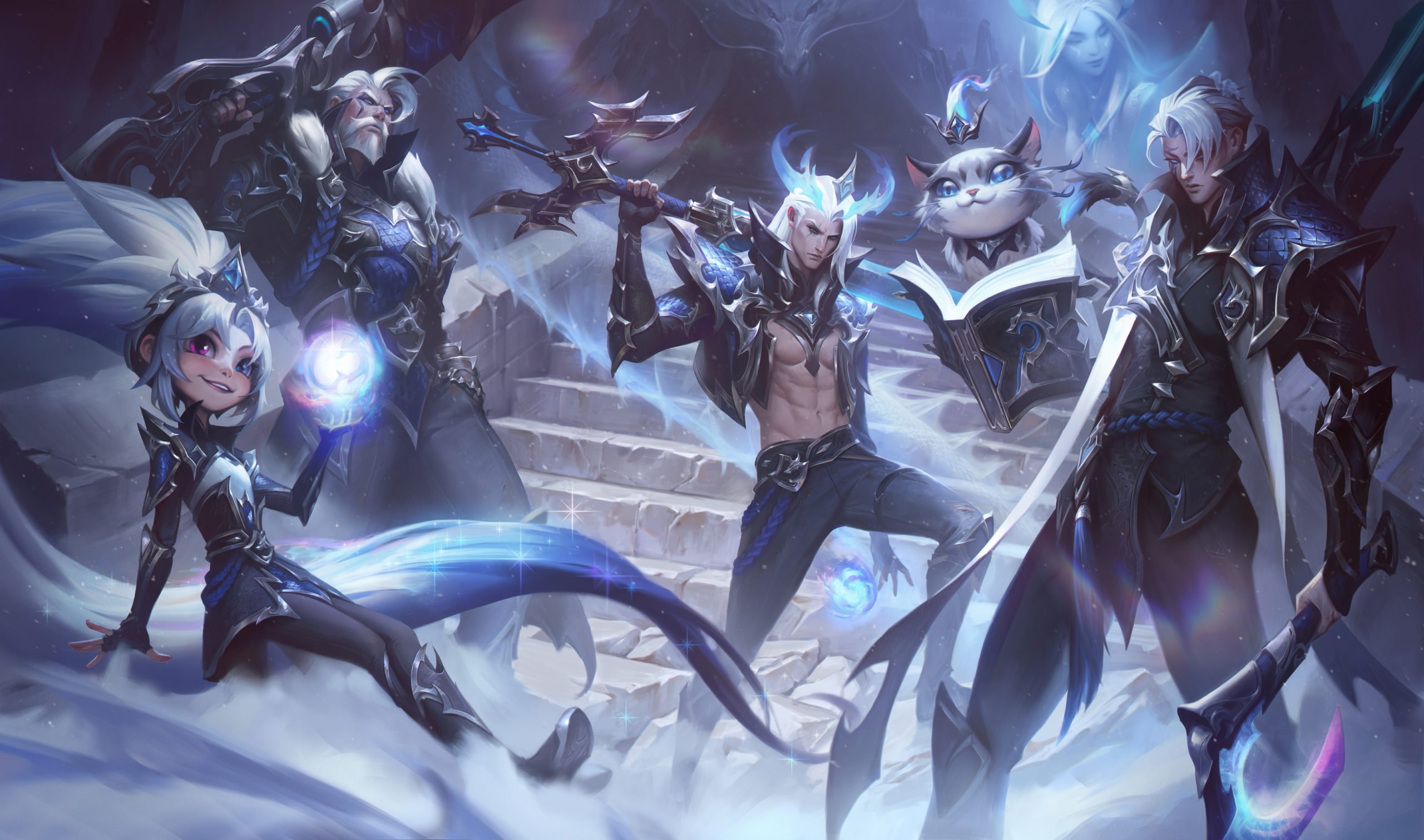 Rumors that the League of Legends World Championship skins for Edward Gaming were going to hit the Rift soon have been going around since a splash art was leaked last week. And now, Riot Games has shared an official preview of how the skins look in-game.

As it has done for every team that’s won Worlds, Riot has designed five skins with the help of the EDG players, who also put their signatures on their champion of choice’s animation recall.

The theme of the Worlds 2021 skin line seems to be tied to EDG’s dragon theme, as well as a dark starry night. With silver and blue adornments, each champion retains those features that make them unique while also having some shared characteristics that tie them under one sole skin line. Dragon scales, silver stars and sparkles all over, and the unmissable Summoner’s Cup are just a few of the traits shared by the five champions chosen for the EDG skin line.

The EDG silver dragon skins will also have a chroma edition in black and red, colors that represent the team’s 2021 Worlds jersey. Here’s a preview of the five EDG Worlds 2021 skins.

The Aspect of Twilight maintains her innate playful personality even in this celebratory skin. The starry night theme goes well with Zoe’s basic twilight theme, and the Aspect’s expressions during the recall are a reminder of how whimsical and fun the champ can be. The champion was chosen by Scout, who brought her to the Rift several times at Worlds 2021 and, keeping with tradition, put his signature in the animation of the champion’s recall.

Jiejie picked the Ruined King for his celebratory skin. The dragon scale armor and the darkness of the night envelop Viego in a royal suit that elevates his concept and cruel abilities to a more majestic form than ever before. His ultimate seems to emphasize those fallen under his blade by highlighting several weapons left on the field, including the Ruined King’s own sword. But the most spectacular element of this skin is the recall, which highlights the games won and lost by EDG in the finals against DWG KIA.

White hair and a gun covered in dragon scales, that’s Flandre’s Graves. The Outlaw of the top lane has many traits in common with the other EDG skins, including a surprising sword in his W ability, End of the Line, and what seems to be five swords planted in the terrain during his Smoke Screen (E) ability. In the animation recall, Graves opens a briefcase and, before raising the World Cup, he pulls out Lucian’s guns just to throw them away.

For his 2021 Worlds skin, Meiko picked Yuumi and used his own cat as inspiration. The Magical Cat lands on the Rift with a small crown over her head but no dragon scales to cover her fur. While using her ultimate ability, Final Chapter, Yuumi channels seven waves of damage that mark her opponents with a dragon-like emblem. While doing so, a star can be seen traveling from Yuumi’s book to the end of the ability, traveling across five points before the Summoner’s Cup appears. Those stops represent the five times Meiko took part in a League World Championship, with the last trip being the victorious one, according to a post on Weibo. During the animation recall, Yuumi is initially seen playing with a fish within the Summoner’s Cup, but then a caring hand picks her up, places her within the trophy, and caresses her kindly while Meiko’s signature appears underneath.

Viper chose Aphelios for the celebratory skin line—well, Aphelios and Alune. The Weapon of the Faithful and his sister perfectly fit the skin line’s themes of the dragon and the night. Every single weapon of Aphelios’ and their animations have a dragon or its scale on them, from Calibrum’s mark to Gravitum’s double dragons and Inferum’s ultimate that shows a dragon spiraling around Alune’s appearance. Every detail on this skin is perfectly crafted to give the siblings a stance worthy of the title of world champions.

Although the skins have been hinted at for some time, it’s still unclear when Riot will release them in the client. But considering the release of in-game footage, they could hit the Rift as early as the patch before the start of MSI.