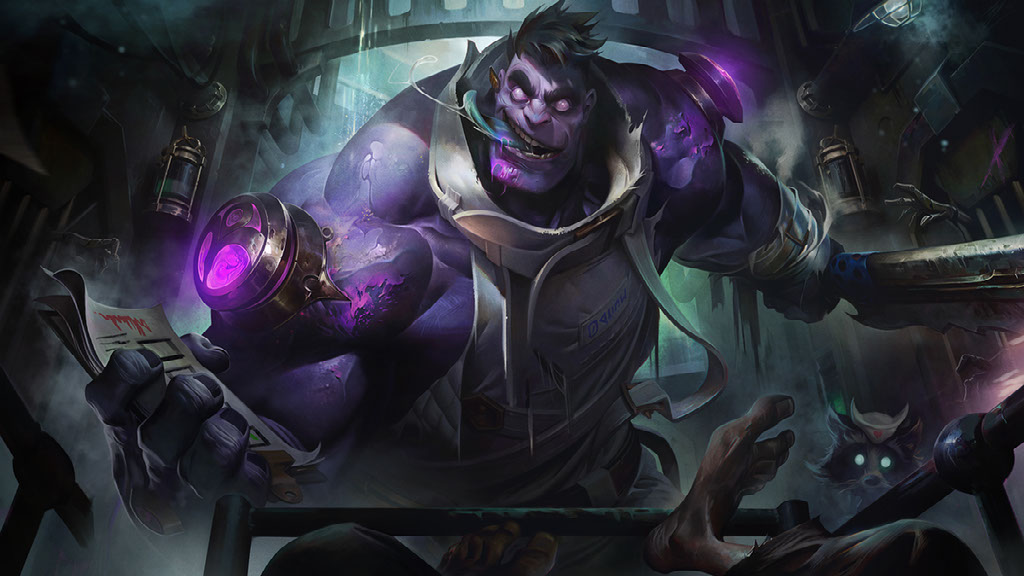 Dr. Mundo is set to receive a full-fledged visual and gameplay update in League of Legends Patch 11.12, which is slated to release on June 9.

The champ is getting a new character model, animations, visuals, and special effects to make him look better and to better fit in with how League’s visual style has evolved over the years. Coupled with an improved kit—maintaining his super-tank regen and iconic cleavers—the new Mundo is making his way to Summoner’s Rift in the next few weeks.

But with a new look and feel comes new champion lore, facts, and more. Riot describes Mundo as “utterly mad, tragically homicidal, and horrifyingly purple,” and what keeps the citizens of Zaun—a large, undercity district, lying in the deep canyons and valleys threading Piltover—indoors on “particularly dark nights.”

Now a “self-proclaimed” physician, Mundo was once a patient of Zaun’s most “infamous asylum.” But after “curing” the entire staff—whatever that means—he “established his practice” in the empty wards that once treated him. Beaten, battered, and bruised, Mundo began mimicking the “highly unethical procedures” he had so often experienced himself.

Related: Dr. Mundo’s legacy skins will be temporarily available for purchase in League’s Patches 11.12 and 11.13

With a full cabinet of medicines and “zero medical knowledge,” Mundo makes himself more “monstrous” with each injection and terrifies the “hapless patients” who wander near his office.

A strange case of Dr. Jekyll and Mr. Hyde leaps out with the new rework. But despite his horrifying lore, Riot is keen on keeping Mundo a “fun and comical champion” according to a Dev Blog in February.

“One of our early challenges for Mundo was landing on the right tone for his doctor theme—is he a brilliant doctor who went mad, or a ‘brilliant doctor’ who is mad?” Riot said. After feedback from the dev’s initial post last year, Riot decided to take the “dark comedy” theme with the champion.

He has a similar kit to his old self, making him “extremely difficult” to lock down. But he’s also straightforward and will remain a champion without too much mobility or hard crowd control.

The devs briefly tried giving Mundo some form of hard crowd control but never seriously considered it. “It felt right that Mundo had no hard CC, and he could have to rely on other things to consistently hit cleavers and stay in melee range,” Riot said in an email with Dot Esports.

The champion will also be viable in the jungle, according to Riot. The main differences between the original and reworked Mundo come in the form of his passive and W ability. “Mundo’s passive can negate entire ultimates under some circumstances and his W lets him access incredible levels of sustain when he commits to an engage,” Riot said. “Oh, and he should definitely still be viable in the jungle.”

Mundo’s full list of new abilities can be found here.

Mundo’s update marks the 24th rework in League history, not including the many dozens of secondary visual updates added to the game over the last 11 years. He was one of the 40 original champions released in 2009.