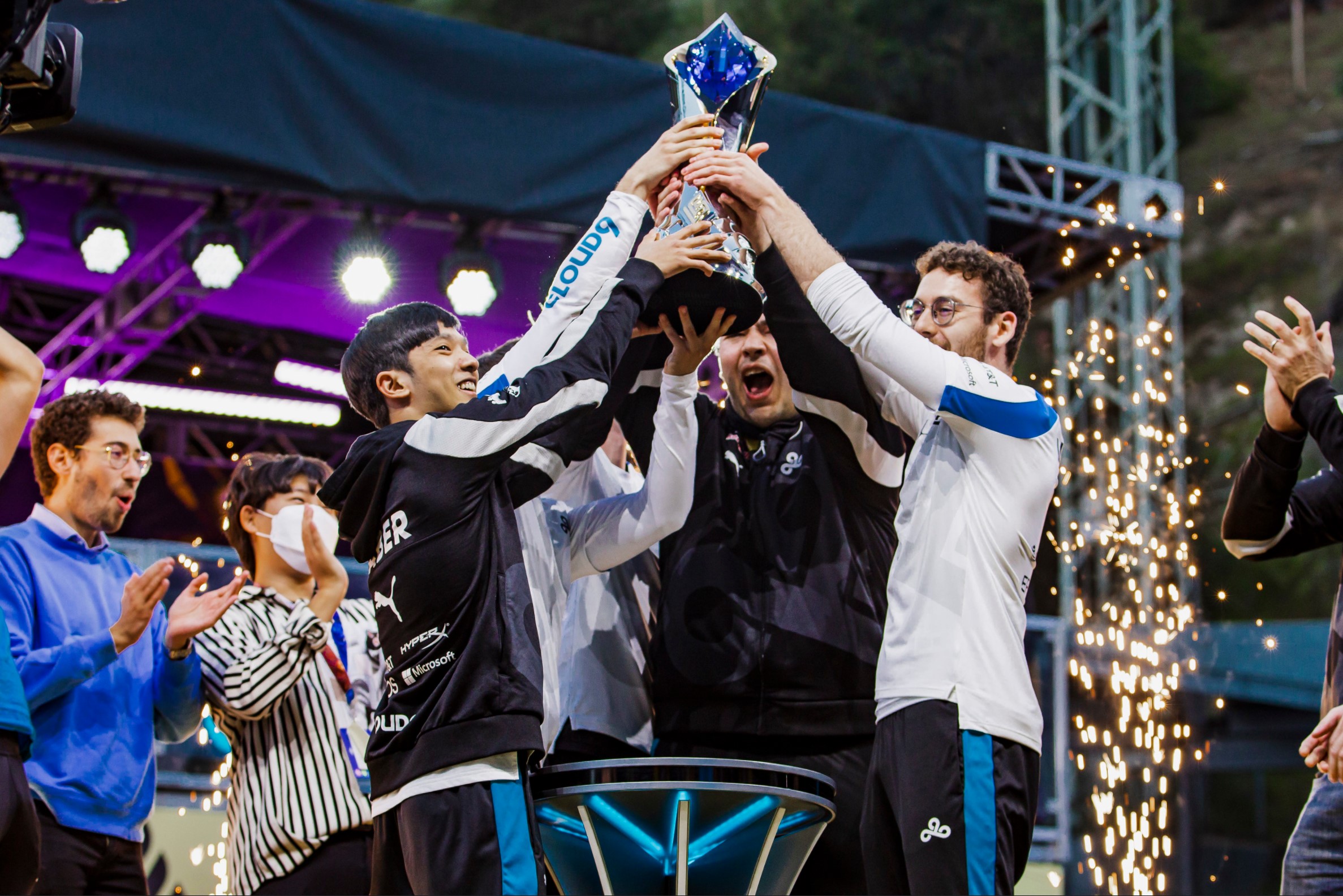 The LCS’ first split under a new rebrand is officially in the books. And so far, the League of Legends league is checking a ton of the right boxes.

Not only did the LCS completely shift its identity and thematic elements in the matter of just a few months, but as an added bonus, fans and players got more games of League in the same amount of time thanks to a refined six-week schedule, as well as two tournaments that bookended the Spring Split.

After toiling with the season’s format for so long, it genuinely feels like the LCS has figured out a schedule that’s concise enough to keep competitive integrity and intrigue intact, while also keeping fans’ attention spans focused on the action.

One of the biggest gripes with the six-week format, however, is that once teams started to really ramp up and get their footing in 2021, the Spring Playoffs were already around the corner. The timeframe between the beginning of the split and the playoffs was much too quick for the stakes to really get dramatic. Perhaps if there were three more weeks to play with, the respective destinies of fringe teams such as Evil Geniuses and Immortals could have been altered.

But even still, the LCS’ new format is much more preferable than a nine-week format, where the regular split is a slog and the playoff picture is decided well before the end of the split.

This past split, the playoff picture was still pretty clear-cut early on, as fans and analysts alike could have predicted that Cloud9, Team Liquid, and TSM would all finish in the top three in some capacity. Lo and behold, when the split came to a close, it was easy to guess which teams were the last three standing.

But while the Spring Split largely went off without a hitch, most of the league’s logistical problems all took place right at the finish line. After three months under a new, rebranded banner, the LCS was finally starting to kill off the running gag of “not being able to get out of its own way.”

And then the Mid-Season Showdown finals happened.

The production value of the MSS’ finals weekend was serviceable, to be sure, but the matches at the Greek Theatre left more questions than fans would have preferred to be asking.

First, what was the point of unveiling a new studio if it was barely used? When the LCS revealed its new in-house production studio just before the Mid-Season Showdown, I couldn’t help but feel excited for the league as a whole. But seeing the studio in action during the Mid-Season Showdown couldn’t have been less underwhelming. During the entirety of the playoff bracket, shoutcasters and analysts did their jobs from home during the broadcast.

The only piece of on-air talent that utilized the new LCS studio to its full extent was host James “Dash” Patterson, who I’m pretty certain was walking around a vacant lot speaking to apparitions up until the last weekend of the MSS—but I digress.

Maybe the experience will be better on the eyes when the LCS Arena is packed with screaming fans in a post-pandemic world, but that vision is still a ways away.

I loved the idea of returning to live venues for events (we can’t get back to normalcy soon enough!), but with a freshly unveiled studio just waiting to be used, why did the LCS feel the need to take the show on the road?

The Greek Theatre and the LCS Studio are only 40 minutes away by car. The two locations are practically Location 1A and Location 1B when speaking about their relative distance. If the Los Angeles Dodgers weren’t playing a home game during the MSS Finals, it would’ve been fun to see if the LCS could squeeze their venue locations even closer together by renting out Dodger Stadium.

All told, it felt like the LCS just wanted to put on a live show for the sake of putting on a live show, even if the only member of the audience happened to be a deer walking down a nearby mountainside.

In total though, if it’s safe to assume every member of the Riot broadcast team has kept up with COVID-19 protocols—which they better be at this stage in the game—there’s no reason why the whole crew couldn’t have been located at the same venue, regardless of whether it was the LCS Studio or the Greek Theatre.

And judging by some of the players’ reactions to the Greek Theatre, it might have been beneficial for the league to hold its finals weekend event in-house. From chilly temperatures to an unstable stage, players were less than satisfied with the setup that the LCS presented last weekend.

The biggest issue the players faced from the venue itself was an 18-minute delay prior to the start of the fourth game between Liquid and Cloud9 caused by glare from the Greek Theatre’s natural lighting conditions. Cloud9’s AD carry Zven even admitted to not being able to make out the timers for Baron and dragon on his screen thanks to the glare, and overall, he noted that the stage “wasn’t fit for competitive integrity” during Cloud9’s post-game press conference last Sunday.

Despite the uncontrollable issues presented by Mother Nature, Zven and Cloud9 secured an LCS title last weekend, punching their ticket to the Mid-Season Invitational in Reykjavík, Iceland next month. And frankly, there’s not a better team to represent North America on the international stage than Cloud9 considering the team’s outright dominance throughout the split, as well as their superstar-lined roster. The team’s ceiling is incredibly high thanks to seasoned stars such as Zven, Blaber, and the newly-added Perkz.

But no matter how well Cloud9 performs at MSI, the LCS can breathe a deep sigh of relief knowing it’s making progress as a league. Breaking down the building blocks and starting from scratch can be a daunting task, especially when the major theme of the league’s rebrand was centered around rookie and sophomore players whose careers might not pan out.

After so many years, however, the LCS finally has an identity. That’s what’s most important. It didn’t matter how well the league’s young stars performed. What mattered was that the LCS shoved them down the viewers’ throats and made them synonymous with the league itself. When the LCS gave Spica, Tactical, and FBI the unofficial title of “faces of the league” in January with their “Made By Many” promo video, the league was sending a clear, obvious message to fans: “This is who you need to be rooting for. And if you’re not rooting for them, you need to be at least keeping an eye on them.”

With more rookies and young players lining the various rosters of the LCS’ teams than ever before, there’s a ton of new faces for fans to get attached to. If you’re a new fan of pro League of Legends, you don’t need to know the lengthy history and lore of some of the league’s most storied players. They’ve all retired. Players like Spica and Tactical resonate with new viewers because, well, they’re new to this whole thing, too.

Even beyond those with the biggest names, there’s an ungodly amount of young talent in North America right now, and they’ll all have the chance to build on their Spring Split showings when the LCS picks up again in June.

And, thanks to another positive format change, every team in the LCS will resume precisely where they left off in spring, as results from the first half of the season will carry over into the second half. This means TSM and Liquid, despite their inability to secure the MSS championship, will start the Summer Split tied for second place, just one game back of Cloud9 at the top of the league. If anything, the race for another LCS title—which features 27 games for each team over the course of a triple round robin—will kick off immediately and be even more heated once teams get back to work on June 4.

Moving forward, it’s almost certain that the LCS will use the 2021 Spring Split as a learning experience, just as it has with every other hardship and challenge it’s faced. Every bump in the road over the course of the last year has made the league stronger. From the universally-panned “Monday Night League” to the various production issues faced by the pandemic, the LCS has taken every occasion on which it’s been ridiculed and turned it into something the league can learn from.

This year, however, there’s far more net positives than negatives. Yes, it was easy to rag on the shortcomings of the first live event that the league held in over a year, but beyond that, the LCS is trending upward. With the boundaries of what’s possible from a social standpoint expanding in the near future, the league should start picking up steam very, very soon.

The LCS has done a strong majority of the legwork by building a solid foundation to stand on in the spring. Now, with a little less than two months to go until the Summer Split begins, the goal for the first season of the “new” LCS is simple and straightforward: finish strong.