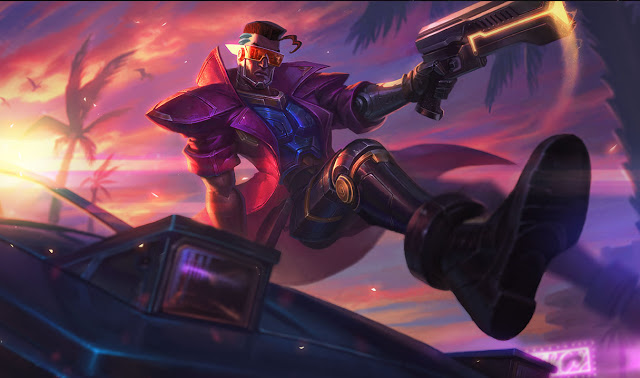 Demacia Vice is the latest League of Legends skin line joining Summoner’s Rift in Patch 9.14, and Lucian and Garen are the first lucky recipients of the stylish new look.

The new skin line takes after the ‘80s television show Miami Vice, dressing its first two models in bright neon-pink attire. Both characters are re-imagined as cops from the fashionable era, and the skins come with new particle and sound effects, brightly colored models, and textures to celebrate the skin line’s release.

Although Riot officially announced the new skin line in June, the two Miami Vice-inspired skins originated as part of an arcade game named Demacia Vice Squad, Riot’s take on the side-scrolling beat ‘em up games. Players chose between the ranged-attacker Lucian or the sword-wielding Garen to fight their way through the ‘80s-inspired streets of Demacia. The game made its debut at last year’s NA LCS finals in Miami but was never released to the public.

Related: League’s Demacia Vice skins started as an arcade game (plus 5 champions that need to be added)

Both skins will cost 1350 RP and will come with seven chromas each for additional purchase.

The skin line won’t have a set release date, but fans can expect the two new skins to become available sometime later this week.