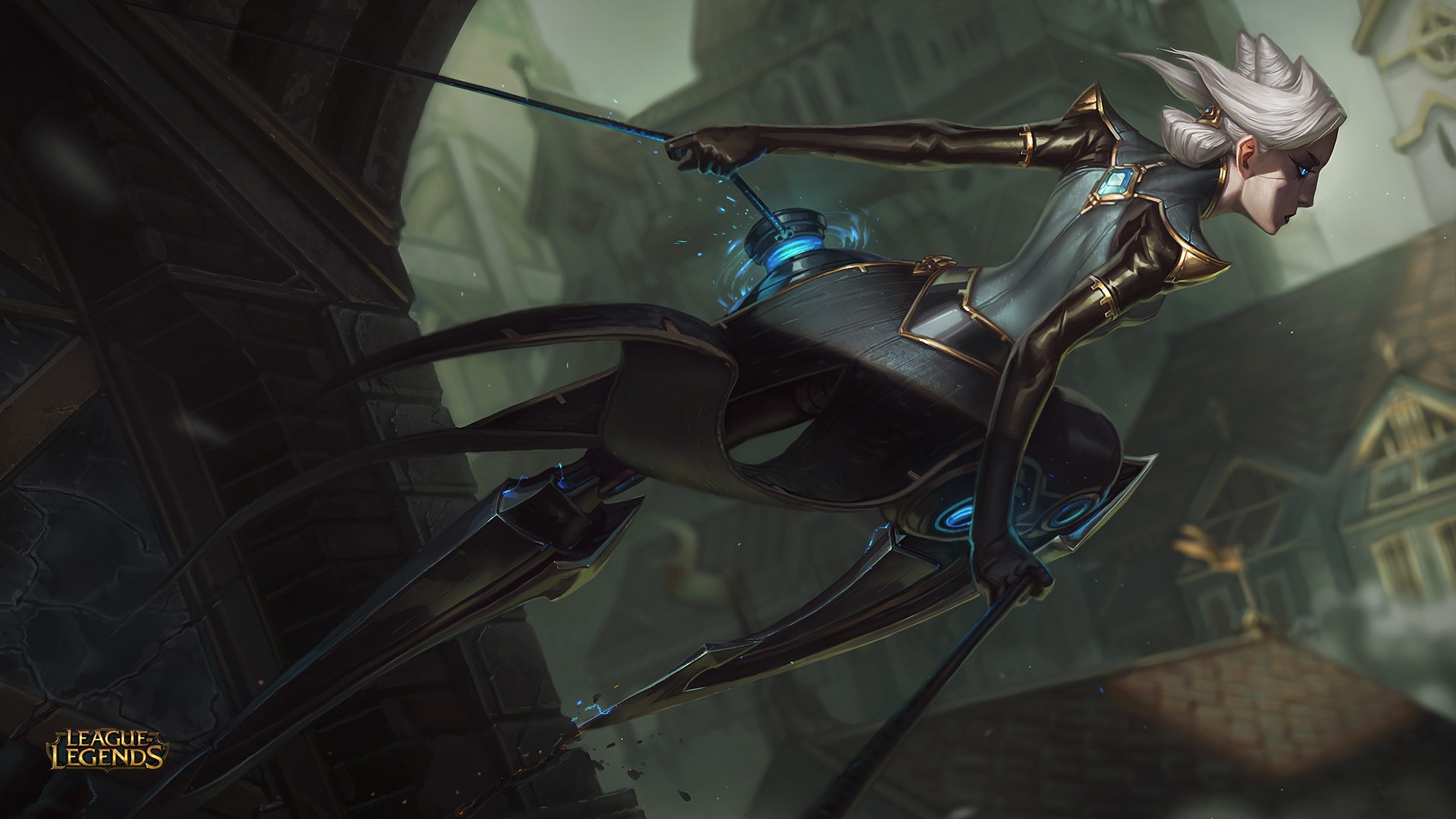 When Camille was revealed in late 2016 as League of Legends’ newest champion, we thought she might be an assassin with fast movement and attack speed and the ability to drop out of nowhere to surprise opponents. Well, she’s a bundle of fun who can lock someone in a cage for a duel to the death. But now, she’s settled into a role as the best AD bruiser in the game.

That’s turned her into a fearsome, splitpushing top laner who’s a threat to take the enemy base all by herself. She still has that ability to solo out a single target, and her flanks over walls can be devastating in teamfights.

But to get the most out of her, you have to combine strong mechanics with good map and minion control in order to take objectives for free.

Camille is a popular pick in the jungle right now and can also play in the top lane. Jungle Camille became a thing in season eight when the importance of early Rift Scuttlers changed the jungle meta. She has a good clear, can contest those early crabs, and is a decent level two ganker due to her damage output. She also scales really well as she’s able to start fights, single out a carry, and control objectives.

In the top lane, she can trade early with her passive, Adaptive Defenses. Basic attacks on champions grant her a shield against the type of damage that champion uses (physical or magic). Adaptive abilities were new to League at the time, but that trend has taken over the game. The overhaul to the rune system late last year gave us adaptive runes, and champions like Kayn and Kai’Sa both have ways to change playstyles on the fly.

Combine her passive with the basic attack resets on her Q, and she can win early trades. Into harder matchups, she can start with W to clear minions and poke from range while getting some healing back.

Her skill order is pretty similar between roles: R>E>Q>W. Her E, Hookshot, is basically Link’s weapon from the Legend of Zelda series. It allows her to fly toward a piece of terrain and then slingshot away. It can cross walls and stun enemies that she lands on. Maxing it first increases its damage more reliably than her Q or her W while reducing its cooldown.

Her Q is next, since maxing it second gives her time to build items and take advantage of the ability’s AD scalings. It’s a pretty standard attack reset with two procs that gives her some range and movement speed. Her W, Tactical Sweep, is a cone-shaped attack that slows enemies and heals Camille if she lands it in the right spot, kind of like Darius Q.

Next, let’s take a look at how we round out Camille’s kit.

Camille’s most popular rune setup is Press the Attack, since her Q attack reset gives her a reliable way to proc the rune’s damage. She can take Conqueror in a pinch, or Aftershock if you’re getting funky. In the Precision tree, her secondary runes are Triumph, Legend: Alacrity, and Coup de Grace. Her second rune tree is flexible: She can take movement speed from the Sorcery tree as a jungler, Shield Bash and Bone Plating from the Resolve tree as a laner, or go into the Domination tree for some one-shot builds.

As far as itemization, she loves the standard AD caster itemization of Trinity Force and Sterak’s Gage. As a jungler, she typically buys red smite with Warrior. In top lane, since she’s not maxing W, an early Tiamat that builds into Ravenous Hydra is also useful. Later on, Guardian Angel and resistances help her survive when she dashes into the enemy team and ults.

Her ultimate sets Camille apart as the queen of duels. It’s basically League’s version of the UFC octagon (though it’s hexagonal in shape). She leaps into the air, becomes untargetable, and lands on an enemy champion. Then she pops a cage that knocks away their friends, and locks them in a cage for 2.5 seconds at first rank and four seconds at max. In the cage, her basic attacks deal bonus magic damage, plus a percentage of the target’s current health, which scales off Camille’s levels.

After the hexagon is thrown down, other champions can enter or leave, but the targeted champion is stuck—Flash, ward hop, and Arcane Shift all will fail to get out of the hexagon. The only ways out are to wait for the effect to end or if Camille herself leaves.

Her ultimate is best used in the middle of teamfights when she can find an isolated squishy target. Camille players should also watch to make sure the rest of the team can follow her engage. She does have to watch out for abilities like Zac or Tristana ultimate that can knock her out of the hexagonal zone and end it early.

The last cool nuance of her ult is its use as an escape tool. Remember, she’s untargetable in the air. So in a pinch, she can ult to avoid CC, hookshot away to safety, and throw down a W for an additional slow if the enemy keeps chasing.

Camille’s playstyle is one of constant pressure: You’ll want to get into your enemy’s face right from the get-go, race them to level two, and punish them for any weakness. Junglers want to go from red buff to scuttle quickly, all while looking for a level two gank. She can then finish one side of the jungle, recall, and head to the other side.

As a laner, she should be playing forward a lot, relying on vision and her E to get her out of sticky situations. In the late game, Camille wants to set up picks and control side lanes with her mobility. She’s not as good in front-to-back teamfights, but can kite decently well.

But her home is the side lanes. Give her time and minions to push, and watch Camille go to work.