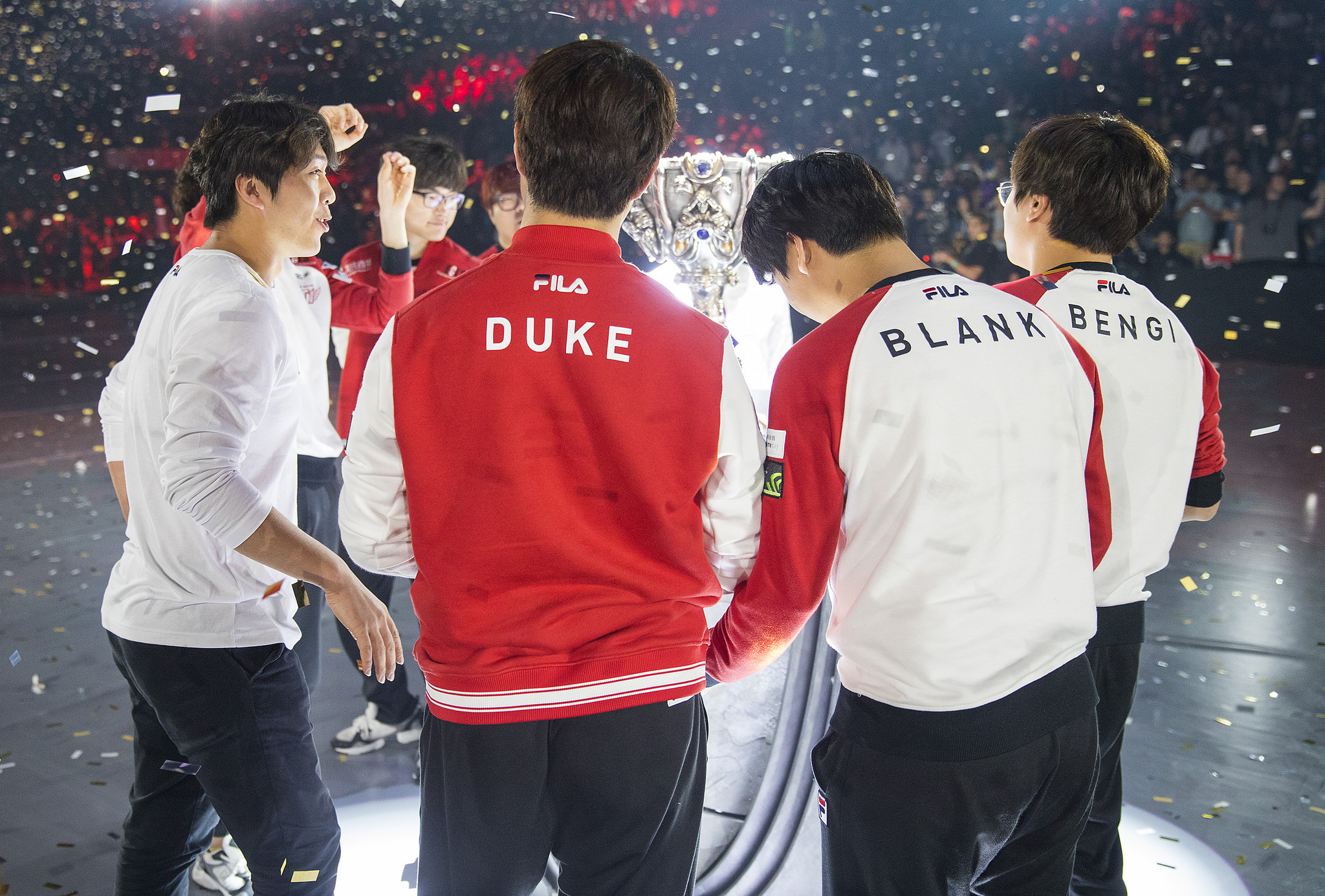 After a week of nonstop roster shuffling, including adding new players, releasing old players, and free agency, the off-season’s roster craze is slowing down. More and more teams from major regions have begun finalizing their roster, and among those is three-time world champions SK Telecom T1.

The most decorated team in League of Legends history looks almost entirely new for the upcoming competitive season. After demolishing their roster, leaving only a couple of players still standing on the bench or starting roster, SKT needed to pick up a ton of new players. They did so in just a matter of a few days, and now, their new team is dubbed the “super team” of the LCK, a title that has belonged to KT Rolster for the last couple years.

Here is the entire nine-man roster that SKT will be fielding in 2019.

Khan is one of the few names in SKT’s new roster that will be almost instantly recognizable to any League fans around the world. At least, it will be to those who have been following the esports scene for at least the last two years, because Khan’s name was thrown around a lot in 2017.

He was the star player and poster child for Longzhu Gaming, a team that was fraught with strife during the 2017 Spring Split who then came back to crush the Summer Split and head off to Worlds as the frontrunners. Of course, they didn’t make it to the finals, but there was a reason Khan’s name was used a lot by analysts—he’s really good. Khan is one of the most mechanically gifted top laners in the world, and he’s known for playing carries and drawing two or three enemy players up to his lane to stop him, and winning the fight more often than you’d think.

He spent 2018 on Kingzone DragonX, the rebranded Longzhu, but was mentioned a lot less due to the team’s year being overall lackluster. Khan is still scary, however, and one of the most noteworthy additions to SKT’s roster.

SKT’s second top laner is less noteworthy, and the only team he’s played for that most international fans recognize is bbq Olivers. Kim “Crazy” Jae-hee spent last year on bbq, one of the LCK’s worst teams. In fact, they were relegated from the league at the end of the 2018 Summer Split, and most of their former players have already found new homes.

Crazy is a young player, though, in terms of competitive experience. He hasn’t been exposed to much of anything, and has only been playing competitively since 2015. With no international experience and no tournament experience outside LCK promotion series, he’ll be able to play behind Khan and learn from SKT’s veterans. He has a chance to be a very solid addition to the lineup, which would (hopefully) expose him to much more competition.

Haru is the second of three additions to SKT’s roster who is instantly recognizable. He was with Samsung Galaxy when they hoisted the 2017 Summoner’s Cup. In fact, Samsung beat SKT to grab that trophy, so SKT fans will know who he is even more.

While it’s true that Haru and Gen.G, the rebranded and renamed Samsung Galaxy, didn’t have such a stellar 2018, at least they made it to Worlds again, which is more than SKT can say. And as far as junglers go, there aren’t many better options. Haru has a reputation for being one of the better junglers in the region, so it makes sense that his next move away from former champions Gen.G would be to move to another, more successful former champion team in SKT.

Clid is to Haru what Crazy is to Khan. He’s less experienced and less pedigreed, but he could be a solid choice in the jungle when SKT wants to flex different strategies. He’ll need some more experience and exposure to get to that point, however.

Clid has spent his entire professional career in China on JD Gaming, QC Reapers, and Newbee Young. He’s no Kang “TheShy” Seung-lok, but he still made some pretty solid playoff appearances over the past couple of years in the LPL, including a third place finish this past summer. He and his team were knocked out of the regional gauntlet, but it was still the most successful split of his career yet. He has shown promise over the years in China, so the fact that SKT picked him as their backup jungler isn’t all that surprising. He’s young talent, like Crazy, and SKT could be the team to unlock his potential.

As one of the starters on SKT’s new roster, Teddy probably has the least international recognition of the lot. He’s still a strong choice, though, just not nearly as accomplished as Khan or Haru. He’s only been playing in the LCK for the past couple of years, and most of that experience comes from playing on one team—Jin Air Green Wings.

As a team that placed consistently below fifth place in the LCK, that’s probably not great news for SKT fans who aren’t aware of Teddy himself. But Teddy is still a solid pick, as he was one of Jin Air’s best players at the very least, really coming into his own this past year despite the team’s eighth place finish. Paired with his new veteran support, he should be able to keep the upward trend of his individual performance going and may yet turn into one of the LCK’s great bot lane carries.

We’re sure you’re picking up a trend here, but Leo is to Teddy what Clid is to Haru and what Crazy is to Khan. While Teddy himself has only been playing in the LCK for a few years, this will actually be Leo’s professional debut. In other words, he has no professional experience, and now he’ll be able to learn from some of the best players in the game’s history. That being said, there isn’t much to say about him yet, but he did end the 2018 ranked season as one of the best players in Korean solo queue, according to his OP.gg profile.

Mata is the last of the three new starters that are instantly recognizable by the League esports community at large. He spent the last two years on KT Rolster’s famous, or infamous, super team. It’s famous if you consider the fact that only the best individual players in the region were added to KT’s roster, but infamous if you know how they performed in clutch situations (spoiler: it wasn’t great).

Mata was one of KT’s shotcallers, and that’s something that was lacking from SKT’s new lineup until he was picked up. As one of the best play-making supports in the region and a pedigreed shotcaller, he’ll be able to move the SKT pieces across the Summoner’s Rift chess board and simultaneously learn and be honed by the team’s coaching staff. That’s how it’s supposed to work, anyway. As long as he can learn with his new teammates to play under pressure, it doesn’t seem too far off to think that this roster may be what helps SKT make their comeback. Still, it’s too early to say.

Effort is the only name on this list so far that SKT fans will recognize as a former SKT player. In fact, he was the team’s backup support player in 2018 behind Lee “Wolf” Jae-wan, which means he’s staying with the team to be their backup support in 2019, too. This time, however, it will be behind Mata.

The last member of SKT’s roster needs no introduction, as he’s been with SKT through all of their international and domestic successes in League. Faker is one of the best players in the entire world, and he’s spent most of his career considered to be the best in the world without much question. With three Worlds titles, two MSI titles, and four LCK titles under his belt, he’s going to attempt to lead his all-new roster into redemption.

Sure, they’ll have to overcome the same sort of hardships that most new teams overcome, being communication and synergy issues. But if they can do that, the individual skill on this team, especially Faker, indicates a strong playoffs run and at least a Worlds appearance. Anything less would mean more disappointment, especially from this stacked roster.