“Reunited, and it feels so good.” 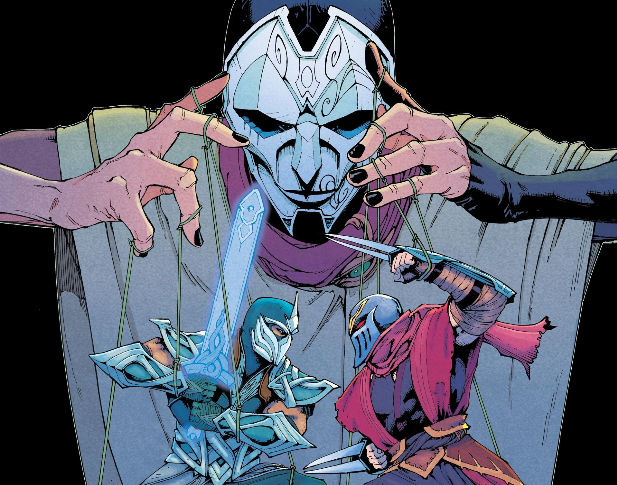 It seems like Zed will do anything to defeat Jhin—even if that means joining forces with his enemy.

The third issue of Zed is out now, picking up from the Master of Shadows’ search for his estranged friend Shen. Khada Jhin has returned and is wreaking havoc on innocent civilians (in groups of four, of course), forcing Zed to make an alliance with the Kinkou to take the Virtuoso out. But Shen hasn’t quite gotten over the fact that Zed killed his father (I wonder why?).

Before we dive deeper into Issue Three, read the full comic for yourself on Riot’s Universe Page.

Issue Three begins with Zed and Shen finally reuniting. Shen immediately goes on the offensive, aiming to kill the man who murdered his father. But Zed foolishly tries to talk some sense into him, risking his life to prove a point: “Your father’s ideals were a weakness Ionia could no longer afford.”

A brief flashback shows the moment Zed became the Master of Shadows, while also alluding to the moment he killed Shen’s father, Master Kusho. After battles with the Noxians went south, Zed needed something to turn the tides in his favor—the Tears of the Shadow. Though Kusho advised against it due to its “not of our world” power, Zed claimed it and earned its strength.

As the story goes back into the present day, Shen eventually relents on his attack when Zed informs him that Jhin is back. Though he agrees to catch Jhin, he wants nothing to do with Zed and goes on the search alone.

Meanwhile, Zed’s disciple, Kayn, and Shen’s student, Akali, do some flirting in the streets. But when Akali sees Zed emerge from his discussion with Shen, she immediately attacks the Master of Shadows. It didn’t go too well for her: “Because you are Shen’s student, I will ignore this insult.”

Zed leaves his band to follow Shen, leaving Kayn as his successor should anything fall upon him. Shen is an excellent tracker, following even the tiniest leads to Jhin’s whereabouts. The tracks eventually lead the Eye of Twilight to the town of Nanthee.

But as Zed is hiding in the shadows, he noticed something devastating—the lanterns strewn across the town are all bombs.

As League fans get a closer glimpse into the relationship between Zed and Shen, it’s easy to sympathize with either of them. Shen lost his father at the hands of a murderer and Zed needed to claim the out-of-this-world power to defeat the Noxian army. The estranged friends will likely need to band together if they want to defeat Jhin once and for all.

Issue Four will be released on Feb. 12.