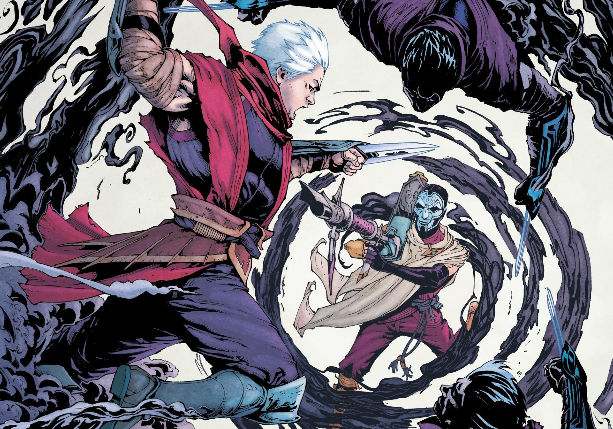 When it comes to comics, Riot Games really knows how to pour on the drama.

The second issue of Zed released today, which picks up with Jhin’s ambush on the Master of Shadows as he lures him into an all too familiar trap. Readers also get more insight into the tension between Zed and Shen—hint, hint, there’s a love interest involved—which may culminate in a final face-off or a compromise of sorts.

Fans are encouraged to read the full comic on Riot’s Universe Page before we delve deeper into Issue Two.

Issue One ended with Zed being baited into a trap by the maniacal marksman in Kotha, a village that Jhin previously attacked when the Master of Shadows was young. This encore performance quickly ended with four of Zed’s students erupting into flowers from Jhin’s gunshots.

Zed wasn’t going to sit by idly and let Jhin wreak havoc on his band of thieves, however. As he chased Jhin to enact his revenge, he was once again wrapped up into another one of the Virtuoso’s ploys—a Blossom Festival.

This scene led directly into a 16-year-old flashback where Zed was captured by Jhin, who tied him up with the intention of creating a light show full of explosions and innocent casualties. But Jhin was the one who was set up because Shen and his father, Master Kusho, came to save Zed in the nick of time.

Though the young Master of Shadows wanted Jhin dead, Kusho refused to murder because the Kinkou don’t “judge or kill… no matter the cost.” Zed, obviously, didn’t abide by those same principles.

Fast forward back to present times and Zed was unable to thwart Jhin, who detonated an explosion of fireworks and carnage at the festival and left the Master of Shadows to take the blame.

Shen still refuses to chase after Zed for such a trivial reason like vengeance, even with Akali trying to persuade him. So she goes off on her own to do what her former master is unwilling to do—kill Zed.

Three weeks later, Zed visits the estate of Shen’s former fiancée, Lady Yevnai, in search of the Eye of Twilight’s whereabouts. Readers discover that Zed was responsible for the engagement being called off because he kissed Yevnai and killed Master Kusho. Though the Lady of the House eventually tells Zed where Shen might be, she does warn him: “If you go to see Shen… he will kill you… he deserves that vengeance.”

But Zed has no intention of killing his old friend—yet. He simply can’t catch Jhin alone.

Though fans might be eager to see the reunion between Zed and Shen, it seems the two may be falling directly into place with Jhin’s plans. And while Shen preaches about the dangers of vengeance, it’s unclear how he’ll react when he sees the Master of Shadows—a brother who took everything from him.

Issue Three will be released on Jan. 15 and is titled “Duel,” which may hint at a showdown between two old friends.