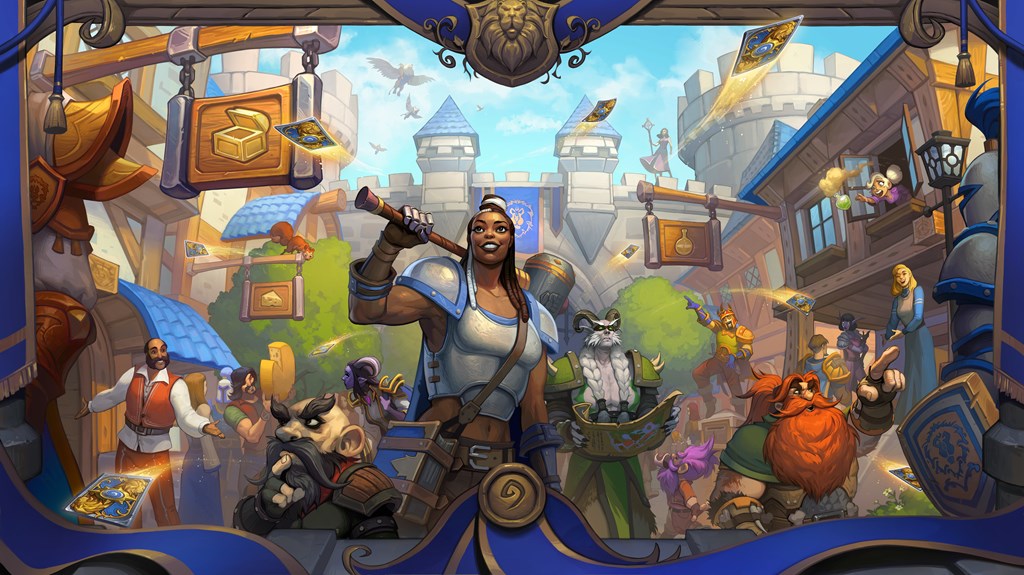 During today’s announcement stream, Blizzard Entertainment revealed the next set for the 2021 year for Hearthstone, United in Stormwind. Following the events of the first expansion of the year, Forged in the Barrens, United in Stormwind is bringing 135 with two new keywords, Tradeable and Questlines.

Related: What is a Hearthstone Questline from United in Stormwind?

Within those cards are the highest rarity you can find, Legendary. Each class will be receiving two Legendary cards, with one being one of the Questlines.

Here is every Legendary coming with United in Stormwind. 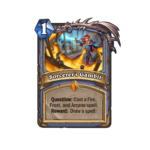 Mage’s Legendary Questline has you cast an Arcane, Fire, and Frost spell at each step of the way. Completing the first two quests provides you bonus spells which helps you complete the rest of this quest chain.

Once you complete the overall Questline, you gain Arcanist Dawngrasp, which gives your hero a permanent three damage spell bonus for the rest of the game once they are played.

Archmage Antonidas has been retrained into a Fire Spell support minion that lets you deal six damage three times against a random enemy if you keep a chain of Fire Spells casted between three turns. While his text states he casts Fireballs, Grand Magus Antonidas’ effect is not boosted by spell damage.

This new iteration of a past Priest Legendary allows you to tap into the Shadow school of spells to gain a powerful start-of-game effect. If every spell in your deck is Shadow-based, you start the game in Shadowform. This transforms your starting hero power to deal two damage instead of heal.

This allows you to build your deck with more aggression in mind as opposed to controlling and responsive play.

Priest’s Questline has you play cards of specific mana costs, with two, three, and four for the first stage, five and six for the second part, and seven and eight for the final step. Both rewards for the first two portions let you Discover a card from your deck to draw. Xyrella the Sanctified herself is a Taunt card and shuffles a Purified Shard into your deck.

The Shard itself costs 10 mana and has an ability that destroys the enemy hero. Since it’s a spell, it can be countered by cards like Counterspell and Oh My Yogg, so be considerate of enemy secrets. 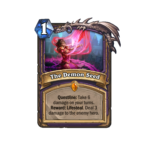 Warlock’s Legendary Questline has you deal damage to yourself during your own turns, ramping up the amount as you progress further through the quest. When you complete the first two quests the enemy hero is drained for three health, giving you more life to work with as you try to complete this quest.

Once you complete the overall Questline, you earn Blightborn Tamsin, which grants you the powerful ability that sends any damage you would take on your turn go towards the enemy hero.

Anetheron has a strong cost reduction ability that discounts himself to one mana if your hand is at the full 10 size. The new legendary demon serves as a potential supplement to Handlock builds that will arrive in standard.

Lost in the Park

Druid’s Legendary Questline requires you to gain power with your hero, starting with four, five, and finishing with six. When you complete all three stages, you are given Guff the Tough, who gives you eight power and eight armor. In addition to this, Guff is an 8/8 with Taunt.

Druid’s Legendary minion augments your next three spells drawn to automatically cast for free and draw another card immediately after activating. This scales well with more expensive spells with consistent abilities since you don’t need to spend your entire turn playing the spell for its cost.

Jace Darkweaver’s Battlecry synergizes well with Fel spells, most of which are consistent abilities that deal damage. His ability allows you to build a burn deck that will deal immense damage if you can draw your cards in the right order.

Demon Hunter’s Questline requires you to draw multiple cards in one turn, starting with four, then five for the last two steps. Whenever you complete a stage, all of the cards drawn get their mana cost reduced by one.

Once you complete the overall Questline, Demonslayer Kurtrus’ Battlecry will provide you with a powerful effect that reduces the mana cost of any card you draw by two for the rest of the game.

Shaman’s Questline requires you to play Overload cards over the course of the game, starting with three for the first two steps, and two for the final stage. Completing the first part removes all Overload from your mana crystals, the second step summons a 3/3 Elemental with Taunt, and the final stage provides you Stormcaller Bru’kan.

Stormcaller Brukan’s Battlecry ability gives all of your spells the ability to cast twice for the rest of the game, with same exact targets as the original activation.

Shaman’s Legendary minion is a powerful combo tool that can generate value with Battlecry related minions. When using Bolner, you must be mindful of how you order your cards as the first Battlecry played will be the one that is replicated. This means you should use your stronger Battlecries as the initial card played to generate the most value.

Tavish has a powerful Battlecry which enhances your hero power even further and refreshes it each time you play a spell.

Hunter’s legendary minion is a powerful board control tool for decks which focus on token summoning. Whenever the Rat King dies, he goes dormant and can be revived whenever five other allied minions die. Since The Rat King can never die, the only chance opponents have at removing him are through transformation effects.

Rogue’s Questline forces you to play SI:7 cards, two at every stage, to ultimately complete it. Whenever the first two steps are completed, you are given a random Spy Gizmo, and Spymaster Scabbs himself has a Battlecry which grants you one copy of each Spy Gizmo once he is played.

Here are all of the Spy Gizmos that can be generated:

Maestra of the Masquerade

Rogue’s newest Legendary minion provides a unique way to mess with your opponent starting in the mulligan phase. If you have Maestra in your starting deck, she will change your class temporarily from Rogue until you play a Rogue card. This means you’re allowed to keep up the ruse and fake out your opponent if you play neutral cards and use your new Hero Power.

Rise to the Occasion

Cariel’s Questline requires you to play three different one-mana cards at each step of the way. This does not mean you need to play nine unique cards, since you can play a duplicated one-mana card as long as it was played at a different stage of the questline. The first reward equips a 1/4 weapon for you to use, the second reward upgrades your hero power, and Lightborn Cariel herself grants your Silver Hand Recruits a permanent +2/+2 buff for the rest of the game.

Paladin’s Legendary minion grants immense hand buff potential each time a Divine Shield is popped. This means you should try to play Highlord Fordragon while you have a board full of minions with Divine Shield and are ready to trade.

Warrior’s Questline requires you to play three pirates for the first stage, and two for the last two parts. The first reward draws a weapon from your deck, the second deals two damage to a random enemy twice, and the final reward grants you Cap’n Rokara.

Rokara has a Battlecry which summons The Juggernaut to your side of the board, a card that cannot be interacted with that has a powerful ability that activates at the start of each of your turns. During each of your rounds, a random Pirate is summoned, two damage is dealt twice to random enemies, and you equip a random Warrior weapon.

Warrior’s Legendary minion is a controlling tool that can grind out the opponent’s board through constant end-of-turn battles. If the opponent can only put up weak threats each turn, Lothar will constantly attack into them, and be able to deal more damage in the future and gain more bulk to survive future combats. His +3/+3 bonus gain only triggers on his effect-based attack, and naturally trading in will not work. 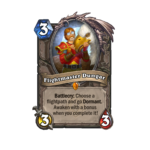 The first neutral Legendary minion revealed provides an interesting take on the Dormant mechanic. As opposed to being unusable for two turns, you select how long Flightmaster Dungar is sent away for the moment you play him between one, three, or five turns as your options. Depending on which flight path you selected for him, he activates a different effect.

If the prospect of this card excites you, you do not need to wait until United in Stormwind releases. Flightmaster Dungar is available for players to claim right now by signing into the game.

Auctioneer Jaxon’s ability is tied to the new Tradeable mechanic. Whenever you spend one mana to send a Tradeable card back to your deck, instead of drawing a random card, Auctioneer Jaxon will allow you to discover a card to draw while she’s on the field.

Cariel and Tamsin’s dad appears as a neutral Legendary with immense card draw capability. At the start and end of each players’ turns, Cornelius will draw a card from your deck. This means Cornelius will essentially draw you two cards at the bare minimum. If the opponent fails to answer him, you will be granted incredible amounts of value and outdraw your opponent quickly.

Lady Katrana Prestor, Onyxia’s human disguise, has a wacky Battlecry that will transform minions in your deck into random dragons—but with the caveat that they will retain their original stats and costs. While her effect is exciting, there is too much variance to reliably expect good results from Lady Prestor’s transformation.

Varian is similar to Cornelius in the how he can draw multiple cards and serve as a refuel engine. While Varian can draw up to three cards, another important distinct with him is that he can also tangibly affect the board if you fill your deck with minions that feature all three keywords.

Players can sign into Hearthstone and get Flightmaster Dungar for free. Players can pre-order United in Stormwind by either purchasing the Standard Bundle, which has 60 packs for $49.99, or gain access to Lady Katrana Prestor and Ve’nari Alternate Battlegrounds Bartender through the Mega Bundle and 80 packs for $79.99.