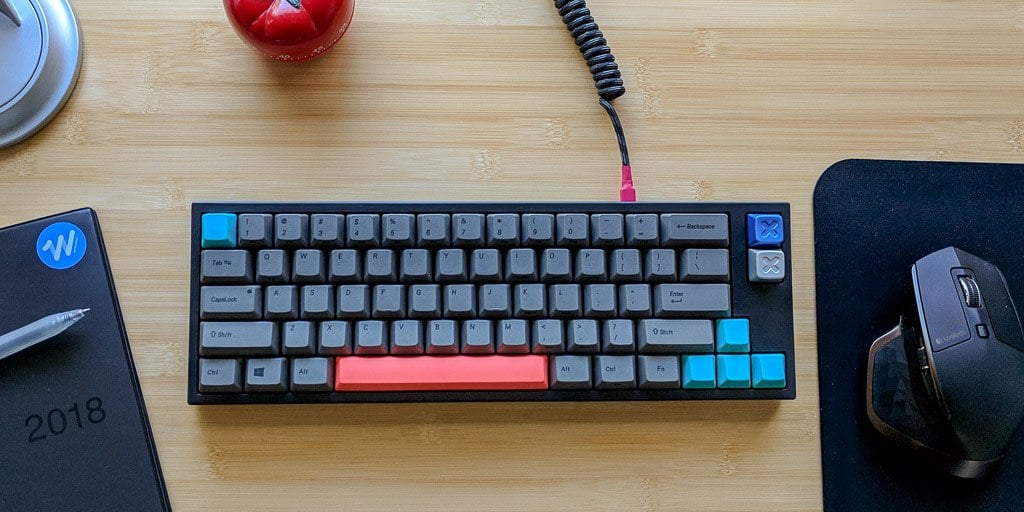 Mechanical keyboards are the go-to choice of all competitive gamers. Their low response time and special switches make them a powerful weapon to have in multiplayer games. But any computer user who just enjoys typing can also be in the market for these keyboards. The nice “click” sound the keyboards make has spawned devotees all over.

The size of the keyboards has been the main issue of low-DPI mouse users alongside people who just don’t have enough desk space. Most feature dedicated macro keys and a numpad, which occupy a lot of space. To be fair, a majority of users can do without a numpad and don’t use the macro keys due to the nature of their usage.

For those who want a little bit more space to move and travel with their equipment, compact keyboards emerged. The options are endless in the market and picking the right one for your needs could be a struggle.

We’ve gathered the best compact gaming keyboards on the market right now to help you on your quest to find the right keyboard. 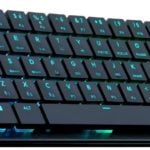 Cooler Master produces some of the most customizable mechanical keyboards on the market both with its switch options and software.

The SK621 is one of the lightest compact mechanical keyboards, weighing only a pound. The keyboard has a 60-percent layout and features Cherry’s new MX Red switches that had their actuation point lowered by an extra 0.8 millimeters.

It can also be used wirelessly thanks to its integrated Bluetooth. If you don’t turn on its RGB lights, the keyboard can go up to four to five months without charging. 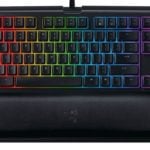 Razer, a household name in gaming, has a track record of making innovative products.

The original Blackwidow was and is a great keyboard overall. It’s only problem was that it was too bulky. The tournament edition of the legendary keyboard fixes all that by shrinking its size. It lets you choose between three Razer switches that all have different actuation forces and an actuation vs. reset point value.

It also comes with a comfortable wrist rest that can be removed if you prefer to do so. 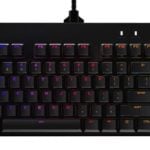 Choosing the right switch when buying a keyboard can be tough. You may end up not liking your choice and it may be too late to get a new one.

Pro X’s switches can be changed manually—given that you have the right type of switches. This essentially prolongs the lifetime of the keyboard. Logitech has three types of switches in its store that can be used with the Pro X: GX Blue Clicky, GX Red Linear, and GX Brown Tactile switches.

Thanks to its tenkeyless design, it can easily be carried around and fit into any bag with its detachable cable.

It doesn’t have any macro keys but the function keys on top of the keyboard are fully customizable with Logitech’s G-HUB. 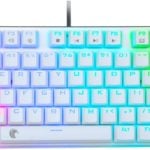 Though it may feel like the price tag should also decrease alongside a keyboard’s size, it could be quite the opposite if you’re shopping through the industry’s household names. Budget options may feel as premium as your reputable brands, but most of them last as long as them, if not longer.

E-Element Z is a stunning keyboard that offers an unheard number of customization options in its price range. You can choose from five different board colors: black, blue, gold, pink, and white. E-Element Z also lets gamers select the type of switches they’d like in their keyboards, and you can pick one from the Outemu Blues, Browns, or Reds.

If this is the first time you hear about Outemu switches, the company also produces Razer’s switches for them, so they certainly aren’t strangers to the mechanical keyboard game.

This tenkeyless keyboard comes with 10 different light modes. While the mods are miles away from the RGB you’ll get in more expensive models, they still look pretty. The keyboard is mainly made out of ABS and metal. There’s a matte feeling on the keyboard, which you can feel when you slide your finger around its frame.

The keyboard lacks the dedicated media keys, but it’s also rare to see in small form factor keyboards. You’ll need to use the FN key alongside the function buttons as a replacement. 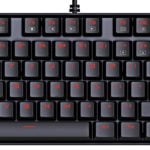 Redragon is known for putting out quality products that cost half as much as the competition. It gained popularity because its products were as good as the more expensive options on the market—if not better.

On a positive note, the keyboard comes with a gold-plated USB connector and decent keycaps. It’s also splash-proof, so you can enjoy your meal in front of your computer without worrying. 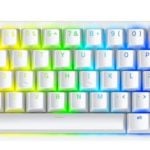 Razer’s Huntsman’s line has been a game-changer for the company’s approach to mechanical keyboards. Razer always had the Blackwidow series as a nice stable piece but hesitated from experimenting with different setups. Though the Blackwidow line continues to improve with new quality-of-life features, the Huntsman line slowly became the pioneer of what Razer had to offer in terms of keyboards.

Huntsman keyboards feature Razer’s optical switches that take advantage of a light technology to make them more responsive. While the first iterations of the keyboard were only in full-sized cases, Razer recently introduced a 60-percent form factor of the Huntsman.

Huntsman Mini features all the core characteristics of what makes it the unique keyboard that it’s. Razer completes this setup with Doubleshot PBT keycaps that have side-printed secondary functions. These functions will help you get the same amount of functionality you’d get from a full-sized keyboard from your Razer Huntsman Mini.

You’ll have to pick between Purple Clicky Optical Switches and the second generation of Razer’s Red Linear Optical Switches. The second generation of the Linear Reds is considerably more silent than its predecessor, and you can check out the sound comparison on Razer’s official webpage. While Reds are known for being good for gaming, the Purple switches could confuse first-timers.

The Purple Clicky Opticals are the equivalent of your classic Blue switches, which are mostly preferred by gamers who type more than they play games. There are a total of six different light modes, but you can also install Razer’s software to customize them by yourself or download other modes that you may like. 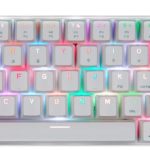 Like Ducky, Motospeed also gained a decent amount of popularity by featuring the essentials of a mechanical keyboard for anyone who’s on a tight budget.

Its 60-percent design makes the keyboard easy to carry around. It can also be used with phones and tablets with Bluetooth functionality. The keyboard features Outemu Blue switches, which are considered identical to the Cherry MX Blue switches. 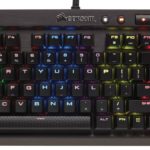 Corsair joins the fray with a tenkeyless version of one of its iconic keyboards. K65, however, is a bit bigger than its competition because it has dedicated media keys on its forehead. It’s also a full-sized keyboard with standard key spacing.

The 65 features an aluminum frame and also comes with a wrist rest. You can choose between Cherry MX Speed and Red switches to go with your keyboard and your needs. Cleaning the keyboard is easy as well thanks to the included keycap remover tool. 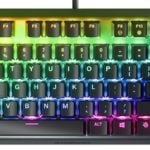 SteelSeries has been in the keyboard game for a long time and it has quite the reputation of upping its game with every product cycle.

Alongside its aircraft-grade aluminum body, the Apex Pro TKL features OmniPoint switches that are considered to be the latest innovation in terms of switches. OmniPoints’ actuation points can be adjusted both for gaming and typing. This can be done via the OLED display on the right corner of the keyboard.

If you’d like to keep it traditional, you can also opt out or have Cherry MX Red, Blue, or Brown switches. 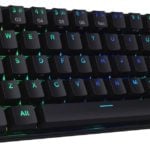 The Redragon K552 isn’t the only compact keyboard that the company has to offer. If you’re looking for an even more compact solution and don’t prefer Blue switches, then K530 might be the one for you.

What makes this keyboard more unique than Redragon’s other products is that it can also be used wirelessly. The keyboard comes with two connection modes: wired Type-C and Bluetooth 5.0. The 2400 mAh battery should be enough for days of gaming, and you’ll be able to use your K530 with up to three different devices. Redragon’s K530 features one of the better RGB setups in this price range and comes with Brown switches.

Though Redragon doesn’t disclose the branding on the switches, the manufacturer’s reply to a customer question on Amazon indicates that the switches were an end product of a collaboration between Outemu and Redragon. The keyboard still ships in a box that fits its size, but also comes bearing gifts. You will get two switch pullers, a box of backup switches (Black/Red/Brown/Blue), and a user manual to get things going.

The switch pullers you get will especially come in handy when you decide to clean your keyboard since cleaning a mechanical board with its key attached is quite a challenging task. 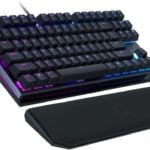 As more switch manufacturers emerged, more affordable keyboards became available. It looks like a win-win scenario from outside, but this increased the amount of research you’d need to do to find a keyboard with genuine Cherry MX switches by a considerable margin. It’s easy to find them if you’re looking to custom build a keyboard, but your options will be limited when it comes to commercially available models.

Cooler Master MK730, however, is one of the most delicate Cherry MX keyboards out there that features a small form factor. The tenkeyless keyboard comes with a removable wrist rest, which increases the overall comfort.

The keyboard uses a detachable braided USB Type-C cable that also makes carrying it around easier. You’ll have the option to choose from Cherry MX Red, Blue, and Brown switches, each guaranteeing lifespan of 50 million keystrokes. Cooler Master takes its RGB game up a notch by installing an RGB light bar around the keyboard’s bottom, which gives it a nice and sleek look.

Though you’ll need to download Cooler Master’s software to do finer customizations, the on-the-fly controls are also enough to get most things like switching the RGB mode or recording a macro.