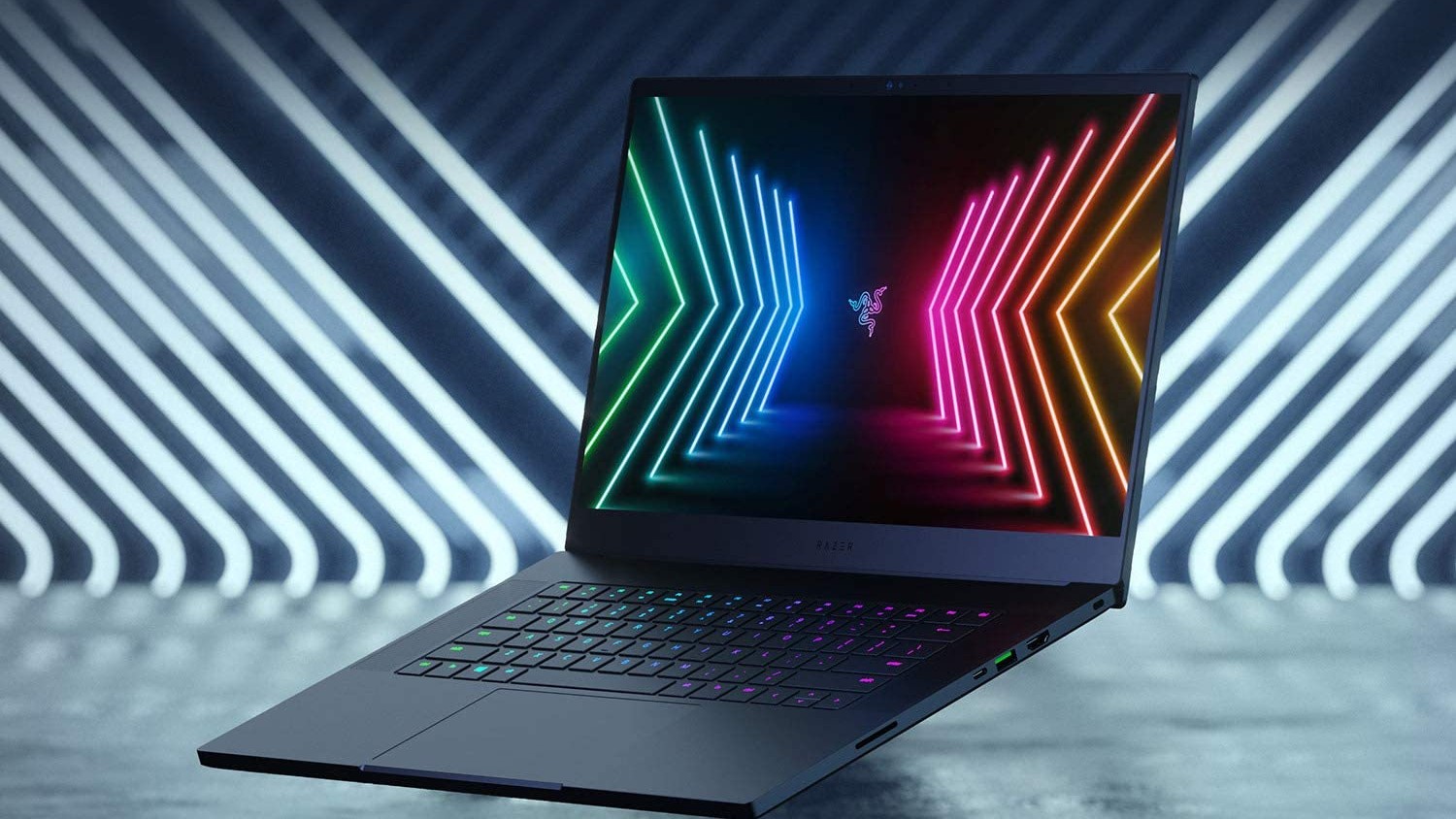 There’s been a drastic jump in refresh rates over the last couple of years, and some monitors now reach up to 360Hz. The trend started with standalone gaming monitors, but gaming laptops have caught up and also offer high refresh rates.

Buyers looking for high refresh rates might opt for 240Hz laptops. These laptops have fast enough refresh rates for competitive gaming, and many use the latest-gen graphics cards. More importantly, they offer similar specs and performance to 360Hz alternatives while costing less at the expense of a lower refresh rate.

MSI’s GS66 Stealth 11UH differentiates itself from many 240Hz laptops by having a 15.6-inch QHD 1440p screen instead of a full HD 1080p display. This resolution is also known as 2K and sits between 4K UHD and 1080p. It gives users a reasonably high resolution without compromising on speed.

To push the high frame rates and other graphic elements like ray tracing, the GS66 Stealth 11UH uses the Nvidia RTX 3080 graphics processing unit (GPU) with 16 GB GDDR6 RAM. This GPU is currently the fastest option for laptops and delivers the best performance currently possible.

Apart from its graphics, the GS66 Stealth 11UH has all-around high specs to handle any game without breaking a sweat. It uses the latest Intel Core i7-11800H operating at 2.4GHz and overclocks to 4.6GHz. The GS66 Stealth 11UH also comes with 64GB RAM and a one terabyte NVMe SSD.

This laptop doesn’t come cheap, but it has relatively high specs that prevent it from becoming obsolete anytime soon.

The Gigabyte Aorus 15G YC uses the same Nvidia RTX 3080 GPU as the GS66 Stealth, but it has less RAM at only 8GB GDDR6. Instead of QHD 1440p like the GS66 Stealth, the 15.6-inch screen on the Aorus only hits full HD 1080p. While its resolution is lower, the high-end GPU still delivers enough performance to run any game at its highest settings.

Despite its slower processor, the Aorus 15G YC is still a blisteringly fast laptop, and its lower price somewhat mitigates its performance difference.

The Razer Blade 15 offers the exact QHD 1440P resolution as the GS66 Stealth, but it has a lesser GPU. Instead of having the RTX 3080 like the other laptops mentioned so far, the Blade 15 uses the RTX 3070 with 8GB GDDR6 RAM. It’s only one step below the RTX 3080 and uses the same Ampere architecture.

Like the Aorus, the Blade 15 uses an older 10th-generation Intel processor. It has the i7-10875H processor operating at 2.3GHz and overclockable up to 5.1GHz. For a pricey high-end laptop, it’s a bit disappointing that it only has 16GB RAM, although the one terabyte SSD is acceptable for its class.

While the Blade 15 may lag behind the GS66 Stealth and the Aorus 15G YC when it comes to performance, it excels in other areas. It has an aluminum, unibody design with solid build quality and nifty features, like a card reader and two USB-C ports.

Users looking for distinctive styling might consider Alienware’s M15 R6. It uses the company’s Legend design language and forgoes the all-black exterior of the other laptops mentioned so far. Instead, theM15 R6 goes for a black and grey mix with orange accents.

The M15 R6 isn’t just about looks and offers performance to rival the Blade 15. Both laptops use the Nvidia RTX 3070 GPU to deliver QHD 1440p resolution. They also both include 16GB RAM. An area where the M15 R6 excels is its use of the latest-gen Intel i711800H processor. Another stand-out feature of the M15 R6 is the option to include Cherry MX mechanical keys.

Like most Alienware products, the M15 R6 is pricey. Despite its price, it’s still worth it for its stylish looks, fast processor, and mechanical keys. The RTX 3070 is also a capable GPU, and it will be a long while before it’s out of date.

The MSI GS75 Stealth is considerably more affordable than the previously mentioned laptops, and yet it has a bigger 17.3-inch full HD 1080p screen instead of a 15.6-inch version. One of the ways MSI keeps the price down is by using the previous-gen Nvidia RTX 2060 GPU. This GPU uses Nvidia’s older Turing architecture and comes with 6GB GDDR6 RAM.

Considering its mid-range pricing, it’s no surprise that the GS75 Stealth doesn’t use the latest-gen processor. Like the Blade 15, it comes with Intel’s i7-10875H processor and 16GB RAM. Having a small 512GB SSD is disappointing considering the price, and most users will either need to upgrade it or buy an external storage device.

While the GS75 Stealth can’t match the performance of its top-tier rivals, it can still handle most games easily and offers reasonable mid-range value.

Acer’s Predator Triton 300 sits in the same price range as the GS75 Stealth and has comparable performance. Both laptops come with 16GB RAM and a 512GB SSD. They also use Intel 10th Gen processors, but the Predator Triton 300 has the lower-spec i7-10750H operating at 2.6GHz.

It may be challenging to choose between the MSI GS75 Stealth and the Predator Triton 300 because of their similarities. For most users, the deciding factor will be whether they prefer the larger screen on the MSI or the better GPU on the Acer.

Buyers who find the 512GB storage on the Predator Triton 300 and GS75 Stealth inadequate might prefer the Asus ROG Strix G15 G512LW. While this laptop shares many performance specs with the previous two options, it has four times the storage capacity with a 2TB SSD.

While the ROG Strix G15 offers similar performance to the previous two options on this list, it’s more expensive because it has more storage space. Having more space is generally worth the extra cash and saves users from future upgrades or buying an external drive.

Buyers looking to stretch their budget and get a high-performance GPU for an affordable price might consider Gigabyte’s G5. This laptop has mid-range pricing like the ROG Strix G15, Predator Triton 300, and GS75 Stealth, but it has a current-gen GPU. It uses the latest-gen RTX 3060 linked to a 15.6-inch full HD 1080p screen.

To keep the price of the G5 down, Gigabyte uses a lower-spec processor than its rivals on this list. Instead of an i7, it uses an i5 10500H, which hasn’t got the same performance. The rest of the specs, including 16GB RAM and 515GB SSD, are expected at its price point.

Considering its high-performance GPU, the G5 is a worthwhile option for gaming. On the other hand, the GPU comes at the cost of processing power, and it’s up to users to decide whether they’re willing to make that sacrifice.

There are also some budget-friendly laptops with a 240Hz refresh rate. Lenovo’s Legion 5 15 is more affordably priced than any of the laptops mentioned so far, but it has its drawbacks. It uses Nvidia’s RTX 3050i GPU that’s exclusive to laptops and doesn’t come close to the performance of the larger 30 Series cards. This entry-level GPU only has 4GB GDDR6 and sits below the RTX 2060 found in the GS75 Stealth.

Despite its GPU, the Legion 5 15 still performs well in other areas. The AMD Ryzen 7 5800H is a powerful processor that can rival Intel’s i7 offerings while being more efficient and using less power. Other specs like the 512GB NVMe SSD and 16GB RAM match most of the mid-range options on this list.

Budget laptops always require some compromise, and the Legion 5 15 is no different. While its GPU might not match the higher-end laptops on this list, the processor and RAM are acceptable. Considering its low price, the Legion 5 15 offers reasonable value and is worth it for buyers looking for a 240Hz laptop on a budget.

Asus’ TUF line is synonymous with affordable gaming products. The Dash 15 laptop uses a similar RTX 3050 GPU to the Legion 5 15, but it’s the TI version with slightly lower performance. Like the Legion 5 15, the Dash 15 has a 15.6-inch screen with full HD 1080p resolution.

As one of Asus’s latest offerings, the Dash 15 has some modern elements, but some of its specs can’t compete with the other laptops listed here. It uses Intel’s latest i7-11370H processor but is let down by only having 8GB RAM. The 512GB SSD is expected at such a low price and shouldn’t concern most buyers.

While the Dash 15 isn’t in the same league as the top-tier picks, it cost less than half the price. It offers the latest-generation technology and decent gaming performance for budget-conscious buyers.