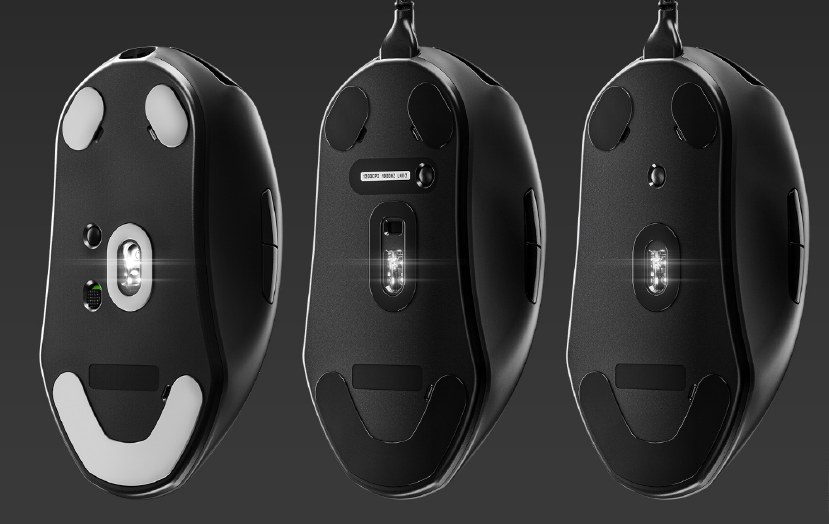 SteelSeries dropped the Prime line hot on the heels of the successful Rival 5 launch. While releasing an entirely new line of gaming mice immediately after one of the biggest mouse releases of this year seems counterintuitive, the three mice under the new Prime moniker focus solely on no-frills performance and provide a much different experience than the highly flexible Rival 5.

Each Prime model is slightly different from the other, but all share the same ergonomic shape. Both the Prime and the Prime+ are wired, but the Prime+ uses an OLED screen to customize settings. The Prime Wireless, as its name suggests, is a wireless version of the Prime.

While each model retains the same shape and streamlined focus, the value presented by each varies depending on personal preference.

The Prime line uses a right-handed ergonomic shape with little to no flair. With its singular goal being performance, there’s not much to the design of the Prime line. The shape lends itself well to a palm grip but is also comfortable with a claw grip. Using a fingertip grip here wasn’t very comfortable for our reviewer, especially since the Xtrfy MZ1-Zy’s Rail recently spoiled them regarding fingertip grip comfort.

A minor but important detail on the Prime mice is the mouse button design. Both the mouse one and two buttons feature soft edges toward the front of the buttons. This waterfall-like effect makes maintaining or regaining control of your mouse a cinch. The button design adds comfort and control to the experience if you’re using a deep palm grip. If you’re not using a deeper palm grip, you likely won’t notice this design feature.

Another grip-strengthening feature is the matte black textured coating. SteelSeries knocked the finish of the Prime line out of the park. It’s probably as close to moisture-wicking as you can get with a peripheral. The Prime coating does an excellent job of repelling oil and preventing fingerprints.

The minimal RGB on the scroll wheel indicates CPI setting on each mouse, and that’s about it. Despite the minimal flair, SteelSeries did a great job with the RGB scroll wheel. When glowing the stock orange color, the scroll wheel looks like something out of The Division. Colors used to indicate CPI steps are also surprisingly vivid. The SteelSeries logo is placed low on the hump and doesn’t light up.

Like a BenQ/Zowie mouse, the Prime shape is simple and straightforward. The closest comparison is probably Zowie’s EC1 mouse, which measures a few millimeters wider, longer, and taller. If you’ve been curious about an alternative to the no-frills design of a Zowie mouse, the Prime line might fill the void.

For reference, our reviewer’s right hand measures 7.7 inches (195.58mm) in length and 4.1 inches (104.14mm) in width, categorizing their hand within the medium to large range.

SteelSeries Prestige optical magnetic (OM) switches offer a somewhat new experience. While performance feels more or less the same, Prestige OM switches have a louder sound that is drastically different from SteelSeries’ own Rival 5 mouse. These switches have more of a snapping sound to them. The snap isn’t harsh, but it’s louder than the Rival 5 while the actuation has a softer physical feel. The auditory and physical feedback don’t match up, which may bother users who are more particular than others about their mouse clicks matching their noise.

The Prestige OM switches use a combination of optical actuation and magnetic tension to avoid metal-on-metal contact that degrades switches over time. Because of this design, SteelSeries’ Prestige switches have a rating of 100 million clicks. For reference, that’s 30 million more clicks than Razer’s optical switches and 80 million more than the Omron switches used in the Logitech G Pro Superlight X. You’ll likely never reach any of those benchmark figures, but SteelSeries’ Prestige switches should maintain a consistent feel for longer than its competitors since there’s no metal-on-metal contact.

Side buttons on each Prime mouse are a little sharper but quieter than the mouse one and two buttons. The minimal noise matches the slender button shape. Despite their wispy design, the side buttons are easily accessible, and both are clearly defined. There’s no real chance of misclicking here unless it’s 100-percent user error.

These are good, but they can be better

The feet and cables used for the Prime line are fine. Like the Rival 5, the detachable Super Mesh cable is a bit stiff out of the box, and the feet seem to favor control over speed. The slightly slower mouse feet are easily forgiven and can even be a strength to the right type of player. But the stiff cable doesn’t feel like it lives up to the rest of the Prime design.

Favoring control isn’t an inherently bad characteristic, but these feet don’t quite feel contemporary. Many competitive gaming mice use similar mouse feet but feature more glide. It could be the smaller feet SteelSeries uses on its mice, but something feels decidedly more sluggish. The slower glide does offer more control, so this is less of a criticism and more of a personal preference. The added control is especially helpful when lining up long-distance shots.

Having a slightly stiffer cable also slows the experience down. The Super Mesh cable takes a little too long to break in, and even after hours of use, it doesn’t feel as flexible as some competitors’ cables do out of the box. SteelSeries mitigates some of the drag by angling the mouse cable upward, but there’s a little too much drag at times. A bungee would likely fix this issue.

The base Prime model is as barebones as they come. This mouse boasts no needless features and provides the user with a reliable, battle-ready mouse. There’s nothing to the Prime, and that’s a compliment. Some streamlined gaming mice feel like they’re missing features, but that’s not the case with the base Prime mouse. Instead, it feels like a well-rounded, thoughtful design.

Weighing in at 69 grams, the Prime maintains an impressive weight, but its feet let it down if you’re accustomed to speed. The blend of lightweight design and slightly slower feet make the Prime feel like it favors control over anything else. Again, not a bad thing if you’re the right player.

SteelSeries loads the Prime with a TrueMove Pro optical sensor capable of up to 18,000 CPI. This sensor has a tracking speed of 450 IPS with 50G acceleration, placing the TrueMove Pro up there with its peers. As it goes with most modern mice, the TrueMove Pro kept up the pace across several competitive titles.

Having little to no onboard customization aside from the CPI adjustment button means you’ll have to dial in settings using SteelSeries’ Engine software. Depending on the type of player you are, this might be annoying at first. SteelSeries software is about as user-friendly as it gets, though.

Moving down the line, the Prime+ defines itself with an under-mounted OLED screen. SteelSeries fans will recognize the OLED screen from the brand’s Apex Pro keyboard. Every setting is adjusted using the OLED screen. Users can switch the polling rate, CPI, lift-off distance (LOD), and lighting brightness using the CPI button, mouse buttons, and scroll wheel.

Aside from the OLED screen, the Prime+ differs from the standard Prime by using the TrueMove Pro+ sensor. This sensor is more or less the same as the TrueMove Pro sensor but features an adjustable LOD. Users still get the 18,000 CPI capability with a tracking speed of 450 IPS and 50G acceleration but have the added LOD freedom.

The Prime+ gains a slight weight penalty for the inclusion of the OLED panel and sensor but not by much. Weighing 71 grams, the Prime+ is only a few grams heavier than the Prime. This difference is negligible and doesn’t hurt the mouse’s performance. That said, the feet still feel like they’re slowing the experience down. The added control is helpful when sniping, but there will be an adjustment period if you’re used to more glide.

The final iteration of the Prime mouse is the Prime Wireless. This model uses the TrueMove Air sensor featuring up to 18,000 CPI, a tracking speed of 400 IPS, and 40G acceleration. While these specs sound slightly weaker, there was no discernable difference in performance linked to the sensor.

SteelSeries’ Prime Wireless is easily the weakest in the litter for a couple of reasons. Being the heaviest mouse in the Prime line puts the Prime Wireless at a noticeable disadvantage. At 80 grams, this mouse feels significantly different in-game than the other Prime mice. The added weight is more distracting than the Super Mesh cable drag, and the feet can’t carry the weight as effectively as the other models.

Despite having a tough time fitting in, SteelSeries masterfully distributed the weight across the Prime Wireless. There’s no extra drag in any specific area. The mouse just feels much heavier when compared to its wired siblings.

Which one is for you?

SteelSeries Prime gaming mice each have their own strengths and weaknesses. Deciding which mouse is best for you will likely come down to what you value most in a gaming mouse. Are you the type of player who values plug-and-play design, customization, or wireless freedom?

The Prime will suit you best if you’re the kind of player that just wants to jump into the action. Users can customize CPI values in SteelSeries Engine, but there’s nothing to this mouse beyond that.

If you’re into dialing in your settings, the Prime+ will be more your speed at the cost of a few grams of weight. The under-mounted OLED screen makes it convenient and straightforward to customize your settings without going into any software. Users also get the freedom to adjust their lift-off distance, which isn’t available on the other Prime models.

Ultimately, the Prime gaming mice line does a phenomenal job streamlining the competitive gaming mouse. SteelSeries created two very worthy challengers with the Prime and Prime+. The Prime Wireless barely misses out on an easy recommendation because its weight doesn’t feel like it belongs in this line. Despite its focus on pared-down performance, the Prime line has a lot to offer competitive players looking for a “no-B.S.” experience.