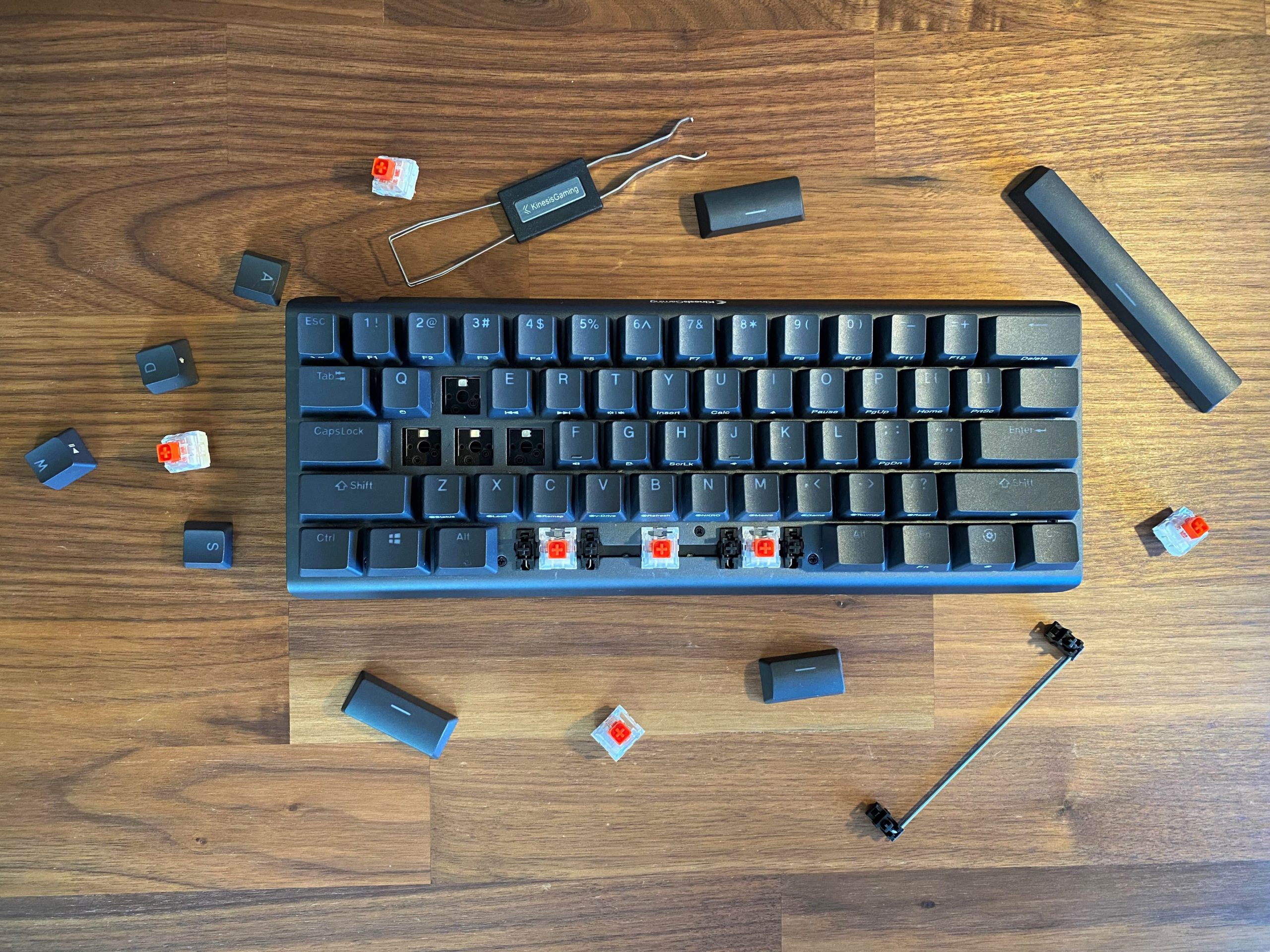 Kinesis Gaming has yet to find the same name-brand success of its parent company, Kinesis, which is widely known for its ergonomic keyboards. While the brand received praise with its Freestyle Edge RGB split keyboard among ergonomic-minded enthusiasts, it has yet to fully extend its reach to the wider gaming community. But Kinesis Gaming is looking to carve out a spot for itself in the peripherals market with the release of the TKO Tournament Keyboard.

The TKO is a 60 percent keyboard similar in form to the HyperX Alloy Origins 60 and Razer Huntsman Mini. It makes sense that an ergonomic-focused brand like Kinesis Gaming would choose a 60 percent form factor for its tournament keyboard since the smaller form can help reduce arm and shoulder strain by keeping both arms in a more natural position. But the small form factor is far from this keyboard’s most ergonomic feature.

After launching the TKO and partnering with the Overwatch League’s San Francisco Shock in February, Kinesis Gaming looks primed to have a great year within the esports community.

The TKO crushes all expectations regarding adjustability, thanks to its unusual amount of flip-up feet. Our reviewer generally praises keyboards with flip-up feet because they allow users to choose between three different typing angles. Kinesis Gaming’s TKO features four additional feet compared to other keyboards. Four flip-up feet are the norm on more comfortable keyboards like the Alloy Origins 60 or Ducky One 2 Mini. The standard four feet provide two different typing angles, in addition to the baseline typing angle. The TKO’s eight flip-up feet seem like overkill at first, but these aren’t your regular keyboard feet. Kinesis Gaming brought its ergonomic roots to this keyboard by providing users the option for right and left-handed tenting.

Tenting essentially puts one side of the keyboard on a slope that resembles a tent. While this feature is commonly seen on full-size, split keyboards like the Freestyle Edge RGB, seeing tenting on a 60 percent board is rare—if not unheard of—as of this article’s publication. Our reviewer first thought it was a gimmick, but they were quickly proven wrong. 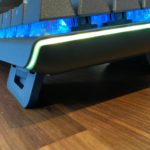 The left-handed tenting provided our reviewer with some of the most comfortable gaming sessions they’ve ever experienced. The space bar felt like less of a reach, and the Ctrl key felt slightly less cumbersome to reach. These may sound like small things, but the difference in comfort and strain was noticeable throughout an entire evening of Overwatch.

Another ergonomic feature is the ability to use a negative typing angle. Buyers can use the flip-up feet underneath the side of the keyboard closest to them to create a downward sloping typing angle. Our reviewer didn’t find this to provide much comfort when using their go-to keybinds, but when they moved Ctrl over to one of the HyperSpace keys, this angle became much more viable.

The surprising utility of HyperSpace keys

The HyperSpace keys—more commonly known as a split space bar—are another seldomly seen feature on prebuilt keyboards. This feature splits the space bar into three separate keys. The keys on the left and right have stabilizers, as you’d typically see on the right Shift key and Enter key, while the middle HyperSpace key does not. This is another feature that looks gimmicky at first, but it makes the negative tilt function viable.

For users who aren’t sold on the HyperSpace keys, Kinesis Gaming includes a traditional space bar and plate-mounted stabilizer. The process of swapping out stabilizers might take a minute to get used to if you’ve never tinkered with your keyboard before. For those who have the experience, the process is near effortless. The swappable HyperSpace keys, space bar, and stabilizers add to the list of features unique to the TKO.

Kailh Box switches are used as the stock switch in the TKO. The company offers buyers a choice between linear Kailh Box Reds, clicky Kailh Box Whites, or tactile Kailh Box Browns. Our reviewer’s copy came loaded with Kailh Box Reds, which have an activation point of 1.8 millimeters and require 50 grams of force to operate.

For those curious about the other switch varieties offer, the Kailh Box Browns and Kailh Box Whites have the same activation point as the Reds. But the Brown switches require 10 more grams of operating force to reach the activation point than both the Reds and Whites.

There’s an added value in being able to swap out switches since you won’t have to buy a new keyboard to try out a new switch type. Hot-swappable keyboards are becoming more commonplace, and Kinesis Gaming’s choice to go this route instills a lot of good faith in the company.

Kinesis Gaming’s TKO Tournament Keyboard has a set of convenience-oriented features that help justify the relatively high price tag. The most impressive of these features is the inclusion of a hard-shell travel case. Kinesis Gamings’ inclusion of a case is a rare sight to see and made traveling with the keyboard far easier than any other product our reviewer has tested so far. The included travel case has a large pocket for storage and a dedicated slot for cable storage.

The USB-C cable is another feature that makes this keyboard a great option for people who travel frequently. Detachable USB-C cables are pretty much the norm on 60 percent keyboards, but they’re always appreciated. The addition of a USB-C cable paints Kinesis Gaming as a forward-thinking company with gamers’ wants and needs in mind.

A bit bland at first glance

An area where the TKO falls short is in the aesthetics department. The keyboard is just a bit too grey. It’s visually striking in other ways, but at first glance, it’s underwhelming. The aluminum top plate has a bit of a blue tint to it at certain angles, but the keycaps particularly take away from the overall appearance of the board.

Having double-shot PBT keycaps is always a plus because of their durability, but these look washed out. The TKO’s keycaps look like they’re a bit faded already. There also looks to be some kind of bubbling within the legends. These are not massive flaws, but you’ll likely want to keep the RGB lighting on if you’re a more aesthetically-minded gamer.

The TKO’s two-zone RGB lighting is its saving grace when it comes to appearance. Similar to the Huntsman Analog V2, the TKO features a backlit keyboard and an additional strip of RGB lighting around the edges. When active, the edge lighting creates a neat underglow effect. Both zones are fully customizable through the SmartSet App.

Kinesis Gaming allows users to customize up to nine profiles and store them on the board. Users can do this through the SmartSet App, but the software isn’t as straightforward as other companies’.

There’s an order of operations when customizing the TKO. First, you’ll need to unlock the v-Drive on the keyboard by pressing the SmartSet key, right Shift key, and V simultaneously. After unlocking the v-Drive, users will be able to open up the SmartSet App to customize macros, lighting profiles, and HyperSpace keybinds. Once the board is customized, hit the save icon to display your new changes, then disable the v-Drive by pressing the SmartSet key, right Shift, and V simultaneously.

It’s not the most difficult process to get through, but it’s not as convenient as something like Logitech’s G-HUB or Razer’s Synapse software. The learning curve of the SmartSet Engine is more of a trade-off than it is an outright negative since the TKO is 100 percent driverless. Kinesis Gaming also designed the board to emphasize onboard programming, so there’s a bit more flexibility in how users choose to program their keyboard.

Kinesis Gaming’s TKO Tournament Keyboard is a strange and unique beast. It carries over the company’s ergonomic roots to great success and has plenty of forward-thinking features like a hot-swappable PCB and a detachable USB-C cable. This keyboard even comes with a travel case. All of these bells and whistles come at a high price, however.

Coming in well over the price of competing products is an unavoidable pitfall of a package like the TKO. Considering the TKO’s larger-than-average feature set and supreme ergonomics, it stretches your dollar a bit farther than most keyboards in its class. There’s nothing else like it on the market.

If you’re someone who struggles with wrist strain and wants to try something new, the TKO is a great place to start. Even if you’re not experiencing any wrist pain but like the idea of a 60 percent keyboard with tenting, this product is worth a shot.