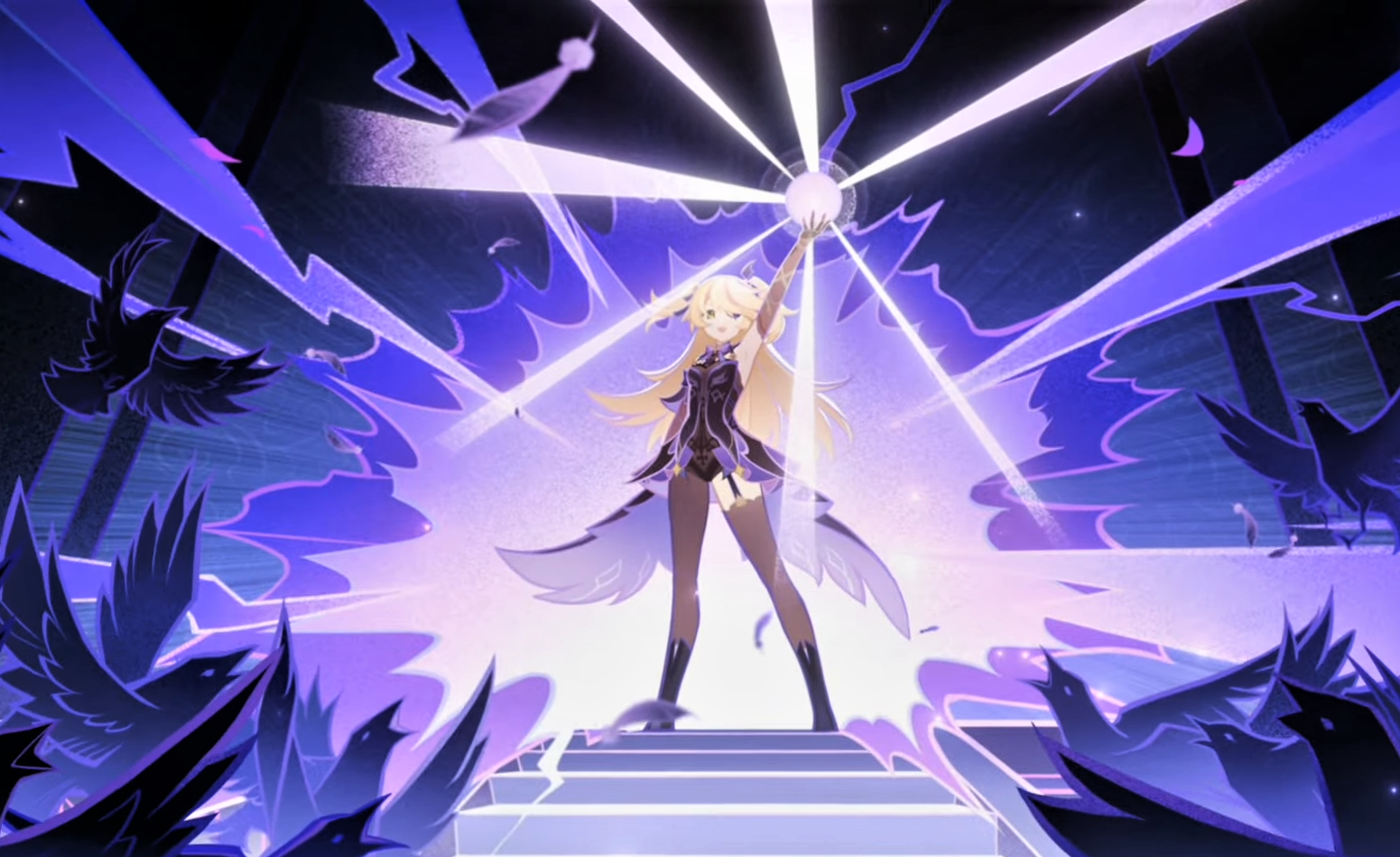 Four-star Electro Bow character Fischl in Genshin Impact is an investigator for Mondstadt’s Adventurers’ Guild and boasts a dramatic and unique persona. She is always accompanied by the night raven Oz, who is both Fischl’s familiar as well as her companion.

Fischl is all around very eccentric and unpredictable, but works hard and utilizes her unique personality to find success. She has succeeded greatly within the Adventurers’ Guild and has thus risen in ranks quite quickly.

Fischl grew up with many fantasy stories, which are the source of her unique title and demeanor. She pretends to be a kind princess and treats all she comes into contact with formally, amiably, and with the utmost of proper manners.

Her speech is often times so formal that those she interacts with have a hard time understanding her, but luckily Oz is there to help translate what she is trying to say.

Oz is also very trusting of Fischl and her unique intuition because he understands her better than anyone else. He sometimes comes off as protective as he always asks others to hear Fischl’s ideas out because he knows that as wild or weird as they may seem, she is almost always right.

Due to her eccentric personality, unique design, interesting personality, and powerful Electro skillset, Fischl is easily one of the best four-star characters. However, building Fischl right is an essential aspect of making her function well and players thus need to choose how they build the Genshin Impact character carefully.

Fischl will function best as the secondary damage dealer and is one of the best characters players can build for this role. This means players should place emphasis on building her for this role when choosing which weapon to equip her with.

This five-star bow is one of the best options for Fischl. The “Daylight’s Augury” ability of this bow increases elemental burst and elemental skill damage by 12 percent.

After the wielder of this bow utilizes an elemental burst, elemental skill, normal attack, or charged attack that hits an opponent, that character will then gain one stack of Ashen Nightstar for the next 12 seconds. Each stack will then increase attack by a varying percentage and is calculated separately from the others.

The “Echoing Ballad” ability of this five-star weapon increases all critical rate damage the wielder deals by 20 percent. Every hit made with this bow also has a 60 percent chance to cause an area of effect attack that deals 125 percent physical attack damage. This ability can occur once every four seconds.

This five-star bow has “The Cleansing Form” ability that increases the wielder’s health points by 16 percent. It also causes the damage dealt by the wielder of this bow to increase by 20 percent when there are enemies close by regardless of if the character is currently the one who is active on the battlefield or not.

Four-star bow Rust is a great choice to increase Fischl’s damage output. The “Rapid Firing” ability of this weapon increases normal attack damage by 40 percent at the cost of decreasing charged shot damage by 10 percent. Charged bow shots can be powerful, but they are generally quite difficult to use in direct combat which means this trade-off is quite worth it.

Another solid four-star bow for Fischl is The Stringless. The “Arrowless Song” ability of this weapon is simple, but effective, and increases the wielder’s elemental skill and elemental burst damage by 24 percent.

Choosing the right Artifacts is an essential element of Fischl’s success on the battlefield. Generally, players should equip the Electro character with Artifacts that will increase her damage output and thus amplify her abilities as a secondary damage dealer.

Generally, the best Artifact Set for Fischl is the full four-piece Pale Flame set. The two-piece set will increase the physical damage she deals by 25 percent.

Another great set for Fischl, in either the two or four-piece set varieties, is Thundering Fury. The two-piece set grants the character it is equipped to a 15 percent Electro damage bonus.

The four-piece set increases all damage dealt by the Superconduct, Overloaded, and Electro-Charged elemental reactions by 40 percent. Activating any of these effects with this set equipped will also decrease the elemental skill cooldown by one second and can occur once every 0.8 seconds.

Players looking to increase Fischl’s attack may like the Gladiator’s Finale set, but they should only equip Fischl with the two-piece set of Gladiator’s Finale. This is because the effects of the full four-piece set only work on characters who wield a sword, claymore, or polearm.

Equipping the two-piece set grants the character it is equipped to an 18 percent attack bonus. This set is a great one to pair with Thundering Fury.

Because Fischl is among the early game characters released in Genshin, all resources players will need to gather for her are very easy ones to attain. Arrowheads can be obtained from Hilichurl Shooters, which go down after a few hits, and Small Lamp Grass is a Mondstadt local specialty easily found all around the area but especially in Whispering Woods.

The most difficult material for players to gather will be Lightning Prism from the Electro Hypostasis, but this boss is quite easy to beat for any player who has at least minimal Genshin experience.

Thus, raising Fischl’s Ascension level should mostly be a breeze.

Luckily, these massive numbers can be broken down across each Ascension level which means that players can take as long as they need to gather the required resources.

As is the case with Fischl’s Ascension Materials, her Talent Materials too are quite easy to gather with one of the main ones, Arrowheads from Hilichurl Shooters, also being required here. All levels of Teachings of Ballad that are required for Fischl can be obtained by players from the Forsaken Rift Domain on Sundays, Wednesdays, and Saturdays.

Spirit Locket of Boreas may be a bit difficult for players to attain because taking on Andrius, the Dominator of Wolves, in the Wolf of the North Challenge can be hard when players are attempting to do so alone.

Taking on this Genshin challenge with friends or other Travelers makes the task much more doable and thus is highly recommended.

To raise all of Fischl’s talents to the highest level, players will need a total of 1,652,500 Mora, three Teachings of Ballad, 21 Guide to Ballad, 38 Philosophies of Ballad, six Firm Arrowhead, 22 Sharp Arrowhead, 31 Weathered Arrowhead, one Crown of Insight, and six Spirt Locket of Boreas.