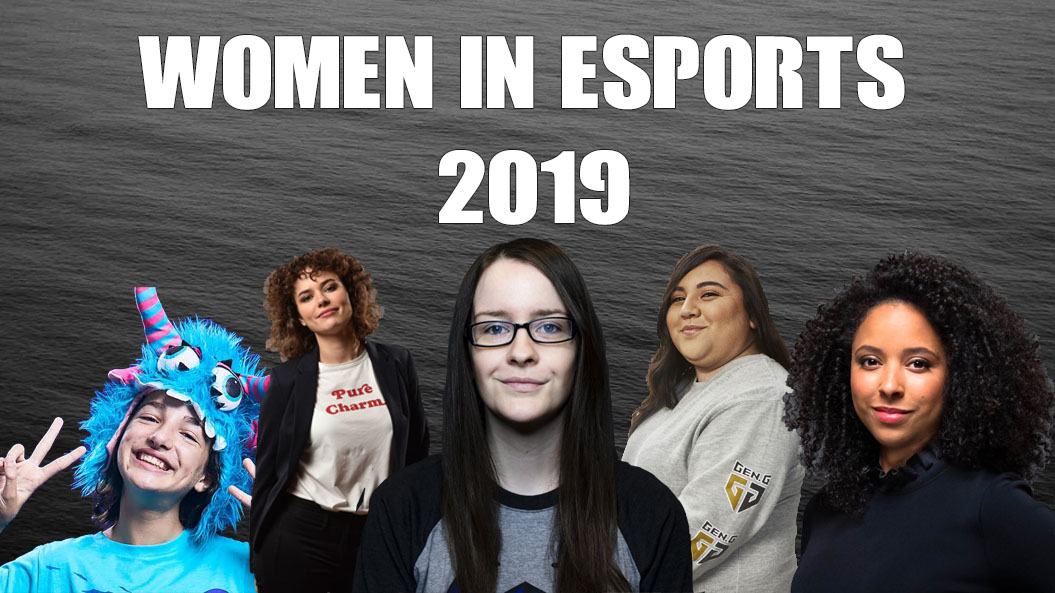 Women in esports were able to help create storylines and begin the journey to successful careers in an industry that’s infamously hostile to women. Riot Games recently settled a lawsuit filed against it from female employees claiming gender discrimination and sexual harassment. Individuals had been previously handed fines and suspensions, but 2019 was the first time in esports that a company was fully held responsible for its actions toward women.

It’s easy to highlight the bad in esports, but we should be focusing on the good. Women have been able to use their positions to create industry-first collaborations, like Gen.G’s partnership with Bumble that aided in the creation of the Gen.G Bumble female Fortnite team, the first all-female team in the battle royale.

Women behind the scenes, like Stephanie “Missharvey” Harvey, have been involved in the industry for over 15 years. She started her career in 2003 as a professional CS:GO athlete and has since grown to represent CLG as the org’s director of esports franchise development and outreach.

These are the type of women who have helped support the industry and are paving the way for the next wave of people interested in making esports their home.

TINARAES was the first player to sign to Gen.G’s Fortnite team in October 2018, which eventually rebranded to the Gen.G Bumble female Fortnite team. Almost a year later in September, she used the tools provided by Gen.G and Bumble, like the organization’s new Los Angeles facility, private chefs, and coaching, to earn $42,000 and a first-place finish at TwitchCon 2019 with her assigned teammates. There hasn’t been a Fortnite event won by a woman since TINARAES’s win.

“Being the first female to win a Fortnite LAN was a bit overwhelming but also very relieving,” TINARAES said. “Most of the time male players don’t see us as equal so now having a championship behind me helped open some eyes for not only those players but new and aspiring women who want to compete as well. Ever since [Kristen “KittyPlays” Michaela] told us to picture ourselves on stage holding the trophy and winning I’ve always had this image of what I want and will accomplish so having this image in my head come to life was absolutely incredible.”

“I want to say for all the girls out there who have a dream for esports competition, for glory, if you want to do it and you believe in yourself you should just forget your gender and go for it, “VKLiooon said during the Hearthstone Global Championship.

Disclaimer: Mueller was the managing editor at Dot Esports until February 2019.

In 2018, Mueller founded Women of Esports to provide support and resources for women working in the industry and to others seeking opportunities. The mentorship group has over 450 members and offers several opportunities to learn from mentors from the industry, including Ryan Garfat, former senior editor for ESPN Esports, Bryce Blum, founding partner of ESG Law, and Cassandra Reynoso, associate PR manager for Blizzard Entertainment. There are mentors for people interested in learning more about casting, content management, media, public relations, law, competitive players, and more.

“This has been a year of massive change for me, with a very steep learning curve,” Mueller said. “While I didn’t get as much underway as I would have liked this year, just building up the Women of Esports community to what it is today has been quite the achievement—something that wouldn’t be possible without the help of the WoE admin team.”

Fans in the Call of Duty industry will recognize MiDNiTe from her time as a content creator with OpTic Gaming, but she was able to use her experience to find a new home. In August, she announced that she’d be working with Minnesota RØKKR, a new Call of Duty team owned by WISE Ventures Esports. In a few months, she was officially titled the director of content for the organization as it heads into its first year of the recently franchised Call of Duty League. With her role and leadership, she’s been able to efficiently guide the organization to communicate with the RØKKR community through podcasts, Reddit AMAs, in-depth player profile videos, and more.

There are a handful of female teams in CS:GO, but Dignitas’ squad proved to be at the top in 2019. As the only organization invited to Intel Challenge Katowice, Emmalee “EMUHLEET” Garrido, Lynnie “artStar” Noquez, Amanda “rain” Smith, Kiara “milk” Makua, and Catherine “CAth” Leroux defended their win in March with a clean 2-0 victory over CLG Red.

Ewok first exploded into internet popularity when the deaf content creator was hosted by Tim “TimTheTatman” Betar in March. One generous host and a few hours later, she jumped from less than 1,000 followers to 10,000 on Twitch. She was able to further transform her online momentum into physical results in July when she appeared at the Fortnite World Cup.

In New York City, she revealed to the world and to her new teammates that she’d be the first female player signed by FaZe Clan. November marked the biggest move in her content creation career with an announcement that she signed an exclusivity deal with Microsoft’s Mixer. To top the year off with a cherry, Ewok became the youngest person to earn a spot on Forbes’ 30 under 30 in Gaming for 2020.

“My favorite accomplishment of 2019 is becoming a professional deaf girl player for FaZe Clan, the largest esports organization in the world,” Ewok said. “I became their first female player on the team in July 2019. I was happy to show Faze when I joined that girls can do just as well as boys.”

Missharvey’s esports history spans all the way back to 2003 with Counter-Strike 1.5. A year later, she started her first team, the Canadian Divas. The past year marked one of her last years as a professional player with a third-place finish at the 2018 World Electronic Sports Games Female event under Those Damn Canadians. The team that won the event, CLG Red, is the same organization she won ESWC 2015 with.

Her storyline with CLG seemed destined to continue, though. In November, she joined the organization in a position that was created specifically for her. Her new position as director of esports franchise development and outreach for CLG allows her to work toward supporting minorities and diversity in the esports community.

“My favorite accomplishment of 2019 has definitely been taking into action a lot of the projects I always wanted to do,” MissHarvey said. “With the help of other women in the industry, I was able to launch my first LIFT 1UP event, worked with the International Olympic Committee (IOC) to help the discussions between esports and sports, representing players around the world, and finally took on my dream job at CLG, a role custom made for all the initiatives I want to start and lead to make our gaming communities a better and safer place.”

Evil Geniuses underwent massive changes in May 2019 when the investment firm PEAK6 acquired the organization for an undisclosed amount. Jameson took on the role of CEO after working with PEAK6’s Strategic Capital division.

The 25-year-old used her role to focus on securing new partnerships and to reignite the passion behind the organization. Within her first year, Jameson helped EG return to CS:GO and League of Legends. EG acquired NRG Esports’ CS:GO roster and won ESL One: New York in September, making sure their resurgence in esports was noticed. She finished 2019 by landing on the Forbes’ 30 under 30 in Gaming for 2020.

This bubbly British host first started as a producer with the BBC but discovered that her passion for video games could turn into a career at the 2015 League World Qualifiers at Wembley’s Arena. Ward then took a producing position with Twitch Studios under Marcus “DJWheat” Graham where she slowly began her transition to hosting. Fast forward a few years and 2019 was an inexplicably busy year for Ward. She worked nine out of 12 months acting as a desk host, interviewer, or reporter for CS:GO or PUBG. Most notably, she was the main interviewer for Intel Extreme Masters Katowice in March 2019.

“Interviewing at the Intel Extreme Master Katowice CS:GO Major Championship was a dream come true and led to a further 18 CS events in 2019,” Ward said. “It’s a privilege to cover such an established esport, getting to work with talented broadcasters and iconic teams.”