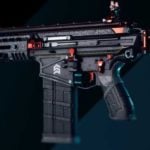 Just like how it’s in MOBAs and MMORPGs, keeping up with the meta is important to retain your edge in shooter games.

Battlefield 2042’s massive maps allow players to put their creativity to the test and devise new strategies to engage enemies. No matter how you decide to play a certain map, however, there will be times when you’ll need to outplay an opponent when you’re outnumbered to stay in the match. To do this without breaking a sweat, you’ll need a decent aim, and pairing it with some of the best weapons in Battlefield 2042 will help your chances of getting the win.

Using the best weapons will give you an edge over enemies with less powerful weapons. You may not win every skirmish, of course, but you’ll be increasing your odds of surviving.

Here are the best weapons in Battlefield 2042.

It’s hard to go wrong with an assault rifle. They tend to be the most reliable weapon class in most shooter games, and they’re the best choice for variety in Battlefield 2042.

The M5A3 is one of the easiest weapons to control in Battlefield 2042. Its low recoil makes aiming it an easy task. You can even use a long-range scope with the weapon to make it more versatile. While it won’t be as effective as a sniper rifle for long-distance kills, you can still take down a few players from afar.

When you’re diving into a building full of players, you’ll need to take out as many of them as possible before anyone can realize what’s going on, and a light machine gun will be perfect for that job.

The LCMG is one of the most powerful weapons in Battlefield 2042, and it can be used on several different occasions. With a steady aim, it can take down enemies from a distance and it’s a familiar pick for short-to-medium ranges.

Your loadout will be the key when it comes to deciding how you can use the LCMG in a match, and the overall variety of attachment choices for the weapon can let you catch enemy players off guard, even at medium-to-long distances.

The size of the maps in Battlefield 2042 allows players to take on different playstyles throughout a match. You can start off with a sniper rifle to cover some range, only to switch it to a close-range weapon to assist your team while taking control of an area.

The K30 SMG, also known as the KRISS Vector, features an impressive time-to-kill ratio with its high fire rate, making it one of the best choices for close-range combat. This weapon shreds through enemies from close distances, but you won’t have the same success rate at medium or long ranges.

The K30 is the submachine gun to go if you’re all about speed. Players who like SMGs but want slightly more control over their aim may like the PBX-45 better, though.

The PBX-45 has a lower recoil, but it comes at the cost of its fire rate. The trade-off usually shows its worth in medium-range combat since, unlike the K30, the PBX-45 can still pick off enemies from medium distances.

The AK-24 is a heavy-hitting assault rifle. Compared to other assault rifles, using the AK-24 can be slightly more difficult at first, mainly because of the gun’s recoil.

The AK-24’s high damage output comes with equally high recoil, meaning only players who can control the weapon can harness the best out of it. You can deck your loadout to help with the recoil, which will drastically improve the weapon’s use cases.

Even if you enjoy playing Battlefield 2042 in close-quarter combat setups, odds are you’ll occasionally need to pick up a sniper rifle just to take down that enemy sharpshooter who’s been picking your team apart.

Any headshot with the SWS-10 will one-shot your enemies, but be sure to have some back up close by in case you miss any of your shots. A teammate that can finish off enemies after a body shot or protect your back will make using the SWS-10 safer and easier.

The DM7 is an AR-style carbine. The semi-automatic weapon excels at long-range fights, but it can get outclassed by some of the other weapons on our list, like the LCMG.

Considering the weapon was designed for long-range, getting bested at its own game by an LMG is certainly not a good look. The weapon is relatively easier to use, however, and some players may feel more comfortable with it. If you aren’t planning on engaging any short-range fights, then the DM7 can be the better choice for prolonged medium-to-long range usage.