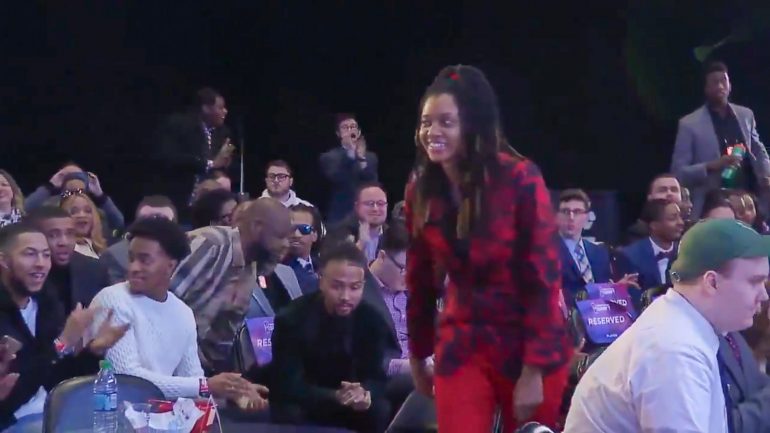 A huge cheer rang out over the Barclays Center when NBA 2K League General Manager Brendan Donohue announced that Chiquita Evans had been drafted by Warriors Gaming. The crowd was sparse by then—it was the fourth round of the 2019 2K League draft, and many of the players already selected had vacated their seats.

But it didn’t matter: Evans, who goes by the gamertag Chiquitae126, righfully drove some of the biggest cheers of the night as the first woman to be drafted to the 2K League. It was a groundbreaking move for both the nascent esports league as well as the broader competitive gaming industry.

When Chiquitae126 walked up to the stage with a beaming grin on her face and donned the Warriors Gaming hat, what she really did was grab a place in esports history. The industry’s relationship with women has long been fraught with controversy, from the dark days of Gamergate to ongoing issues at some of the biggest game developers.

But for one night, all of that is forgotten as Chiquitae126 proved that she belonged as one of the best 2K players in the world. Make no mistake—Warriors Gaming are a rebuilding squad in desperate search of talent. She’ll be counted on to play a big role in their quest to compete this year.

“I feel blessed,” Chiquitae126 said, choking up in her live interview after being drafted. “Whatever role the team needs me to be is what I’m going to be.”

It was especially notable that the ovation she got—which was the longest and most enthusiastic of the night—came in the fourth and last round of the draft. At that point, roster spots were filling up and some players remaining in the crowd would not get drafted at all. But they set all of that aside to cheer for a woman who had proven through her play that she was as good—or better—than them.

That’s the ultimate sign of respect, one that Chiquitae126 deserves completely.