Where to find the new Coral Castle, Atlantis POI in Fortnite | Dot Esports
Skip to content 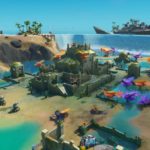 More than half of Fortnite’s map was buried underwater shortly after the device event, which ended in Chapter two, season two.

Epic Games has been rolling out weekly challenges since the beginning of the new season both as a way for players to grind Battle Pass XP and as a narrative for the storyline.

The water levels lowered once again earlier today, and a new point of interest (POI) resurfaced and opened its doors to players with great loot and magical architecture.

Despite looking very much like the Atlantis of anyone’s dreams, the landmark is actually called Coral Castle. The sandy area that’s filled with unique looking structures is called Atlantis, however.

This location is toward the north of Sweaty Sands, and you should get there in a matter of seconds if you start swimming north from the Sweaty Sands pier. Don’t worry about missing it since the landmark is enormous—at least as big as Pleasant Park.

The area is filled with loot and will possibly be crowded with competition in the upcoming days. The main building has only two floors, but you should still find a lot of ammunition and guns scattered around Coral Castle.

If you want to explore the area and have a good time with it, landing there in Team Rumble can be an excellent idea.

Coral Castle is also surrounded by waterfalls and high ground, giving it a canyon setup. This could set up intense end game fights with some players taking over Coral Castle and others trying to make their way from outside.

Though the new POI’s placement could look random at first, anyone who’s been grinding the secret quests may notice a pattern.

A new tribe named Coral Buddies asked the help of Fortnite players for the last couple of weeks to advance their small society into the wooden and stone age. The area of the map where Coral Castle surfaced falls into the territory of Coral Buddies.

Though Epic didn’t give any narrative about what Coral Buddies’ deal was, this could certainly be a part of their plan.