Manuel “Martoz” Martinez is a professional Fortnite player and a content creator from the Netherlands.

Breaking into the higher tiers of Fortnite is a challenging task. Not only do you need skill, you also need a certain level of consistency if you're looking to stay on top of the ranked ladder. Martos has been around since 2018, but he started gaining more traction in terms of popularity with his Arena content.

Farming 6,000 Arena points in a day seemed like not a big deal for Martoz, and he accumulated over 70,000 Arena points in less than a month around 2020. Reaching over one million subscribers on YouTube, Martoz almost never flinched under pressure. He always seems to find a way out of in-game situations that can be considered impossible to survive, and he owes most of his success to practice.

One of the fastest ways to improve through practice is having settings that you're comfortable with. This'll allow you to build your muscle memory more quickly, and your setup will start feeling natural as you keep hitting the practice grounds.

Considering professional and veteran players spend hours optimizing their settings, taking a look at Martoz's layout can help you kickstart your progression. Most of these settings are up to personal preference, so don't hesitate to make any changes you deem fit.

Martoz's sensitivity settings are considerably lower than most professional Fortnite players. They're still a far away from being actually slow, but they certainly offer more control over speed. While Martoz doesn't shy away from performing quick edits or building complex structures in seconds, you can notice there's a thought process behind almost all of his moves.

His slower-than-average sensitivity settings give him enough room to consider his options. Even if you prefer higher or lower sensitivity values, you'll always want to set your mouse's response rate to the highest available option. This will ensure the lowest input lag for your mouse, and it can make a difference in a game like Fortnite where even milliseconds matter.

Martoz recently changed his setup with a joystick. He still uses his mouse and keyboard, but he uses a joystick for his movement keys. Though it sounds odd at first, it works wonderfully to free up a major space on his keyboard. Due to the nature of "W-A-S-D" moving, players often dedicate three fingers to move their character around. You'll be pressing down one of the movement keys continuously compared to the others, meaning your stable finger will change depending on the situation.

A joystick allows Martoz to perform all the movement commands with his thumb, so he doesn't need to switch fingers to move to another side. With this change, Martoz moved his building keybinds to keys closer to the bottom left corner of his keyboard while still utilizing his mouse's side buttons. His keyboard's upper side is practically empty in terms of hotkeys since he can't reach them without letting go of his joystick.

If you don't have a joystick, Martoz's keybinds may feel too crowded when you also use the classic "W-A-S-D" setup to move your character.

Content creators and professional players usually use the latest hardware to play Fortnite in the most optimal conditions. While this type of hardware is more than powerful enough to run it with all the settings at their maximum values, it isn't that beneficial to do so.

If you have a high refresh rate monitor, you'll want to have as many frames as possible so you can unlock your screen's full potential. Martoz generally sets every setting to their lowest value, but he makes an exception for his View Distance. Setting View Distance to Epic generally helps players to spot loot llamas and vehicles from far away while landing onto the map, which is beneficial for high-ranked matches.

He also stretches his screen with a "1750 x 1080" resolution. While your game will look considerably worse with a stretched screen, your enemies will look slightly larger, making them easier to target. 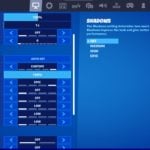