Chapter Two, season four of Fortnite became available for download today and features many familiar faces from the Marvel universe. Thor, Wolverine, Storm, Mystique, Groot, She-Hulk, and Doctor Doom are all making an appearance this season. The heroes will be going against Galactus, who’s planning to eat the Fortnite world. But they’ll have the help of Fortnite characters this time around.

Similar to previous seasons, a new battle pass is also up for purchase. A number of weekly challenges will be introduced as the season progresses to help players hit level 100. Almost all of the heroes will be available through the battle pass as skins and players will be able to unlock additional styles via Awakening Challenges.

You won’t be able to use the superhero cosmetic of your choice without completing the Awakening Challenges, though. Even unlocking the first Groot wearable has a prerequisite. Players will need to rescue Groot, who will currently be in his Sapling form, to unlock the back bling version of him that becomes available at battle pass level 32.

Where is Sapling Groot at Holly Hedge Nursery in Fortnite?

Despite being tiny in his sapling form, finding Groot is a lot easier than noticing the fireflies in Weeping Woods. You’ll need to jump to Holly Hedges and make your way to the shop-like building that’s located toward the south of the landmark.

Land outside and find the greenhouse or garden shop that’s behind the shop. There will be a dozen flower pots and Groot will be hiding in between one of them. Just smash through all of them until you find Groot if you can’t spot him since you can’t hurt him anyway. 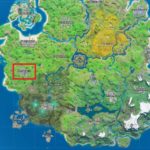 Once you locate Groot, go ahead and interact with him to rescue and unlock the Sapling Groot back bling item.

This challenge is the first of Groot’s Awakening Challenges. The second one unlocks a built-in emote named Battle-Brother. The emote features Groot’s trusty old friend Rocket Raccoon, who somewhat behaves like a pet. Rocket Raccoon will start following Groot around after using the emote for once. The emote can be used with all the skins available in your inventory, meaning Rocket Racoon can be your companion no matter the skin you choose to rock.

Make sure to check out Patch 14.00’s change logs so you can stay up-to-date with the metagame while rocking the latest skins.