Though most of the teasers were hard to read, the close-up image of a trident was enough to convince fans that either a certain Greek god or Aquaman was making his way to the game. Not only did it turn out to be DC’s Aquaman, but it’s also portrayed by Jason Momoa, the actor from the Aquaman movie and the hit TV series Game of Thrones.

This is a great thematic decision by Epic Games since the map is flooded this season and Aquaman is the perfect hero to help the agents.

Though Aquaman doesn’t come with his iconic superpowers, you can still feel like you’re the ruler of the seven seas while riding the new shark vehicles.

How to unlock the Aquaman skin in Fortnite 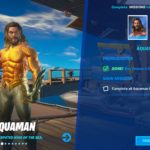 Just like the Deadpool skin from Chapter Two, season two, the Aquaman skin also requires players to do some questing to be unlocked. Despite the similarity, the Aquaman skin is already available during the first day of the new season and looks to have less demanding challenges than Deadpool.

There aren’t any challenges that can be done through the UI and they all seem to be in-game tasks that you can check through the mission table, which is now in the main menu.

To unlock the Aquaman skin, players will need to:

The first of the Aquaman challenges, “Use a Whirlpool at The Fortilla” is available right now and four other challenges will arrive in the upcoming weeks.

How to unlock the Arthur Curry Aquaman skin style

After completing the five Aquaman challenges, players will have full access to the skin’s base style. There’s a second style, however, which features the Aquaman we know from DC’s cinematic universe.

You’ll need to take a dive over the waterfall at Gorgeous Gorge while having your Aquaman skin equipped to unlock the shirtless Arthur Curry style.

We’ll be updating this article as more Aquaman missions get released.