Fortnite’s Red Strike Pack is now available in the Store

This is a great deal. 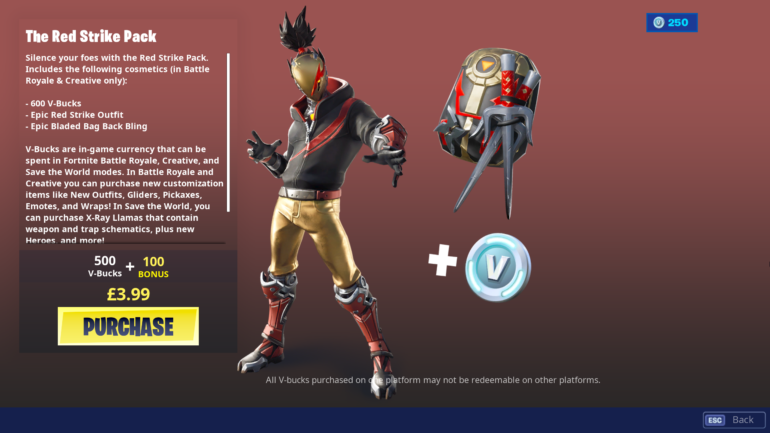 More cosmetic items have just arrived in Fortnite: Battle Royale’s season X at a special price for all players.

Epic Games has released the Red Strike Pack, which is similar to what the company used to call the Starter Packs. It costs $4.99 and comes with the Red Strike character outfit, the Bladed Bag back bling, and 600 V-Bucks. There are no special challenges to unlock additional styles for Red Strike.

Epic releases a new bundle like this every season. They’re generally worth your money considering the company charges $10 for 1,000 V-Bucks, so the Red Strike Pack already gives you a higher V-Buck value per dollar than that if you consider just the cash you get from buying it. But you still get two cosmetic items included in the price, which makes the Red Strike Pack the best deal for Fortnite players who want to buy V-Bucks and cosmetic items.

But this deal is gone once you buy it. Players can’t abuse the system to buy cheaper V-Bucks as many times as they want.

Previous Starter Packs came with similar deals. Epic always makes them so that you get about 600 V-Bucks and some cosmetic items, and some past bundles came with extra cosmetics such as a Wrap in the Laguna Pack.

Players should assume the Red Strike Pack will be available for a limited time. It’ll probably rotate out and be replaced by a new $5 pack next season. It should then become unavailable until Epic decides to bring it back to the Item Shop at a higher price.