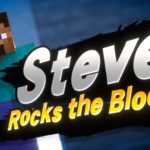 Masahiro Sakurai announced that the next fighter will be Steve from Minecraft. The reveal trailer also showed alternate skins for Steve in Alex and Zombie. But it’s still unknown when Steve will actually join the game.

With the ongoing worldwide COVID-19 pandemic, it’s understandable that the creation of Steve could have been impacted since that also happened with Min-Min. Unfortunately for fans of Minecraft, the next character coming with the second Fighter Pass still did not get his release date during the initial reveal.

However, during the “Mr. Sakurai presents Steve and Alex” stream on Oct. 3 his release date was revealed. Steve is planning to drop into the game Oct. 13. Purchasing Steve, or having the Fighter’s Pass already will include his stage, MInecraft World, and associated music with seven tracks. 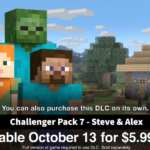 In addition to more information about Steve, it’s likely that there will be more presentations for the future of Amiibos and Mii costumes. As expected with every other DLC character, players who purchase the Fighter Pass will have access to both Steve and his stage whenever he’s officially released.

This article will be updated when Steve’s release date has been announced.