Power Rangers: Battle for the Grid is getting a fourth season of DLC content, this time featuring one new Power Ranger and two villains, including the big baddy of Mighty Morphin Power Rangers, Rita Repulsa.

The main gameplay segment focused on Adam Park, the second Black Ranger from Mighty Morphin, often referred to as the Black Ninja Ranger. It looks like he focuses heavily on using his “Froggy Style” movement to jump around, get up close, and mix up opponents with smokescreens that let him teleport or vanish directly behind his target, even in the air.

Next, one of the main villains from Dino Charge, Poisandra is taking the stage. Very little gameplay of her was shown, but she will be able to call Sledge, another villain from that season, and her husband, to assist her in combat.

The final reveal for the trailer was a motion graphic of Rita Repulsa with her iconic laugh echoing for everyone to hear. She will be the final character released as part of the Season Four Pass, which is going to release on Sept. 21.

According to the infographic shared at the end of the trailer, Adam Park will be added to the game this month, Poisandra will drop in November, and Rita is slated to end the season in December. Since Season Four begins on Sept. 21, players can likely expect Adam to drop day-and-date with the Season Four Pass. 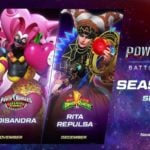 As an added bonus, a Doggie Cruger Commander Uniform skin is also being added for the S.P.D. Shadow Ranger, Annubis Cruger this season too.