The next wave of Super Smash Bros. Ultimate Amiibo is set to launch this fall featuring two of the game’s original DLC fighters, Joker and Hero, Nintendo announced today.

Technically, Piranha Plant was the first DLC fighter to receive an Amiibo. But this is the first time characters from the Fighters Pass will be getting their own figures.

Joker from Persona 5 was the first of Nintendo’s paid DLC and is a popular character in multiple gaming markets. And while his Amiibo doesn’t feature his Persona, Arsene, it does have him striking one of his most famous poses.

Likewise, Dragon Quest is a massively popular franchise in Japan and an Amiibo from that series should sell just as well. Nintendo decided to go with the Luminary from the most recent entry in the franchise, Dragon Quest XI: Echoes of an Elusive Age. 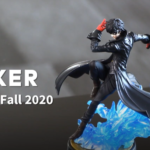 Both Amiibo will release this fall, with a likely release date scheduled for sometime in September.

Recently, Amiibo have been released in spaced-out waves that have frequent drops in September, November, and January. If we do get more Amiibo announcements in the next DLC showcase, they’ll likely be pushed into that January 2021 slot.

With both Joker and Hero getting their figures, that leaves Banjo & Kazooie, Terry Bogard, and Byleth left on the board, along with the recently-revealed Min Min, who will be joining the game on June 29.