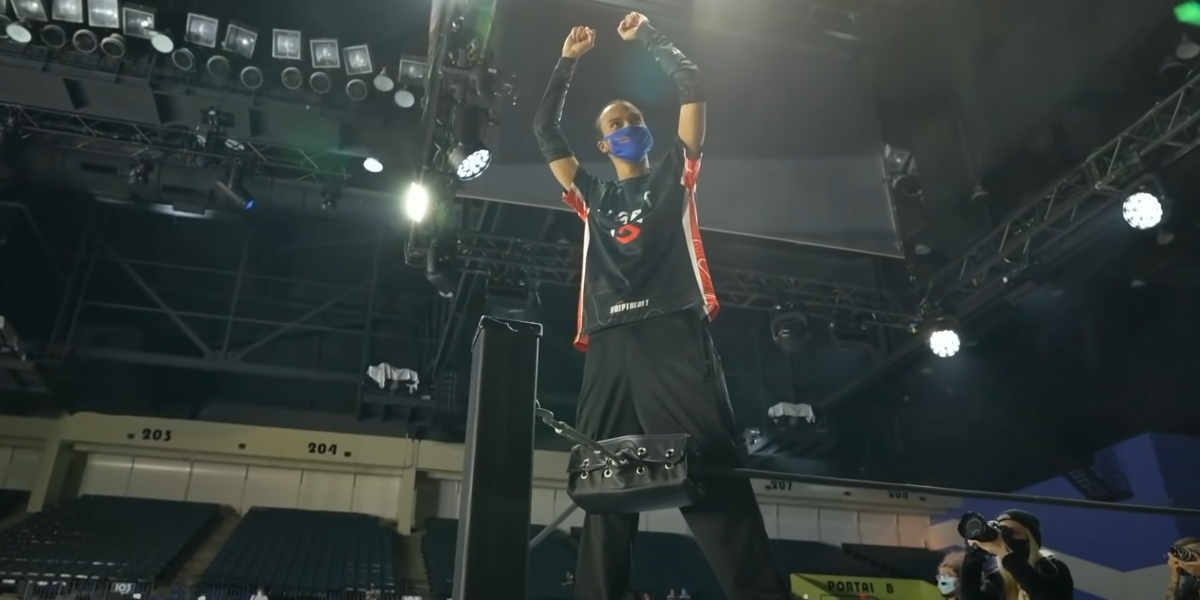 So, when a single player can dominate one of the biggest titles not only in recent history but for the better part of three years, it is a testament to their talent and work ethic.

Enter Derek “iDom” Ruffin, a player who exploded onto the SFV scene at Defend the North 2017 and never looked back, instantly becoming a household name within the FGC.

Between 2017 and 2019, iDom was a rising star, but after winning Defend the North 2019 and finishing in the top eight of all but one Major that year, including Evo and Combo Breaker, he went on to become the Capcom Cup 2019 champion.

From there, he has only gotten better, dominating the online space when it was at its hottest in 2021, even winning Evo Online 2021.

Now, iDom is riding high off of two straight Major wins, claiming both the Combo Breaker and CEO 2022 titles over the last several months—with his eyes now focused on completing the set at Evo 2022 in just a few short weeks.

While preparing for that next challenge, iDom spoke to Dot Esports about his approach to practicing for big events, how his mentality has shifted in response to recent SFV updates, his character usage, and his early impressions on SF6.

Q: You are entering the latter half of the Summer as not only the top players in Street Fighter, but also with a chance to run the table with an FGC triple crown at Evo after winning Combo Breaker and CEO. How excited are you to try and bring home another Major title and do something that has rarely been done in any game?

iDom: It’s funny because going to all of these events, I’m usually just going to play and hang out. But winning, winning is just like the cake on top.

Winning Combo Breaker, I was super excited because I got to show off all of my hard work from playing online. Just, since COVID started I wasn’t really playing super hot because it wasn’t like playing offline where I could play with everyone and we could see each other. But then, Combo Breaker started and it was such a good start.

Now I’m kind of just riding the momentum from CEO and it’s just one more for the Triple Threat crowd.

Heading into Evo, along with other events between now and then, how do you work to ensure your consistency? Any specific training regimens or mental tricks you use to make sure you approach each tournament the same?

I feel like going into all of these events, there’s a lot of mental preparation you have to do to be ready.

Before an event, I’ll always try to destress by playing games I like and that aren’t going to be super stressful. Usually I will try to play a single-player game, like Hollow Knight or something to get my mind off of fighting games. It is a way to keep myself ready for when a huge event does happen or something super competitive and serious is going on.

On different games, you’ve not just been playing Street Fighter recently as at multiple Major tournaments now you have popped up playing Marvel vs. Capcom 3 and top cut. Obviously that game has been around in the FGC forever and you have been playing it for a long time, but how do you manage to stay on top of the new tech in that game while also playing SF.

Marvel 3 has been around forever and I’ve been playing the game for too long. I feel like it’s like riding a bike, I can’t forget how to play it.

But that goes for a lot of games, like even Guilty Gear [Strive] where like, yeah I play them on stream, but when I go to events and get to talk to friends and actually play these games in person, I’m a casual monster. I’m playing everyone. If I’m not on stream playing I’m probably in the back playing with other people. I just like trying to figure out how to get better at the game.

What other games have you been pocketing in the background outside of MvC?

Right now it has really just been Street Fighter, Marvel, and Guilty Gear. I feel like I don’t want to enter too many games because then you get sidetracked and your whole weekend goes to just playing video games. I do like enjoying the scenery and the places I travel to.

You have remained steadfast with your character choices even before your Capcom Cup 2019 victory. How have the changes to SFV over the last two years changed how you play Laura and Poison, and is there a specific reason why you have stuck with them for so long?

Back around Capcom Cup 2019, I would have definitely called myself a Laura main. I was almost exclusively playing Laura back then. But recently, all these events have had me playing Poison way more, though it is still more like a bring the right tool for the right job kind of thing.

I’ve been playing Poison more because I feel like Laura, it isn’t that she’s getting a bit worse, but I feel like more people are figuring her out. So Poison is more so like the wrench you can throw in and no one knows what’s going on. Kind of like unfamiliarity, which I feel is super important in competitions. If somebody doesn’t know how to beat something, then that’s good for you.

Is there any character you have thought about picking up and running with now SFV is in a complete state following the Definitive Update and there is a lot of unfamiliarity with some of the changes? Or was it just some practice and experimentation before you settled back with your mains?

I have been playing G, I think G is actually super good right now. I think he is a slept-on kind of surprise pick character because, like I said, it’s a lot of knowing what this character does and what that character has to offer.

People don’t really know the G matchup too well since a lot of the G players kind of stopped playing or slowed down. So I do keep a G just in case somebody is going in unprepared and doesn’t know how to fight him, or maybe they figure out Poison. It is always good to have another trick up your sleeve.

Your dominance in the Capcom Pro Tour’s return to offline play didn’t come out of nowhere, as you were constantly putting up results during the online period over the course of the pandemic. What has changed for you since things went online in 2020, whether that be in your approach to the game or just in general?

Playing online is like, I want to say mentally refreshing because it is less stressful than playing at Combo Breaker and CEO for recent examples. You know, people in the crowd going crazy, commentators behind you, everyone in the venue is excited. All of that is really good for the scene and community, but like, I’m trying to concentrate and focus.

I feel like people don’t notice every time I play in an event, I always have headphones on. I will get distracted by all the crowd’s energy and that stuff if I didn’t. When I’m playing. I’m trying to concentrate. After the tournament we can go hang out, drink, and do whatever we want. But during the tournament, I want to be completely focused on my play, which is why I think online kind of helped me shape up.

But I did miss the post-tournament hangouts and going around to see all the arenas and stuff. It’s kind of like a double-edged sword.

Is there one element of returning to offline play you’ve most enjoyed? Other than getting to showboat a bit on the main stage?

It’s the camaraderie that I feel everyone misses from FGC events. It’s the hype, the live matches. Even if I’m not playing Mortal Kombat 11 I’ll go watch it and see the MK scene going crazy, or the Killer Instinct and Smash scenes. Whatever it might be.

Being at the venue at an event, it brings a different energy from just sitting at home and playing on your computer or waiting for your next match. It is irreplaceable.

Specifically for Evo, what are you looking forward to the most? Perhaps outside of competing?

Evo is great man. It is like a huge convention where everyone gets to hang out and chill.

The past couple of Evos I’ve always been super concentrated on Street Fighter V, but I also feel like entering Guilty Gear or Marvel has been helping me play better in Street Fighter. I feel that playing one game kind of limits your imagination and what you do in the game. Playing multiple games helps you open your mind and see like ‘oh, what can I take from this game’ and then use it in another one.

Now that I’ve been playing multiple games I feel like I can open my mind and play better at Evo, and hopefully win that triple trifecta.

You’ve talked about it some on stream and on social media, but I have to ask your opinion on the current info we have on Street Fighter 6. Is there anything specific you have seen shown that you are excited about potentially being in the game at launch, or a mechanic that worries you?

From what I’ve seen, every time a new fighting game comes out, it’s always the same thing. ‘This is going to be the return of footsies. We’re finally going back to the golden age of fighting games.’ But you know, my goal is always to try and get around that.

I’m not trying to play like everyone wants me to play. I feel like that’s one of the beauties of fighting games is you get to play as unique as possible. For SF6, all the mechanics and stuff I’ve seen, like the Drive Impacts that give you a wall splay, I’m not entirely sure how all that works. But I feel like when I get my hands on it will be better for me since it is hard to judge without playing it.

Back on a competitive note, what are you looking forward to doing after Evo once you are clear of the slog of Summer tournaments? What other things are you eyeing up post-Evo and before you start prepping for the Capcom Cup?

For Evo, my main goal really is to win. I want to be that triple threat that everyone keeps talking about. I want to try Street Fighter 6 there and see how it feels.

After that, there’s always a plethora of tournaments and I always try to help out the New York scene. So, I’ll probably hop around to events back home and help out the organizers because they are always behind me helping me grow and get better.