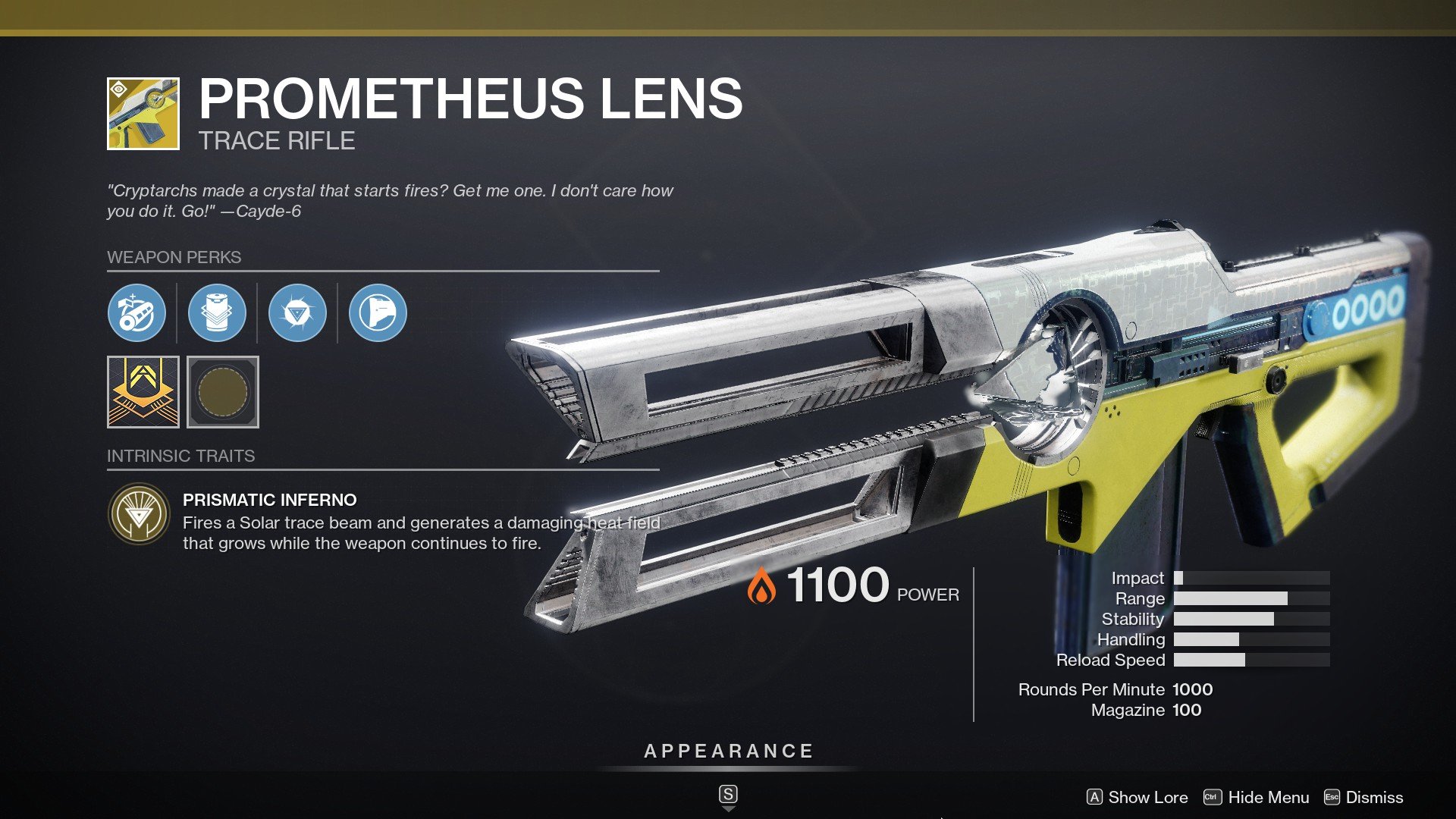 With hundreds of weapons available in Destiny 2, it can make the process of objectively selecting the best of each category challenging. With around 50,000 daily average players just on Steam alone, each player is going to have their own preferential playstyle and weapons.

That being said, when it comes to selecting the best trace rifles in the game, that task is relatively easy: there are only five in total and all of them are Exotic quality. If you have any of these already or have recently found one, they take special ammo, just like shotguns and sniper rifles do. Because they are so rare, when they were first introduced they could only be infused with auto rifles, but now any energy weapon will do.

So without further ado, let’s look at the five best (and only) trace rifles in Destiny 2.

The original trace rifle is Coldheart, a cold fusion-powered laser energy weapon that deals Arc damage. Coldheart was originally introduced as a pre-order bonus prior to the release of Destiny 2, but eventually found its way into the Exotic engram rotation just a few months later by the end of 2017.

Coldheart’s extended barrel, enhanced battery, and hand-laid stock give it a solid range as well as easy-to-manage recoil and stability. But its best trait is Longest Winter, which causes the laser to do exponentially more damage the longer it remains on a single target. It certainly does the job cleaning up less powerful enemies, but Coldheart’s best use is against high-health enemies, especially ones with weak points that aren’t very mobile.

The Void-damage powered Wavesplitter trace rifle was introduced in the Forsaken expansion, originally as a PS4 exclusive. Wavesplitter was designed by the same group, Omolon, that created Coldheart, but instead of cold-fusion, it fires sonic waves.

Wavesplitter has an enhanced battery, a fitted stock, and polygonal rifling, giving it plenty of stability and recoil control as well as an increased magazine size. Its battery can also be supercharged by picking up an Orb of Light, granting a short period of maximum power that starts with an automatic reload. Its Harmonic Laser rotates between three different power levels as the trigger is held down.

Divinity is available via an exotic quest in the Shadowkeep expansion, and requires completion of the Garden of Salvation raid plus some extra steps. It’s a weapon that is sacred to the Vex and very important to them. It deals Arc damage with a huge magazine size.

Like Wavesplitter. it also has polygonal rifling, but has a particle repeater and a composite stock to drastically increase its stability. Its Judgment trait causes enemies that have taken sustained damage from it to get enveloped in a field and stunned. It’s strong against Overload Champions and can also deal burst damage to enemies affected by Judgment.

Ruinous Effigy is another trace rifle that deals Void damage. This one was introduced via the exotic quest during Season of Arrivals. Eris Morn says the weapon is a gift from the Darkness, forged from a branch of the Tree of Silver Wings.

Ruinous Effigy has increased range and stability from its hammer-forged rifling and its particle repeater. Its primary trait is called Transmutation, and causes final blows to collapse victims into Void Transmutation spheres. These can be picked up by the guardian and used to attack or drain other enemy combatants.

Lastly, there’s the Prometheus Lens, the only trace rifle that deals Solar damage. Introduced in the Curse of Osiris expansion, it was created by the Cryptarchs, and as Cayde-6 so elegantly states, it uses a crystal that starts fires. It can be acquired via Exotic Engrams or if you’re lucky, you can purchase it directly from Xur.

Prometheus Lens has a chambered compensator, a projection fuse, and a composite stock. These give it superior range, increased stability, and moderate recoil control. Its Prismatic Inferno fires a solar trace beam that generates a damaging heat field that grows while the weapon continues to fire, and kills return a fraction of the ammo to the magazine. While Coldheart is ideal for singular tough enemies, Prometheus Lens is ideals for wiping out massive waves of enemies, given its ammo replenishment capabilities.