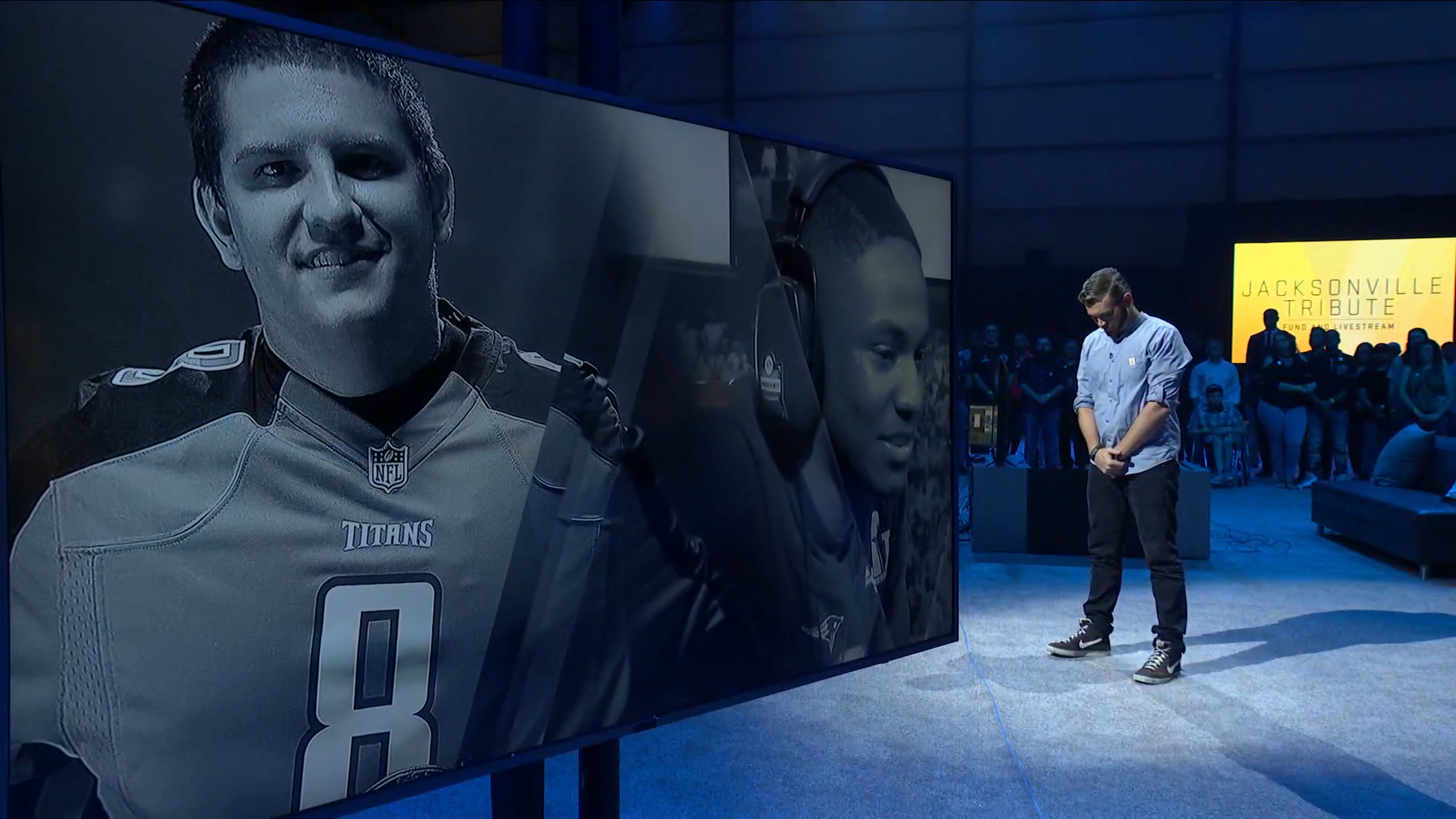 On Sept. 6, EA Sports’ Madden NFL stream booted up for the first time since the Aug. 26 shooting in Jacksonville, Florida that left two competitors dead and many others injured. The black screen flicked to Madden 19’s signature yellow, with a countdown at the top ticking down to the Jacksonville tribute livestream’s start. Tweets of support, many connected to the #WeAreMadden hashtag, scrolled across the display.

Twitch—and, in particular, Twitch Chat—is a place for reactions, just another social media platform where large swaths of people, often anonymous, come for connection, whether it be through genuine friendship, good-natured meme’ing, or harmful trolling. Twitch Chat is not often a place for mourning or grief. Perhaps even more than on other social media platforms, it’s not easy to tell what’s an authentic emotion or what’s a meme when everything’s a meme, even in death.

Related: Jacksonville shooting victims were “kind,” “genuine,” and top competitors, according to friends and loved ones

Madden 19 competitors Eli “Trueboy” Clayton and Taylor “spotmeplzzz” Robertson were killed when fellow competitor David “Bread” Katz opened fire at the Madden Classic qualifying event at the GLHF Game Bar. Like the Jacksonville tribute stream, the shooting was captured live on Twitch as fans watched Clayton and a competitor play digital football. You can hear the shots on stream, and as event attendees started to scream, Twitch Chat realized what happened—people were getting shot. It’s instant, a flood of “omg” and “WTF” scrolling quickly in the chat sidebar, as the chat processes what’s happening.

On last night’s Jackonsville tribute stream, a host appeared on screen in a darkened room, with community members, Madden 19 players, and gaming industry figures all around. He started to speak about the loss of the event, about the beloved players killed and the 11 others injured. The chat is slow, at first—all captured on the Twitch VOD for the event—before a stream of “F”s flood the side bar. This isn’t a rare sight on Twitch; “Press F to pay respects” is a years-old meme that’s common on streams, whether it be to commemorate an exceptionally bad play in-game or a cringe-worthy moment on screen. The origin of the meme is from 2014’s Call of Duty: Advanced Warfare, where the developer included a scene where players can literally push the “F” key to pay respects to a fallen soldier—your character’s best friend—at a funeral. Many players perceived this as forced gamification, as if gamers couldn’t manage sympathy themselves in an emotional video game moment.

Not often is “Press F to pay respect” used to actually pay respects to the dead. But that’s precisely what Twitch chat did as photos and video of Clayton and Robertson took over the screen. As a generation that grew up with meme culture and social media, the Twitch community was genuine in its expression, using the tools it has—memes—to mourn. It’s an extension of social media mourning, which is growing more and more common as our population faces mass tragedy and the loss of public figures.

“You do not define a person by how they handle winning, you define them by how they handle loss, and there’s no greater loss than the loss of life,” Madden 19 game designer Mike Scantlebury, who was present at the Jacksonville event, said during the livestream. “But what will define us is how we handle this loss.”

Social media has changed what it means to mourn, for better or for worse, and Twitch Chat adds another layer of uniqueness to that. The Jacksonville shooting is not the first time a tragedy been streamed on Twitch, and it likely won’t be the last. Suicide threats happen frequently on the streaming site. In February 2017, a streamer, Brian Vigneault, died during a 22-hour marathon stream. The community is learning how to handle the horrifying realities of the world, building out its own idiosyncratic language of grief. (In Vigneault’s case, moderators and fans now use the streamer’s Twitch channel as a memorial space, according to Kotaku.)

Beyond using “F” to literally pay respects to the killed and injured in the shooting, Twitch Chat participants have also created a number of custom emotes to honor the victims. Both Clayton and Robertson are immortalized as emotes, but community members are also using other previously existing emotes, like BibleThump, to grieve. (BibleThump is an expression of sadness, drawn from an image of Isaac from Edmund McMillen and Florian Himsl’s The Binding of Isaac.) These images are as natural and explicitly human as other acts of public mourning, like flowers spread across sites of tragedy worldwide. It’s just a more familiar language to express grief for this specific community.

Some, like Mayo Clinic Health System bereavement coordinator Jeanne Atkinson, thinks expression on social media can be healthy. “[Social media] allows for more public mourning and broader support from people,” she told Headspace in 2017. “It’s not just your close friends that are nearby, but those friends you have in your extended life. That support reduces isolation.”

Communities can be toxic and harmful, but are more often beacons for support, spaces both large and small that allow for meaningful connection. Technology critics often say this generation is more disconnected from reality than ever, but it’s just not true. Spaces like Twitch allow for more connection than ever. Some ascribe a lesser value to these digital connections, but the truth is, an online relationship is just as real as anything else. Support shown during the Jacksonville tribute event, a site of mass mourning, is testament to that, a community uniting around tragedy.

Elsewhere, others argue that social media has made it easy to perform grief or mourning, but hasn’t taught social media users to be “more sensitive about loss.” And that’s true, too. In instances like these, context is everything. “Consider where you fall in the geography of loss, and tailor your behavior in response to the lead of those at the center,” The Atlantic writer Claire Wilmont wrote in June. “Listen.”

The Jacksonville tribute stream continued for nearly two hours, bringing on players and community members to discuss Madden, the community, and how it recovers. A consistent message throughout the stream was that the tragedy would not destroy the community—not the Madden community, not the gaming community. The community, many said, will never forgot those lost on Aug. 26, but that it would have to move forward—its own way to honor the victims. And perhaps symbolically, the Twitch Chat did just that as the stream continued. It moved on the way only Twitch chat could, with memes.