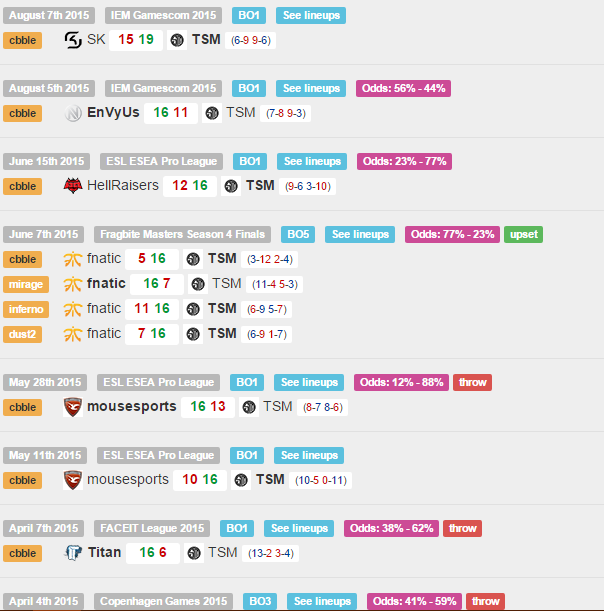 Cobblestone is a map that TSM genuinely tries to avoid. Its a map that they are not as confident on as Karrigan already said yesterday in the post match interview. He also said, they are trying to practise it yes, But considering how less time there is remaining for the Major, it wouldnt be surprising that they would just decide to Perma Ban it all the time anyways.

TSM’s recent cobble Matches that is shown above is not the true picture. Its mainly cause TSM have been on a roller coaster ride recently.  They have been having some really great matches ( when they were number 1 in the world), however after that and nearing APM, they lacked a lot of form mainly cause of their vacation and also due to lack of will probably.

EnVyUs  = EnVyUs + Titan. Both these teams were really good on Cobblestone and as such I dont expect any difference to be coming in their gameplay in this map. Cobblestone is a map that is still quite unexplored for many teams and as such teams that have played on this map a lot already have some decent advantage.

Titan’s KennyS looks awesome but then within these teams we should not try to say one team is better than the other in terms of their aim.

TSM on the other hand seem to be down on this map mainly cause they havent played it as much. Moreover team play on this map suffers due to lack of set strataegies and lack of practise mainly.

Ofcourse in every match between these twp teams u have to remember that these teams are Tier one and aimwise there is really nothing separating the two.  The teams can win despite not being good on the map. But for this map, I would actuall favour EnVyUs on this Map.

My Bet : For Cobblestone I would favor a Medium On EnVyUs here.

Dust 2 is the map that is pretty even between these two teams. Both teams prefer Dust 2. TSM loves it ( and its definitely in their top maps)

EnVyUs which includes the old Titan EnVyus also love Dust 2 .  Both teams were individually very good on this map.

This team being a new team basically wil be more happy on Dust 2 as it requires less strats. But that being said, this match is nothing more and nothing less than a 50  – 50 match

I would just play the odds here. But if this map comes up much later in the day ( like third / fourth map) I would change my outlook depending on how each team has played in the day and how they are in the terms of lives left.

Train is a map that EnVyUs is not particularly good on . They lost to Mouz recently and that despite definitely being the better team in terms of aim. EnVyUs obviouslty havent practised their Train and it showed in their match against Mouz.

TSM on the other hand are a team thats really nice on Train. They have practised a lot on this map and that has inadvertently led to them ignoring Cobblestone. As Karrigan already admitted, They have neglected Cobblestone. Now it wouldnt make sense to Neglect train as well right?

I mean You cannot get the major title winning if you decide to skip two maps out of 7.

TSM are definitely favored on this map and their gameplay against CLG on Train was just about Awesome. They have practised it a lot and it showed in the way they prefired on this map.

They know their angles, they know how to cover each other and their cmomunication was spot on on this map.

ENVYUs also played this map but a lot of their gameplay was based on individual awesomeness. It was like Happy getting 3 kills with AWP one after the other in succession.

Anyways I think Gameplay > Skill always on Train and I will go with TSM on this one.

This map is a deciding map pretty much in terms of these both teams. Both these teams are very good on Inferno. TSM have been really awesome on this map and it showed in their recent matches ( in this LAN) on this map.

EnVyUs have traditionally been awesome on Inferno. However you have to keep in mind that this team is not the same anymore. Its a new team with French Players. Inferno is a map that is pretty CT sided, but considering how often this map is played ( probably 2nd most played map after Dust 2?), We have to be ablet to believe that EnVyUs knows this map In and Out. EnVyus looked a bit bad against CLG on Inferno and yuo have to keep in mind that Inferno is CLG’s worst map. That being said , EnVyUs had waking up issues on that particular day. We already know how bad EnVyus performs when they dont sleep well ( right ? )

On this map I would favor EnVyUs highly cause of their individual performances on this map. Also this seems to be one of the few maps that they have practised a lot in the smallamount of time they have had together.

My Bet : Low to Medium on EnVyUs Inferno

EnVyus have traditionally always Perma banned mirage in their first Map Ban. Ofcourse that used to change as they neared the Finals of any tournament. I dont know if you have been following me but if you have you would have noticed That I used to put in the Veto systems and as such I remember EnVyUs always banning Mirage in the group stages right upto the Finals.

That does speak of a lack of Confidence on this map. Titan on the other hand also havent played Mirage a lot. They have always avoided this map and yet there have been some really wierd games that they have participated in. Remmebr that game when Titan were up 11-4 on T side mirage against Virtus Pro and then VP came back from 4-11 to win the map? GG right?

Anyways I dont think the new EnVYUs should have improved as much as they should in order to defeat the team named TSM who are really been together and have proven themselves on this map time and again.

You might ask, TSM will not want to show off their strats on this tournament. But you have to remember that they have a higher chance of earning money from winning this tournament ( 50% to be exact) rather than try to win in the Majors ( where you add some more teams such as Fnatic , NIP etc)

TSM’s CT side on Mirage is something to be tried to emulate from and EnVyUs looked relly lost on some of their T side. ( albeit on Other maps )

My Bet: Maybe HIgh on TSM

Cache is a map that EnVyUs and Titan really thrived on. Its a puggy map and as such EnVyUs have been really good on it ( from what we have seen so far)

This current EnVyUs just like the last EnVyUs accords high priority to Mid. They have had multiple strategies regards to their mid play. Considering that we have seen very less games yet, Its not something that should be accorded high importance though. They have played mid, agressive ( 2-3 ppl on mid) . They also have played mid super passive, watching mid from A and from CTB.

So its not yet set in stone, how they approach this map. however Cache is probably a 8-7 CT side map in my opinion. Its  a map that can actually go to become a T side map if certain rounds go in the favor of the terrorist side.

TSM have been good on this map but they have not been phenomenon. Also Cache is a map that is OK for TSM. They arent good on it, neither are they bad on it. I think I would favor EnVyUs for this map

My Bet : Medium to High on EnVyUs

Let me know what do you think About this post 🙂